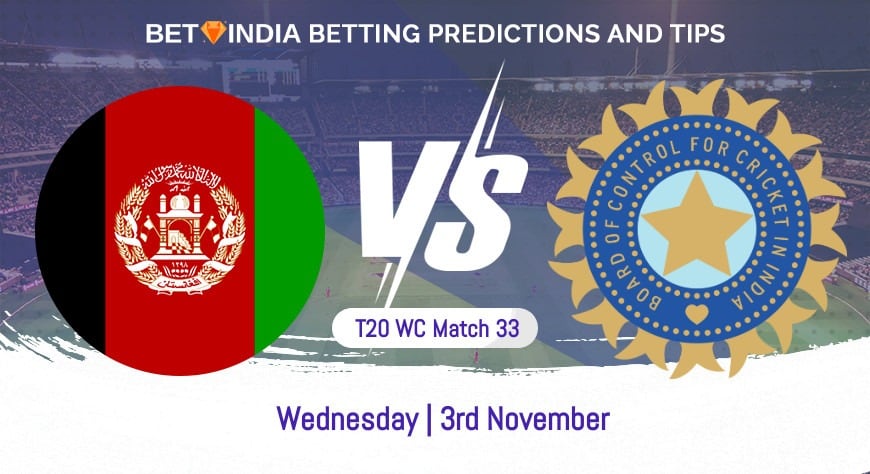 Two teams who have had contrasting World Cups till now meet on 3rd November as Afghanistan, who have two wins, take on India, who are yet to win a match in this year's World Cup.

India are staring elimination in the face and need three big wins in their remaining three matches to have any chance of qualifying for the semi-finals. This won't be an easy task by any means as they face a very competitive Afghanistan side who are right at home in these conditions.

Despite the losses, India are the heavy favourites at 1.20, with Afghanistan being priced at 4.50.

Once again, it was the bowling that ruled supreme and contributed to Afghanistan's victory over Namibia, with Naveen-ul-Haq taking three wickets and Mujeeb Ur Rahman also taking three. Ur Rahman has been one of Afghanistan's leading lights in this tournament, and he is 3.75 to be his side's leading wicket-taker.

The inquest has begun into India's failures so far this tournament; the manner of their defeat against New Zealand was very concerning, with the Indians looking afraid to commit to their shots and being very protective of their wickets. It wasn't a surprise to anyone watching to see them limp to such a low total. Against a side like New Zealand, it was never going to be enough, and the Kiwis chased down the total with over five overs to go.

There were barely any bright sparks in the Indian team following yet another sub-standard performance, but Ravi Jadeja's 26 off 19 balls showed what could be done when a batter has positive intent.

You have to think that India are going to be far more aggressive in their mindset in this match, and we like the odds of KL Rahul being India's top scorer at 3.75.

India will be pleased to see the back of Dubai and move their campaign to Abu Dhabi with the hope that a change in venue will bring about some better results.

In total, there have been 51 T20 International matches played at the stadium, with the team that bats first having won 23 times and the team that bats second 28 times. The team batting second has won on all occasions at this venue in this World Cup.

Betting Predictions for Afghanistan vs India

Let's take a look at a few important betting predictions for Afghanistan vs India:

In normal circumstances, you would back India to win this match nine times out of ten; however, they do head into this match short of confidence, and Afghanistan will smell blood.

Odds of 1.20 for a side that has looked quite average in comparison to some of the other nations in this tournament do look very much on the short side.

India's batsmen will need to show much more attacking intent and whether India can do that in the face of the barrage of spin they are bound to face is a different matter altogether.

It's unimaginable to think India could lose another match, so with caution, we will back them to win.

There could be some value in backing Rishabh Pant to top score for India in a match where value is hard to find.

Pant, perhaps more than other batsmen, looked incredibly frustrated not to be finding the boundary with regular frequency, and we think this match is where he will put it right. On his day, he can score runs at a breathtaking pace, and we believe another one of these days is just around the corner. Odds of 8.00 could be a good way to bet.

Place a bet on 1xbet by registering with the code 1BETINDIA1 and get a 130% bonus of up to Rs. 13,000 if you bet on Rishabh Pant to be India's top batsman in Afghanistan vs India T20 World Cup.