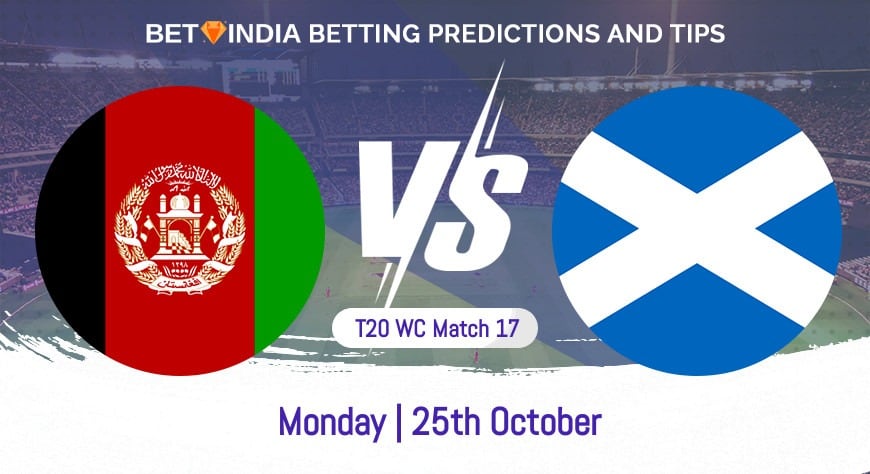 Next up in the super 12s is Afghanistan vs Scotland. It's a sign of how far Afghanistan have progressed as a cricketing nation that they were ranked high enough to progress straight through to the Super 12 phase and are now one of the world's leading lights in the T20 format.

Afghanistan have the ability to cause some upsets and have a strong outside shot of qualifying out of their group due to the fantastic spin options they have in their side. On pitches that have been slow and offered tremendous turn and grip for the spin bowlers, they can cause every team they face problems.

Scotland enter the Super 12 phase on a real high courtesy of three fantastic victories in round 1. The Scots have already caused the shock of the tournament by beating a strong Bangladesh team and then followed that up with convincing victories over both P.N.G. and Oman. Afghanistan will hold no fears for the Scots, and they will really fancy their chances of winning their fourth match of this tournament.

The bookies have Afghanistan as the heavy favourites, with them being priced at 1.29. The Scots can be backed at 3.75.

Due to the political tensions in Afghanistan, many were wondering if Afghanistan would even be able to compete in this tournament. But they are here and will hope to cause a few upsets in the Super 12 phase.

Afghanistan, for obvious reasons, haven't played a great deal of cricket; they beat Zimbabwe in March in a three-match T20 series and enjoyed a warm-up victory against the West Indies before losing to South Africa. They would have wanted to play more heading into the competition but will be hoping some of their more experienced players will see them through in their first match.

As usual, when Afghanistan play at this level, much rests on the performances of star spin bowler Rashid Khan. Khan can be a devastating performer when at his best, and an argument could be made that he could get into most sides competing in this year's World Cup. Khan is priced at 1.83 to take over 1.5 wickets in this match.

Another name to keep an eye on is Rahmanullah Gurbaz. The 20-year-old wicketkeeper-batsman is an emerging star and someone who Afghanistan consultant coach Andy Flower calls the best batsman on the team. Gurbaz is 3.75 to be his team's top run-scorer.

Scotland have returned from the cricketing wilderness in this World Cup and have so far been the tournament's shock team. In a group comprising Bangladesh, Oman, and P.N.G., the Scots would have quietly fancied their chances to qualify but most likely in second place. Their World Cup got off to the dream start when they beat Bangladesh by six runs. They then did a masterful job of staying professional with good solid wins against both Oman and P.N.G. The Scots have probably achieved what they set out to do in this tournament. The Scots won't feel any pressure at this stage but won't be overawed by the challenge ahead of them.

The key to Scotland's progress has been the form of all of their key batsmen, Matthew Cross, George Munsey, and Richie Berrington. The Scots need all three of their star batsmen to keep playing well as they will be relied upon to score the bulk of their runs. We have been particularly impressed with Richie Berrington, who has scored a not out 31 and a 70 in his last two innings. Priced at 5.00 to be Scotland's top run-scorer, that price could be a bit of a steal.

This contest will take place in Sharjah, which will be the first competitive match for both sides at the venue.

When it comes to hosting international T20 cricket, Sharjah is a young ground and has only played host to 15 matches. Sharjah can be slow, as indicated by the first innings average score of 141. For those batting second, the average drops all the way to 125.

Teams that bat first tend to have more success, with 9 wins for these sides compared to 6 for the chasers.

On a deck that will aid the spin bowlers of Afghanistan, it's not hard to see why they are the overwhelming favourites.

Betting Predictions for Afghanistan vs Scotland

Let's take a look at a few important betting predictions for Afghanistan vs Scotland:

This contest will be a great indicator to see whether the sides that have competed in the first round have any added momentum heading into the Super 12s. Scotland have had three competitive matches that could have set them up perfectly for this match, whereas Afghanistan head into this match devoid of any proper competitive action since March of this year. Scotland will want to make the most of their experience playing in the conditions and get off to a fast start.

It's been predicted by Afghanistan management that potentially up to 12 overs of the 20 that Scotland will bat could be dominated by spin. We saw on Friday that Sri Lanka used the Sharjah pitch to absolute perfection, with their spinners causing all sorts of problems for the Dutch batters, bowling them all out for 45. There is a chance that we could see something similar here; the game will purely hinge on Scotland's ability to handle spin. If the top order fails, the Scots could be in for a long day.

Place a bet on Bet365 and get a welcome bonus of up to Rs. 4,000 if you bet on Afghanistan to win in Afghanistan vs Scotland T20 World Cup.

Place a bet on Betway and get a 100% welcome bonus of up to Rs. 2,500 if you bet on the toss outcome in Afghanistan vs Scotland T20 World Cup.

We have already highlighted the form of Richie Berrington, but another batsman to keep an eye on is George Munsey. Munsey has had an ok tournament, scoring 20, 15, and 29 in his three innings; however, Munsey was Scotland's best player in the qualifiers before the tournament, scoring the most runs in the tournament. That tournament was held in the U.A.E., so he has proved he can handle these conditions. Priced at 3.75 to be his team's top scorer, we will be hoping Munsey can prove his prowess on these tricky surfaces once again.

Place a bet on 1xbet by registering with the code 1BETINDIA1 and get a 130% bonus of up to Rs. 13,000 if you bet on George Munsey to be Scotland's top batsman in Afghanistan vs Scotland T20 World Cup.