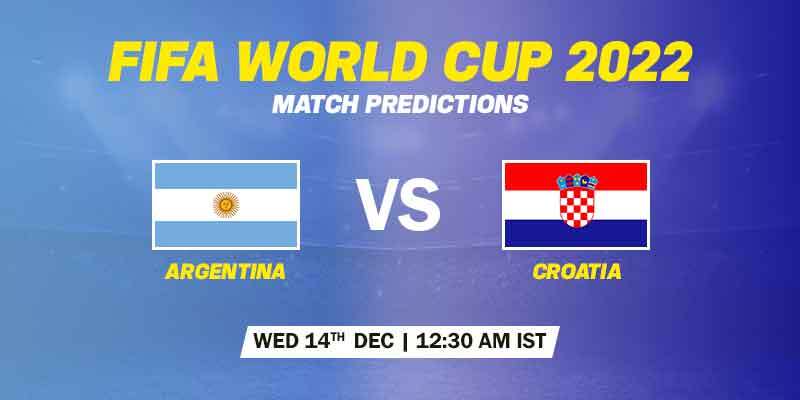 Argentina vs Croatia: The quarter-finals of FIFA World Cup 2022 will be remembered for a long time as the day witnessed some thrilling matches. Croatia defeated Brazil through penalty shootouts and Argentina defeated the Netherlands in the same format.

It is now time for Argentina and Croatia to meet face-to-face in the semi-final game on 14th December. Both teams have a fascinating history in the history of football. They both met in 1994 for the first time and since then both the teams have met five times and both the teams have won two games each with one draw.

Argentina vs Netherlands was a visibly aggressive match as it produced 15 yellow cards. Both teams scored two goals each and the game was won by Argentina through penalty shootouts.

It seems like Messi and his men are heading towards a big win and one of the biggest wins in their entire careers.

Croatia turned out to be a defence maestro against Brazil as the whole game went goalless till the last minutes. It was in the extra time both the teams converted their chances and scored one goal each.

The game went to the penalty shootouts and Croatia scored a victory and eliminated Brazil from the tournament.

Argentina was ahead of their opposition in their quarter-final game against the Netherlands. Molina, with an assist from Lionel Messi, scored a stunning goal in the 35th minute and Messi himself scored a goal in the 73rd minute.

However, Van Gal had something else in mind as he sent his trump card Wout Weghorst and he scored two goals in the 83rd and 90+11th minute. However, the game went to the penalty shootouts and Argentina won the fixture and qualified for the semi-finals.

Croatia came out as a powerhouse and completely frustrated their opposition Brazil in the quarter-final fixture. The match went scoreless and Brazil got the first opportunity to score in the 105+1th minute as Neymar Jr. converted an assist.

However, Petkovic had different plans as he was able to score in the 117th minute and draw the game again. Croatia won the game through the penalty shootout and qualified for the semi-finals.

As we reach the business end of the FIFA World Cup 2022, Argentina vs Croatia will be a game of thrills and aggressive approach. We predict Argentina’s win by 2-1.

Croatia is lacking when it comes to its attackers. They are one of the best defenders but in the semi-finals, they won’t be able to hold Argentina’s strikers from scoring goals and we predict Argentina’s win by 2-1. For some great odds create an account at bet365.