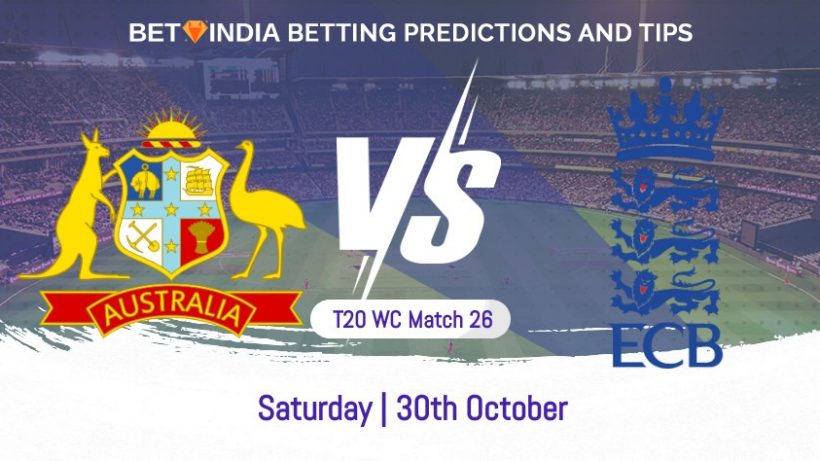 It's a match that many have looked forward to since the draw for the Super 12 phase was made, as two old rivals meet in what is a pivotal matchup – Australia vs England. With both sides having won their opening group games, the winner of this match will put themselves in a commanding position to qualify for the semi-finals.

It's a tough one to call, with the two sides barely being separated by the bookmakers. England, who many regard as the favourites for the tournament, can be backed at 1.63, with Australia priced at 2.30.

Despite coming into the tournament under a cloud of pressure and many questions to answer, Australia have to be delighted with their start to this year's World Cup. Both their performances so far have been controlled, and from the first ball being bowled, Australia have looked full of confidence. Wins against South Africa and Sri Lanka have set them up perfectly for this contest.

It must have been so pleasing for Australia to see that many of their big names are in good form, with Steve Smith, Glenn Maxwell, and David Warner all amongst the runs and all their main strike bowlers taking wickets.

A man who has done exceptionally well against England has been Josh Hazlewood, and the pacer can be backed at 2.25 to take over 1.5 match wickets.

England started out the tournament as second-favourites to win the entire competition, but after India's defeat to Pakistan, they are now the outright favourites.

England have so far proved why they are the rightful favourites, swatting away both the West Indies and Bangladesh with the minimum of fuss. Like Australia, many of England's key men are playing well, such as Jason Roy, Joss Buttler, Adil Rashid, and Moeen Ali. The only problem for England is that due to the great performances of their top-order, most of their middle-order are yet to bat, which could prove a little problematic here!

When these sides meet in this format of the game, Adil Rashid often puts the Aussie batsmen into a spin, and odds of 2.20 for him to take over 1.5 wickets could be the way to play here.

It's fitting that a match of this magnitude is being held in Dubai, where the final will also be played. Both England and Australia have played one match here during this tournament and have won on both occasions.

In total, there have been 65 T20 contests held at this stadium. There have been 34 games where the side batting first has won, and 31 games have been won by the side batting second. The average score for the first innings is 144, with the second innings average at 122. So far, during this World Cup, the team that has batted second has gone on to win the game.

Betting Predictions for Australia vs England

Let's take a look at a few important betting predictions for Australia vs England:

England have dominated the recent matchups between the two sides in this format, and they will be confident of winning this contest. All form goes out of the window when these two foes meet, and it really is a tough one to call.

These sides met twice in the recent 50 over World Cup, with Australia winning in the group phase before England thrashed them in the semi-finals. Where Australia have the edge is if their bowling is on point, then they have a very good chance of winning this match.

The key wicket for England will be Steve Smith; for so long, Smith seems to have had England's number, and if he bats well, he will aid Australia in posting a competitive total.

In what could be a classic, we will side with England to narrowly come out on top. They know what it takes to win these big matches and will be looking to put down a significant marker here.

As we have iterated in previous previews, a batsman who is often overlooked is Jason Roy. Roy performed nicely in England's last match, scoring a bullish 61 off just 38 balls. Roy also tucked into the Australian bowling back in the previous 50 over World Cup.

He is a man for the big occasion, and we think the odds of 4.33 could be one of the better bets on offer.

Place a bet on 1xbet by registering with the code 1BETINDIA1 and get a 130% bonus of up to Rs. 13,000 if you bet on Jason Roy to be England's top batsman in Australia vs England T20 World Cup.