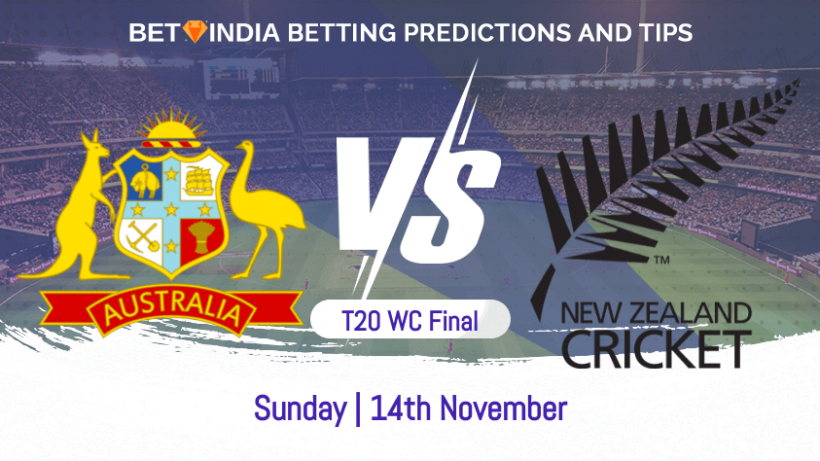 After almost a month of intense cricketing action, twenty teams have been whittled down to just two with this year's T20 World Cup final between Australia vs New Zealand.

It is fitting that a tournament of this magnitude is being contested between two historic rivals, with each side looking to clinch their first-ever T20 World Cup title. These two have a history as  Australia defeated New Zealand in 2015 50 over the World Cup final. After several near-misses, a win for New Zealand would be their first major white-ball tournament victory.

In a tight betting market, it's Australia who are the favourites at 1.58. New Zealand, who are more than used to playing the underdog role, can be backed at 2.38.

We predicted that Australia would win their semi-final clash against Pakistan and reach their first T20 World Cup final since 2010. On paper, it looked like a clash that just favoured Australia, mainly due to their superior seam bowlers and generally more superior batting lineup.

Similar to the England New Zealand clash, Pakistan would have been pleased with their total of 176, but there was just a feeling it might have been 10 runs short of a really good total, and so it proved.

As they historically do, Australia were able to pick up some vital wickets in the 18th, 19th, and 20th overs. Despite conceding 14 runs off their final over, the Aussies would have been pleased with how they limited the impact of the last few death overs.

The top wicket-taker for the Aussies was Mitchell Starc. Starc hasn't been at his best this tournament, but his two wickets showed the full use of his experience and class. Starc, to be Australia's leading wicket-taker in the final, is priced at 3.60.

When covering New Zealand's matches, we have been incredibly wary of writing off Kane Williamson and his men all the tournament. New Zealand's recent tournament record reads as beaten finalists in 2015 and 2019 50 over World Cups and beaten semi-finalists in the 2016 and 2010 T20 World Cups. They are, of course, the first-ever World Test Champions and are the best multi format team in the world.

Following 2019's heartbreaking final defeat, no other nation deserved to be in the final than New Zealand, and they certainly earned their spot.

It was a strange semi-final, one that England seemed in control of. Posting 166 on a slow, unpredictable pitch, England had New Zealand exactly where they wanted. That was until Jimmy Neesham strolled forward and hit 27 off just 10 balls, with 23 coming off the 17th over alone. Once Neesham departed, it was opener Daryl Mitchell who finished off the job scoring 72 off just 47 deliveries, which included two sixes in the 19th over to see the Black Caps through to the final with still an over to be bowled.

An underrated bowler for New Zealand has been spin bowler Ish Sodhi. Sodhi took the vital wicket of Joss Buttler and has been very economical all tournament. He is priced at 5.00 to be his side's top scorer, and that could represent some real value.

This match will be held in Dubai, where Australia beat Pakistan in the last of the semi-finals. New Zealand have beaten both India and Scotland here.

Let's take a look at a few important betting predictions for Australia vs New Zealand:

Few would have predicted that the final lineup would be between these two sides, but it's fitting that a game of this nature is contested between two giants of the game who are epic rivals.

Both of these teams reached this final following spookily similar performances in the semis. Both teams batted second and were left to chase 60 runs down in the final five overs of their innings.

Both teams made mincemeat of the total and achieved their total with over an over to go. Both sides were excellent across all three phases of the games, which could mean this final could be one for the ages.

Australia are perennial winners, and there are members of this team who have won major tournaments before; New Zealand always seem to fall at the final hurdle, so it will be interesting to see how they adapt to the pressures of yet another final.

These two played a five-match T20 series earlier this year, with New Zealand winning 3-2, which shows how tight this final could be.

New Zealand have received a dash of bad luck with the loss of Devon Conway, who is one of their classier performers, and he could be a big loss.

Similar to the match against Pakistan, this contest could well come down to the Australian seamers vs the top-order batsman of New Zealand. It would be brave to back against the class of the Australian bowlers, and we think they could prove the difference in what is bound to be a match of fine margins.

Place a bet on Bet365 and get a welcome bonus of up to Rs. 4,000 if you bet on Australia to win in Australia vs New Zealand T20 World Cup.

If ever there was a match for a captain's knock, then this is the one.

By his high standards, Kane Williamson has had a poor end to the IPL and World Cup, but they say form is temporary and class is permanent, and we are backing Williamson's class to come to the fore here.

He knows this opposition well, and after experiencing a multitude of heartbreaks, this could be Williamson's and New Zealand's time.

Place a bet on 1xbet by registering with the code 1BETINDIA1 and get a 130% bonus of up to Rs. 13,000 if you bet on Kane Williamson to be New Zealand's top batsman in Australia vs New Zealand T20 World Cup.