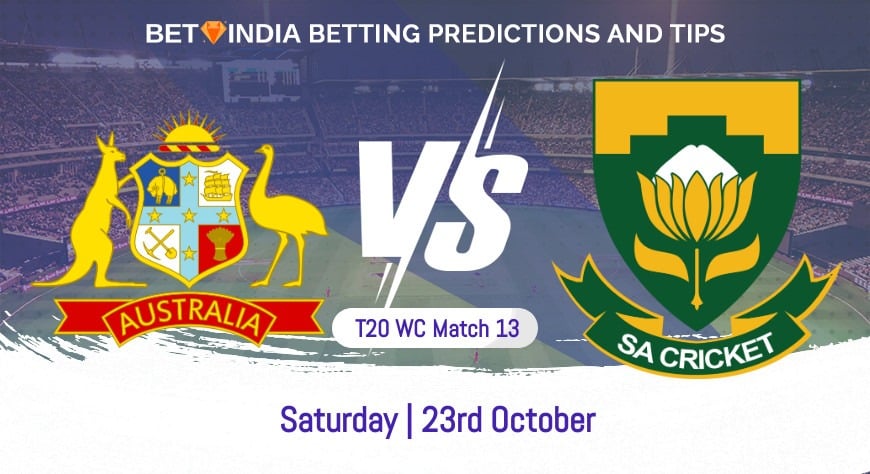 Two cricketing giants start the Super 12 phase of this year's T20 world cup on Saturday the 23rd of October, with Australia vs South Africa. These two teams locking horns would be a sure-fire classic.

Tensions will be high between two cricketing nations that don't get on particularly well, particularly after the sandpaper scandal back in 2018.

In a group that contains England, Bangladesh, and the West Indies, room for slip-ups is at a minimum, and both sides will want to start their Super 12 campaign off with a win.

As an indicator as to how competitively matched these sides are, both are priced at 8.00 to lift the World Cup in just a few weeks' time.

Worryingly, it is against spin bowling that Australia struggle, as indicated by their recent struggles in both Bangladesh and the West Indies. The Australian batting lineup could only average 16 against spin on these tours. Playing on slow-turning pitches in the UAE could expose some weaknesses further.

One man who will defy that figure is Steve Smith. Due to his role in the sandpaper scandal, Smith is a divisive figure between these two teams, but he comes into this match in good form after having scored 35 and 57 in Australia's two warm-up matches. Smith top-scored for his country on both occasions and is priced at 5.00 to do so again, which we think is a generous price.

It's quite a remarkable stat that despite the talents of many South African sides in the past, South Africa have never won a cricketing World Cup in any format. They have always been the nearly men, and despite having a strong side for this year's World Cup, we wouldn't have them as one of our tournament favourites.

However, one area that could change that school of thought is their bowling attack – which has to be one of the best in the world and tournament. Spin bowlers Keshav Maharaj and Tabraiz Shamsi could wreak havoc out on the turning pitches. Anrich Nortje has completed a fairly successful IPL stint where he was one of the tournament's most economical bowlers, averaging just over 5 in the powerplay overs.

Then there is main strike bowler Kagiso Rabada. Rabada also had a good showing in the recently completed IPL, but when he represents his country, he seems to struggle, only taking more than one wicket in three of his last 14 T20 matches. We think that could change here, and at 2.10 for Rabada to claim more than one wicket, that could be a good bet.

This contest will take place in Abu Dhabi at the Zayed Sports City Stadium.

The Zayed Sports City Stadium is one of the finest in the world and still reasonably new, having only opened in 2004. It's a pitch that is one of the most balanced for batters and bowlers but can be on the slow side.

The average score for the first innings is 140, and for the second, this drops down to 122. Look for the side that wins the toss to try to make the most out of the batting conditions and bat first.

Let's take a look at a few important betting predictions for Australia vs South Africa:

This is a tough one to call. The oddsmakers have the Australians as favourites, with them being priced at 1.73 to win. The South Africans can be backed at 2.10.

In this match, we are going to side with the underdog and pick South Africa to win. We think the key could be Australia's potential weakness against spin bowling, and in both Shamsi and Maharaj, South Africa have two class performers who could cause the Aussies some grief.

You write off Australia at your peril, and they have the talent and personality to win this match, but it's hard to be inspired by their recent record in the T20s.

Place a bet on Bet365 and get a welcome bonus of up to Rs. 4,000 if you bet on South Africa to win in Australia vs South Africa T20 World Cup.

Either team to win the toss can be backed at 1.91. On a pitch that can be slow, the side that wins the toss will want to bat and make the most of the batting conditions before scoring gets harder as the game goes on. Any score over 150 should be very hard to chase.

Place a bet on Betway and get a 100% welcome bonus of up to Rs. 2,500 if you bet on the toss outcome in Australia vs South Africa T20 World Cup.

We have already highlighted the recent good form of former Aussie Captain Steve Smith, but another player in fine form is Glenn Maxwell. The ‘big show', as he is famously known, was in scintillating form in the IPL, where he scored four half-centuries. Having already played well in the conditions, Maxwell should have a form advantage over some of his teammates.

Maxwell is priced at 5.50 to be his team's top scorer, and if the batsmen above him fail, this could be one of the best bets on offer.

Place a bet on 1xbet by registering with the code 1BETINDIA1 and get a 130% bonus of up to Rs. 13,000 if you bet on Glenn Maxwell to be Australia's top batsman in Australia vs South Africa T20 World Cup.