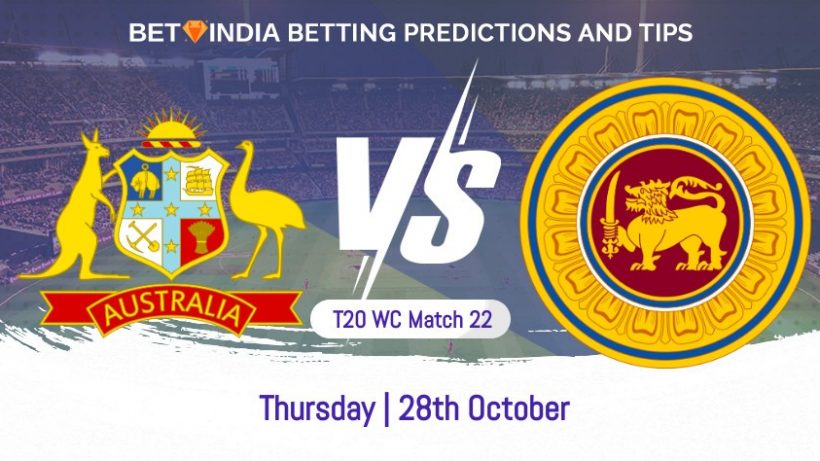 The second round of fixtures is well underway in the Super 12 phase of the tournament, and two sides that got off to a winning start in their respective first games, clash next in Australia vs Sri Lanka.

Despite some concerning form heading into the tournament, Australia will be delighted with a victory in their first match against South Africa, but they made hard work of it. Needing only 119 to win, the Aussies reached the South African total with just two balls remaining.

Sri Lanka, who had already won three matches to reach the Super 12 phase, faced their biggest challenge to date with a match-up against fellow group stage qualifiers, Bangladesh. Sri Lanka made it four wins on the bounce and passed their hardest assignment to date by beating Bangladesh by five wickets. Set a tough total of 171, the Sri Lankans showed their prowess with the bat, chasing down the total with an over remaining.

A win for either side would set them up really nicely for the rest of the group and put them in a great position to qualify for the semi-finals. The bookies have the Aussies as the heavy favourites, with them being priced at 1.4. The Sri Lankans can be backed at 3.00.

It’s never a surprise to see an Australian team that is well fancied ahead of any major international cricket tournament. But the Aussies headed into this tournament with all sorts of form questions to answer. T20 hasn’t been a happy format for them after they had lost series to both Bangladesh and the West Indies. Head coach Justin Langer is under the microscope as many in Australia are calling for a coaching change.

The Aussies' winning start will release some of the pressure around the team, but it wasn’t all plain sailing. They will be delighted with their bowling efforts, with Mitchell Starc, Josh Hazlewood, and Adam Zampa all contributing with two wickets each. With the bat, it was Steve Smith who top-scored with a controlled 35 off 34 balls. They would have liked to have knocked off the total quicker but did just enough to chase down the South African total with just a few balls to go.

No matter the format, Josh Hazlewood is a class bowler, and odds of 2.10 for him to take over 1.5 wickets look a great bet to us.

Even with having to qualify for the Super 12 phase, Sri Lanka have looked like one of the best teams at the tournament. Their bowling in the group stage was exceptional, as they restricted all three of their opponents to very modest totals. In the Super 12 phase, it was their batting that came to the fore.

With scores throughout the tournament being around the 130-150 mark, Bangladesh, in their innings, scored a big total of 171, which looked like it would be a very difficult chase. However, Sri Lanka made mincemeat of the total, scoring the 172 they needed with an over of their batting to go.

Star of the innings was Charith Asalanka, who produced one of the best innings of the tournament so far, scoring an 80 off just 49 balls, which included five 6s. Asalanka to top score for his side again is priced at 4.50, which could represent some real value.

Let's take a look at a few important betting predictions for Australia vs Sri Lanka:

It’s rare that the bookies and oddsmakers get things wrong, and on their day, Australia have both the batsmen and the bowling attack to blow any side in the world away. But their recent T20 record is scratchy, and they have proved over the last year that they do have a weakness against spin.

This tournament will see the majority of wickets being taken by spin bowling, and Sri Lanka have some of the finest spin operators around. If Sri Lanka can get stuck into the Australian batting lineup and frustrate them, we think the Sri Lankans have more than enough of a chance to be competitive in the match. The Sri Lankans are playing on a surface that is more natural to them, and so far, they have looked right at home.

Hoping that Sri Lanka end up having one of their better days (we know that every now and again, they throw in a shocker), we are going to back them to pull off the shock victory.

We have already sung the praises of Steve Smith, but another batsman who could be worth a bet to score the best score for Australia is Mitch Marsh.

Marsh is perhaps a bit of a dark horse in this Australian batting lineup but has a good recent record. He was Australia’s shining light in the recent tour of Bangladesh, scoring the most runs for his team, and clearly does well in these types of conditions. He only scored 11 in the game against South Africa, but he could bounce back here, and odds of 5.50 could be worth chancing.

Place a bet on 1xbet by registering with the code 1BETINDIA1 and get a 130% bonus of up to Rs. 13,000 if you bet on Mitch Marsh to be Australia’s top batsman in Australia vs Sri Lanka T20 World Cup.