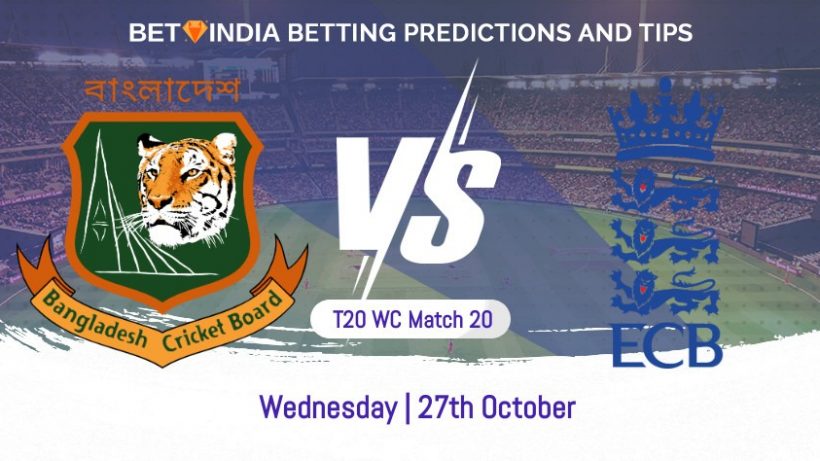 Bangladesh vs England will be played at Zayed Cricket Stadium, Abu Dhabi, on 27th October 2020. England are coming into this match after a massive victory over West Indies, which has inflated their NRR to close to 4. On the other hand, Bangladesh suffered a defeat at the hands of Sri Lanka in their first match of the T20 World Cup 2021.

Bangladesh had to struggle to get into the final 12 teams of the T20 World Cup 2021. Their loss against Scotland meant they finished second in their qualifying group, not a very confidence-boosting performance just before the main event. In their first match against Sri Lanka, Bangladesh batters found some form with the bat and posted a decent total of 171 runs on the board. Nonetheless, despite taking more wickets than they lost, Bangladesh lost the match comprehensively in the 19th over.

Mohammed Naim and Mushfiqur Rahim showed form with the bat – both scored half-centuries – while the ever-dependable Shakib Al Hasan bowled 3 overs for 17 and picked up two key wickets at the top of the order. It was good to see some runs at the top in the Bangladesh batting line-up, which has been mainly dependent on the trio of Mushfiqur Rahim, Shakib Al Hasan, and Mahmudullah. Shakib’s promotion in batting to number 3 is likely to continue.

Liton Das and Shakib Al Hasan, both of them priced at 3.75 on Bet365, will be the key players for Bangladesh in this crucial encounter.

England are heavy favourites for this World Cup, and they played like one in their first match against the mighty West Indies. England’s white-ball cricket has been top-notch in the last few years. They continued that by bowling West Indies out for meagre 55 runs and then chasing the target with ease in the 9th over. They are sitting at the top of the table with this humongous win.

The 5 bowlers England bowled in the match against West Indies were all among the wickets, with Adil Rashid outperforming everyone with 4 wickets. It’s a remarkable feat given that England bowled just 14 overs, out of which Adil bowled just 2.2 overs, giving away just 2 runs for those 4 wickets. England are unlikely to tinker with this bowling attack. With Roy and Buttler at the top and Morgan, Malan, and Bairstow in the middle, this is a very formidable batting unit as well.

Jos Buttler and Adil Rashid are bookies favourites from the England Camp with prices set at 3.50 and 3.40 respectively at Bet365.

Abu Dhabi is a tricky pitch, as was evident in the low-scoring match between South Africa and Australia a few days back. Batters need to spend some time here to get used to the pace of the wicket. It is going to be a nice day in Abu Dhabi with plenty of sunshine and a temperature of around 33 degrees, and no possibility of rain.

Betting Predictions for Bangladesh vs England

Let's take a look at a few important betting predictions for Bangladesh vs England:

England are huge favourites to win this match against Bangladesh, and why not. They have a batting order that is aggressive from the word go. Their pacers have pace along with many variations, and in Adil Rashid, they have one of the best T20 leg-spinners in the world. Add to it the fact they demolished West Indies – one of the best T20 teams in the world – in the first match, and this makes them super favourites to win this game. Bangladesh would have to outperform England in every single department to have any chance of winning this match.

About 55% of the matches have been won by the team batting second at this venue in T20Is. As this is a tricky surface, bowling first here helps get the measure of the state of the pitch on the given day, helping the chasing teams plan their innings better. Thus, the team winning the toss should opt to bowl first here. So far, most of the matches have been won by the teams batting second in this T20 World Cup. Both teams have been priced at 1.90 to win the toss.

Place a bet on Betway and get a 100% welcome bonus of up to Rs. 2,500 if you bet on the toss outcome in Bangladesh vs England T20 World Cup.

As per bookies, England’s dependable opener Jos Buttler could be their best batsman in the game against Bangladesh. Jos Buttler opened the innings against West Indies and remained not-out while witnessing 4 wickets fall at the other end in a very small chase of 56 runs. He holds the key at the top for this English batting lineup. He has featured in 83 T20Is so far and has scored 1895 runs at an average of above 30 and with a strike rate close to 140. Jos Buttler is one of the finest white-ball batters from England, and he will be key in England winning the match against Bangladesh.

Place a bet on 1xbet by registering with the code 1BETINDIA1 and get a 130% bonus of up to Rs. 13,000 if you bet on Jos Buttler to be England’s top batsman in Bangladesh vs England T20 World Cup.