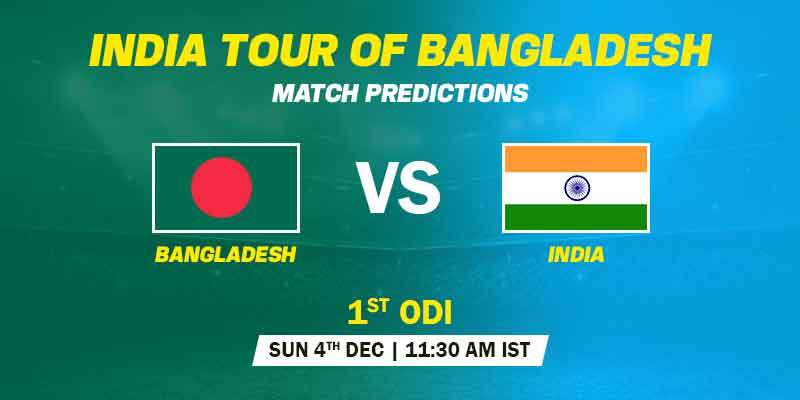 Cricket fans will witness Bangladesh vs India in their first ODI on Sunday where team India is touring the neighbors for a three-match ODI series.

Bangladesh will be playing their first series after exit from the T20 World Cup. Team India are coming after facing a disappointing end to the ODI series against New Zealand. Both teams have an unsaid rivalry in international cricket when it comes to the limited-over format.

Bangladesh are going through a major dip in its performance in international cricket in recent times. However, whenever it comes to any home series, they are one of the most dominating teams.

They have defeated teams like Australia on their home pitch and winning against India will be a huge boost to the overall team morale.

Team India, under the captaincy of Shikhar Dhawan, had a disappointing end to the ODI series against New Zealand. BCCI and the selection committee have now started preparing the team for the upcoming ODI world cup.

The seniors are coming back to the team from their rest since the T20 world cup. The team will witness a lot of selection dilemmas in the upcoming days.

Bangladesh has always come out as a tough team to beat at their home pitches. However, they received a big blow as their skipper Tamim Iqbal has been ruled from the series because of an injury and their pace bowler Taskin Ahmed will be missing out on the first ODI because of his back issues.

Mushfiqur Rahim or Shakib Al Hasan is likely to lead the team in his absence. All the eyes will be on Litton Das as he is one of the most dangerous batsmen on the team.

Team India’s senior players will be coming back to the ODI format after a long time. Skipper Rohit Sharma and Virat Kohli will be now focused on the ODI world cup and making sure that the whole team stays positive. The declining performance of KL Rahul and Rishab Pant has become a point of concern for the selection committee.

Shikhar Dhawan will be playing an important role as an opening batsman. In absence of Jasprit Bumrah, all the eyes will be on Mohammed Shami as the most experienced pacer on the team.

Team India has dominated the limited-over format against Bangladesh in recent times. Even though the hosts have the advantage of the home pitch, we expect India to score a comfortable win in the first ODI.

Senior players are making their comeback in the Indian team and that will be a major boost for the team. We expect the men in blue to win against Bangladesh in the first ODI. For some great odds create an account at bet365.