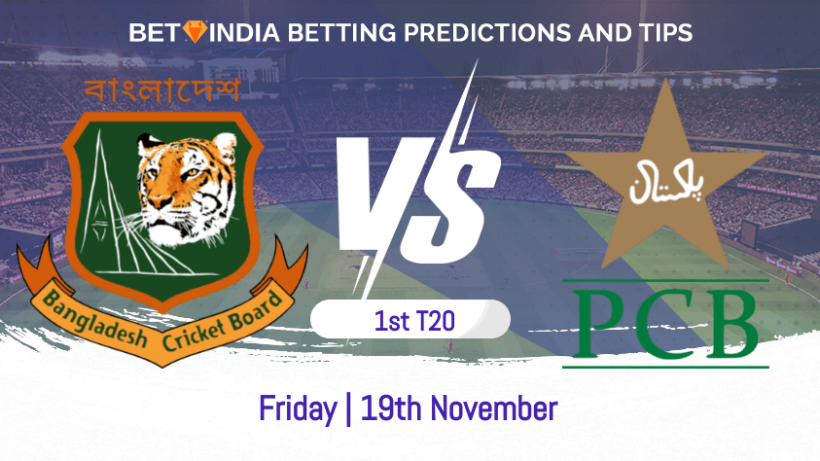 Two sides who experienced very different T20 World Cups meet this week for the start of a three-match T2o series. Pakistan, who played so well until the semi-final phase of the tournament, have more or less taken the same squad over to compete, while Bangladesh, after experiencing such a miserable tournament, will be ringing the changes.

On home soil, Bangladesh have already proved they can beat the very best, having defeated Australia and New Zealand in the last T20 series they have played at home. Despite Pakistan being the superior side, this should be a closely fought contest. The betting indicates that Pakistan are the heavy favourites, and they can be backed at 1.29. Bangladesh are priced at 3.75 to pull off the shock win.

Heading into the recent World Cup, Bangladesh were ranked 5th in the world and were many people's dark horses for the tournament. With the tournament taking place in conditions that would be primed to suit, Bangladesh's return of just two wins has to be considered a huge disappointment. Their tournament got off on the wrong foot with a surprise defeat to Scotland; managing to put that shock behind them, the Tigers then beat both Oman and PNG to qualify for the Super 12 phase. This was as good as it would get, with Bangladesh going on to lose every match in the Super 12 phase.

As a result of the poor display, this Bangladesh side will be very different from the team that got thumped last time out against Australia. Shakib Al Hasan is still feeling the effects of his hamstring injury that he picked up in the World Cup and, as a result, will miss the entire series, as will Mushfiqur Rahim, who has been giving his marching orders following some recent poor form. The trio of Soumya Sarkar, Liton Das, and Rubel Hossain have also been omitted from this series.

Bangladesh will have one eye on the future, and despite the Tigers missing a whole host of experience, it gives others a chance that they will be looking to take with both hands.

Ouch, it was all looking so good for Pakistan. Having created history by beating India for the first time in an ICC-hosted tournament, Pakistan then backed this stunning result up by sweeping through the Super 12 phase of the tournament unbeaten.

Entering the semi-final phase as the clear tournament favourites, Pakistan produced a slightly ragged display against Australia, where some of their bowling and fielding really let them down. Posting 176, it was a total that looked to be about 10 runs short, and so it proved to be, with Australia chasing the total down with an over to go.

Looking forward to the next World Cup with this experience under their belt, Babar Azam and his men will be considered one of the favourites. They will want to bounce back from their semi-final defeat and will view this as the perfect opportunity.

The venue was opened in 2006, and Bangladesh play a lot of their cricket here. In total, there have been 54 T20 games hosted at the venue, with the side which bats first winning 28 times and the side batting second winning on 26 occasions.

The smart money on this match has to be on Pakistan. They carry much better form into the clash, and it really feels that Bangladesh is rebuilding, which could be painful for their followers.

This Bangladesh side will be young and inexperienced at this level, with several of their more experienced players set to miss this series. On the one hand, the fearlessness of youth could play to their advantage, but on the other hand, if the match gets tight, there is every chance that this one could get away from them.

The two sides played against each other in this format back in 2020, with Pakistan winning on both occasions.

Mohammad Rizwan and Babar Azam both had great world cups finishing 1st and 3rd in overall runs scored. Azam's preparation for this contest has been interrupted with a false positive COVID test, but he has since returned a negative test and should be in line to play here.

Rizwan showed his class top-scoring for Pakistan in their defeat to Australia, and we think he can do so again in this contest.

It's hard to pick between the two openers, but Rizwan is one of the best T20 batsmen in all of the world and comes into this one in slightly better form; odds for him to be his side's top scorer at 3.25 could provide some brilliant value.

Place a bet on 1xbet by registering with the code 1BETINDIA1 and get a 130% bonus of up to Rs. 13,000 if you bet on Mohammad Rizwan to be Pakistan's top batsman in Bangladesh vs Pakistan 1st T20.