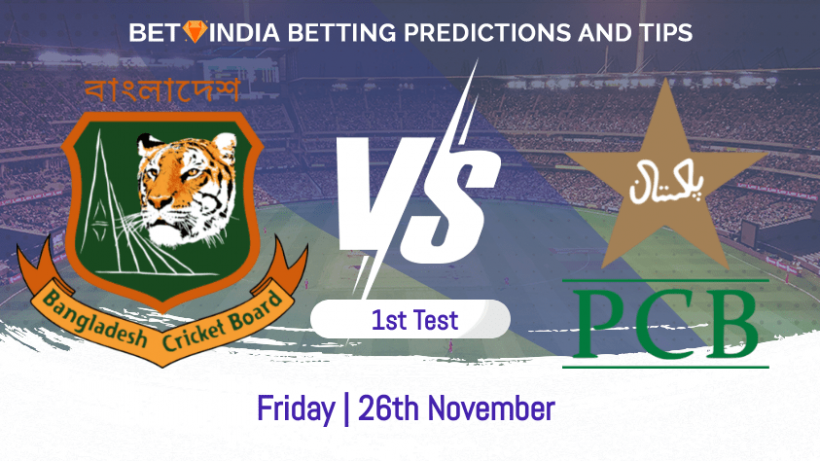 After dominating a three match T20 series, attentions between Bangladesh and Pakistan now turn towards a two match Test series.

This will be the 12th Test match that these sides would have competed in, Pakistan have won ten and drawn one of the previous 11. With the T20s now behind them, both sides will be looking to get their World Test Championship campaign off to the perfect start. Bangladesh, despite playing at home are the heavy underdogs and can be backed at 7.50. Pakistan are priced at 1.30.

Bangladesh have had a miserable T20 period only winning two matches against P.N.G and Oman in a run that spanned across the World Cup and a three match T20 series against Pakistan. With the T20s now firmly in the rear view mirror, there will be hope that a change to red ball cricket and the inclusion of a few new faces will provide a lift to the Bangladeshi side who are in desperate need of one.

Since earning full test status, Bangladesh have only won 15 tests out of a possible 124, however when they play at home they have a fairly decent record, winning 9 drawing 8 and losing 9. Similarly to when they play white ball cricket, at home they can be a tough nut to crack.

Bangladesh who have never beaten Pakistan in this format of the game will be looking to put that right when these sides meet in Chittagong. Top-order batter Mahmudul Hasan Joy and fast bowler Rejaur Rahman Raja have both earnt maiden call-ups to the side after remarkable performances in domestic cricket.

Bangladesh’s best player Shakib Al Hasan has also been included following his hamstring injury which he picked up at the World Cup however he is to be checked over before the Test begins.

Pakistan have gone from the one of the worlds most inconsistent sides, to a side that is now a winning machine. They enjoyed an exceptional T2o World Cup, reaching the semi finals but will have been so disappointed to have lost to Australia. However it’s clearly a loss they haven’t dwelt on as they have been in magnificent form in the three match T20 series prior to these Test matches, swatting away Bangladesh with the minimum of fuss.

Pakistan will want to complete the sweep and win the Test portion of this tour. They have been in great form in the red ball format of the game winning their last six test matches against South Africa, Zimbabwe and the West Indies and will want to build on that impressive record here.

A key reason behind their recent success has been the performances of bowler Shaheen Afridi who has taken 35 wickets across those recent test wins, no batting side has been able to get past 300 against this Pakistan attack in the last 12 innings.

The pitch at Zahur Ahmed Chowdhury Stadium is slow in nature. The new ball comes nicely onto the bat but the pitch tends to slow down as the game progresses, expect the spinners from both sides to play a major role.

Clear skies will greet both sides on Friday. The temperature in Chattogram is expected to range between 18 and 29 degrees Celsius. There will be a cloud cover over the next four days but nothing alarming.

It’s difficult to see any other result other than a win for Pakistan. Pakistan seem to have Bangladesh’s number across all formats of the game, and in games that are played in this part of the world, both Bangladesh and Pakistan have the same strengths but Pakistan’s are obviously stronger than their Bangladeshi counterparts.

The main difference between the sides has to be the batting lineups, with Pakistan’s being so much stronger than Bangladesh’s. Whereas Pakistan have wicket takers that can strike at any moment, Bangladesh don’t have this luxury. It will be very hard for Bangladesh to make major inroads into the Pakistan batting line up and for this reason Pakistan have to be considered heavy favourites.

Place a bet on Bet365 and get a welcome bonus of up to Rs. 4,000 if you bet on Pakistan to win in Bangladesh vs Pakistan 1st Test.

Place a bet on Betway and get a 100% welcome bonus of up to Rs. 2,500 if you bet on the toss outcome in Pakistan vs Bangladesh 1st Test.

In T20’s Babar Azam is a devastating batsman to have at the top of the order but in tests the Pakistan captain can come in at 4 and his impact can be spectacular. Regarded as one of the best batsman in the world, Azam had a great T20 World Cup. His form dropped off a little in the three subsequent T20 matches against Bangladesh but if the pitch is flat and the ball isn’t doing much Azam has the ability to score some serious runs. His odds of 3.00 to Pakistan’s top run scorer could be the smart play.

Place a bet on 1xbet by registering with the code 1BETINDIA1 and get a 130% bonus of up to Rs. 13,000 if you bet on Babar Azam to be Pakistan’s top batsman in Bangladesh vs Pakistan 1st Test.