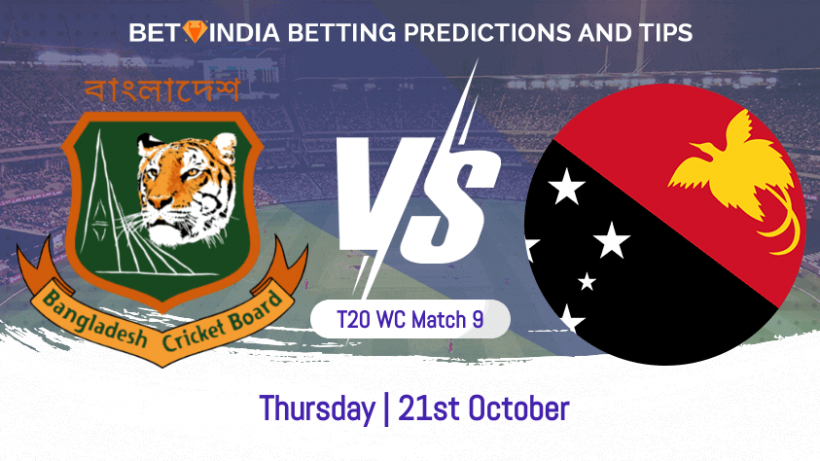 In what's been an opening week of the T20 World Cup containing numerous twists and turns, we have already arrived at Group B's final round 1 matches, with the first being Bangladesh vs PNG.

The Super 12 phase of the tournament is just around the corner, and soon we will know the 12 teams who will be battling it out for World Cup Glory. Group B is fascinatingly poised, with Scotland leading the way on four points thanks to two successive victories. Oman and Bangladesh are second and third with one win each, with PNG propping up the bottom of the table after two defeats.

Sitting at the third position in the table heading into their final round 1 fixture was not what Bangladesh had in mind at the start of the tournament, but the defeat to Scotland has led to the Tigers needing to win against PNG and win well. They are the heavy favourites here and can be backed at odds of 1.08.

Bangladesh did what they had to do in their game against Oman, but for a short period, it looked as if Oman would chase down Bangladesh's 1st innings total of 153. The bowling duo of Mustafizur Rahman and Shakib Al Hasan ensured the Bangladeshis would live to fight another day as they took 7 wickets between them.

In what looks like a one-sided match on paper, look for these two to wreak havoc on a pretty shaky PNG batting lineup. Both Rahman and Shakib are priced at 1.83 to take over 1.5 wickets each.

PNG, the tournament minnows, had an excellent bounce-back performance against Scotland; they showed what they could do despite falling short of the total that Scotland had set.

It was in the middle overs that the contest was lost for PNG; they had restricted Scotland to 26/2 after 3 overs but then couldn't make any further inroads until the Scots had reached 118. They still hung around well, taking six wickets in the final two overs, with Kebua Morea taking four wickets in the last over.

The batting from PNG looked hopeless in their first game outside of captain Assad Vala; however, the batsmen showed their talent in the second game as they were able to score runs throughout, with Norman Vanua top-scoring for the islanders with a score of 41.

Despite the two losses, this will be PNG's most challenging assignment. Already eliminated, the islanders are a massive 8.00 to cause the upset. Captain Assad Vala has led his side with a great deal of credit and class; he has also shown what a good player he is, averaging over 35 in his two innings so far. He is priced at 3.50 to be his side's top scorer.

In total, there have been 20 T20 matches held at the venue, with the team that chases winning 13 of the 20. There has only ever been one T20 century scored at the ground, and in a match where both teams will be under pressure, a bet on there being no century scored is priced at 11.00, which could be a good value bet.

Betting Predictions for Bangladesh vs PNG

Let's take a look at a few important betting predictions for Bangladesh vs PNG:

Bangladesh must be licking their lips at the prospect of facing PNG, who they should beat easily, and they will need to. Coming into this match occupying the third spot in the group, they will need to boost their run rate as it's currently worse than Oman's. If Oman wins against Scotland and Bangladesh beats PNG, the standings for the two qualifying spots will come down to the net run rate.

If Oman lose to the Scots, a Bangladesh win would be enough for them to qualify for the Super 12 phase.

It's hard to make a case for PNG to win this game as they are just the inferior side across all three phases of the game. Tony Ura only has one setting when he bats, and that is to smack it. If Ura can find the middle of the bat, he could put some pressure on Bangladesh, but so far, he hasn't looked convincing in this tournament.

If PNG win this match, it would be the biggest shock, perhaps, in all cricketing history. It is to be seen whether the drama will go down to the wire, but Bangladesh shouldn't have any problems in winning this one.

Either team to win the toss can be backed at 1.91. On a pitch that should offer something to both batsmen and bowlers, the team that wins the toss will be looking to chase as the ground seems to favour the chasing team heavily. For the team that bats first, the average score in the first innings is 149, so anything around this number will be tough to chase, as demonstrated by Oman's failure to chase down Bangladesh's total of 153 in their last game.

Shakib Al Hasan has proved his class in this tournament, taking wickets and being his side's top scorer over the two games. You could make the argument that Shakib could get into any side in the world and his two wickets against Scotland saw him become the all-time leading wicket-taker in T20 International cricket.

Shakib will be hoping that those above him in the order will score the bulk of the runs, but if he is required, he has the skills to score quickly and is priced at 4.33 to be his side's top scorer.

Place a bet on 1xbet by registering with the code 1BETINDIA1 and get a 130% bonus of up to Rs. 13,000 if you bet on Shakib Al Hasan to be Bangladesh's top batsman in Bangladesh vs PNG T20 World Cup.