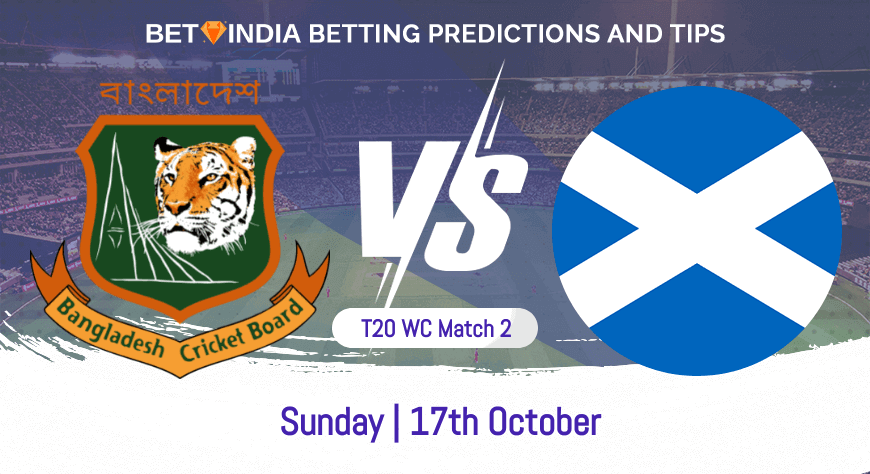 The second match of this year's T20 World Cup, ‘Bangladesh vs Scotland', sees one of the world's established cricketing nations, Bangladesh, take on Scotland, who are currently ranked 14th in the world, and qualified for the World Cup in the qualifiers held back in 2019.

Bangladesh were unlucky, ranked too low in December 2018 to have qualified for the Super 12 stage; they were instead designated to the group stage of the tournament. Today, Bangladesh is ranked 6th in the world and have just come off a 4-1 series demolition of Australia and series win against New Zealand.

Bangladesh are heavy favourites from Group B to qualify for the Super 12 phase; however, against Scotland, they come up against a side with talented players who will be doing all they can to provide the tournament with an early shock.

This will be Bangladesh's sixth successive T20 World Cup, but they have never progressed past the Super 12/Super 8 phase, even when they co-hosted the tournament back in 2016.

Despite their recent improvements, Bangladesh is still a side that many consider outsiders, and this is reflected by their pre-tournament odds, where the Tigers can be backed at a massive 41.00. On their day, Bangladesh can beat any side in the world.

Bangladesh have an array of talent in their side, and the conditions in the U.A.E. should suit them down to the ground. In Shakib Al Hasan, Bangladesh have one of the game's finest all-rounders. Shakib has scored 1,763 runs and taken 106 wickets at 6.73 runs per over in his T20I career. He is one of the key men for Bangladesh, and he is priced at 4.00 to be his team's top scorer and 1.73 to score over 43.5 match runs, both of which are likely to happen.

Shakib is ably supported by Mustafizur Rahman. Rahman has developed into a fine T20 bowler and is currently operating with a decent economy rate of just over 7 an over. He has 76 T20 wickets across 58 matches to date in his career. On slow, skiddy pitches, it could play perfectly into Rahman's hands, and odds of 2.00 to take over 1.5 wickets look appealing.

Scotland are here by virtue of qualifying as the 5th qualifier from the qualifiers. Scotland had a mixed time of it in the qualifiers, losing to minnows Singapore before being able to win four of their final six to sneak through. This will be Scotland's fourth T20 World Cup after playing in 2007, 2009, and 2016 tournaments. They have never progressed out of the group stages.

Scotland contain a blend of youth and experience. Led by captain Kyle Coetzer, Scotland have proven they can compete and beat the very best, as demonstrated by their defeat of England a few years ago.

Coetzer himself led the charge finely that day and is priced at 4.00 here to be Scotland's top scorer in this match. Coetzer is supported by George Munsey, who also has good credentials with the bat. Munsey played a huge part in Scotland qualifying for this World Cup, as he averaged the best across the entire qualifying phase. Munsey can also be backed at 4.00 to be his side's top scorer.

Betting Predictions for Bangladesh vs Scotland

Now let's take a look at a few important betting predictions for Bangladesh vs Scotland:

Similar to the Oman vs P.N.G. game, there is very little value to be had in predicting a Bangladesh victory, but it's the most likely outcome.

Bangladesh will want to come through this group stage unscathed and fresh for the Super 12 phase. However, in this format, they can't afford to be complacent as over twenty overs, anything can happen.

One element that could act as a leveller and give the Scottish side hope will be the pitch. As we have just seen in the IPL, the pitches can be tricky to bat on, and batting sides can often struggle to get into any rhythm. There will be low totals across the tournament, and if Scotland can bowl well and restrict Bangladesh to 130 or 140, they will have a chance.

Place a bet on Bet365 and get a welcome bonus of up to Rs. 4,000 if you bet on Bangladesh to win in Bangladesh vs Scotland T20 World Cup.

Either team to win the toss can be backed at 1.91. On a pitch that should offer something to both batsmen and bowlers, the team that wins the toss will be looking to chase as the ground seems to favour the chasing team heavily. For the team that bats first, the average score in the first innings is 149, so anything over this will be tough to chase.

Place a bet on Betway and get a 100% welcome bonus of up to Rs. 2,500 if you bet on the toss outcome in Bangladesh vs Scotland T20 World Cup.

Bangladesh are a pretty complete team, but one area where they struggle is through their power-hitting and finding the boundary regularly enough to beat the bigger sides. Soumya Sarkar can be a difference-maker and can provide the explosive spark when Bangladesh needs him. In a match where value is hard to find, betting on Sarkar to be his team's top scorer could be the best way to bet.

Place a bet on 1xbet by registering with the code 1BETINDIA1 and get a 130% bonus of up to Rs. 13,000 if you bet on Soumya Sarkar to be Bangladesh's top batsman in Bangladesh vs Scotland T20 World Cup.