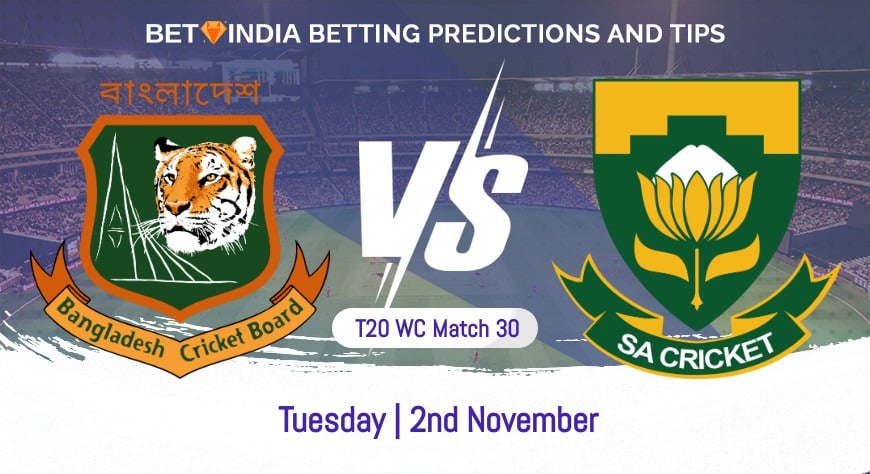 We are now in the thick of Super 12 action, and next up is a huge clash for South Africa – Bangladesh vs South Africa.

After three defeats from three games, Bangladesh are out of contention for qualifying, but South Africa, after two wins and a defeat, are still in contention for a semi-final place. A win here for South Africa will put pressure on Australia, who they are most likely battling out with for the second place in the group.

Considering South Africa head into this match in much better form than their opponents, they can be backed at 1.30 for the win. Bangladesh, to get a first win of the Super 12 phase, are priced at 3.50.

In front of vociferous home support in Sharjah, Bangladesh lost a thriller to the West Indies, falling just three runs short of the 142 that the West Indies had set in the first innings.

It was a game that Bangladesh would be kicking themselves over losing. Some fantastic bowling from Mustafizur Rahman and Mehedi Hasan restricted the West Indies to 32/3, but some big hitting from Nic Pooran and Jason Holder saw the West Indies post 142.

Bangladesh looked in control of their chase but lost some key wickets at key times, which checked their momentum. Heading into the final over, the Tigers needed just 13 runs to win but could only hit 9. It was a gut-wrenching defeat that officially eliminated Bangladesh from qualifying for the semi-finals of the tournament. To compound matters, star all-rounder Shakib Al Hasan has been ruled out the rest of the tournament after picking up a hamstring injury.

With Shakib out of the lineup, much of the pressure lies on Mustafizur Rahman to take the wickets, and he is priced at 3.25 to be his team's leading wicket-taker.

After an opening Super 12 defeat to Australia, South Africa bounced back nicely with two consecutive wins against the West Indies and Sri Lanka. The two victories put the Proteas in the hunt for the semi-finals and level with Australia. Both are two points behind England, who are undefeated. A win for South Africa will put pressure on the Aussies ahead of their game against Bangladesh.

Following the off-field drama regarding Quinton de Kock, South Africa have to be delighted with the fighting qualities they showed in their victory over Sri Lanka.

They bowled really well against Sri Lanka as a bowling unit, restricting them to 142, with only Prabath Nissanka proving hard to remove. They struggled with the bat, but Temba Bavuma and David Miller proved to be the stars scoring 46 and 23. It was Miller who brought home the victory, scoring consecutive sixes to secure a dramatic win with just one ball remaining.

Miller is a deadly power hitter, and he could really tuck into this Bangladeshi bowling lineup. Odds of 7.00 to be his team's top scorer could be a great way to play.

Let's take a look at a few important betting predictions for Bangladesh vs South Africa:

Although South Africa are rightly the heavy favourites for this match, the results don't really do Bangladesh justice. The Tigers have lost all three of their opening matches, but the defeats against Sri Lanka and South Africa are matches that easily could have gone the other way, so this won't be a one-sided contest by any means.

It remains to be seen how much impact the loss of Shakib will end up having for Bangladesh. Make no mistake, Shakib is Bangladesh's talisman with both the bat and ball, and he is irreplaceable. However, this Bangladesh side has shown they will fight to the end. They will have some fanatical support behind them, and they will be hoping this could soften the impact of earlier losses.

South Africa need to keep things professional. South Africa aren't immune to the odd, shocking performance, and they must avoid one here. South Africa have looked really in control of their game in their previous two wins, and they have a tonne of experience. They will be hoping this experience will get them through.

Place a bet on Bet365 and get a welcome bonus of up to Rs. 4,000 if you bet on South Africa to win in Bangladesh vs South Africa T20 World Cup.

Either team to win the toss can be backed at 1.91. On a pitch that could be hard to bat on, the side that wins the toss may want to put the other team in, as the chasing team has won every match so far held at this venue in the World Cup. Any score over 150 should be very hard to chase.

Place a bet on Betway and get a 100% welcome bonus of up to Rs. 2,500 if you bet on the toss outcome in Bangladesh vs West Indies T20 World Cup.

It's been a tough World Cup for Quinton de Kock, who has been embroiled in some off-field issues, which caused him to miss their victory against the West Indies. With that now behind him, de Kock is looking to make up for the lost time, and we are going to back him to be his team's top scorer in this one.

De Kock is at home in these conditions and is a great player of spin. With no Shakib in the lineup, look for de Kock to set his team up for a big score and take the attack to this Bangladeshi bowling unit.

Place a bet on 1xbet by registering with the code 1BETINDIA1 and get a 130% bonus of up to Rs. 13,000 if you bet on Quinton de Kock to be South Africa's top batsman in Bangladesh vs South Africa T20 World Cup.