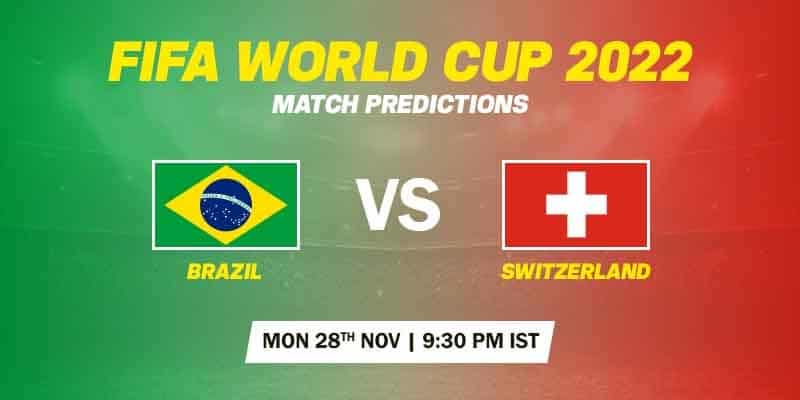 The second-round matches in Group G of the FIFA World Cup 2022 are upon us with Brazil vs Switzerland match scheduled to take place on Monday. Brazil won their first match against Serbia 2-0 while Switzerland got better off Cameroon 1-0 on Thursday.

Brazil laboured in the opening period as Serbia stifled their inventiveness. Richarlison then took over and scored one of the finest goals at Qatar World Cup 2022 until now. Meanwhile, the Swiss also had to be patient in their 1-0 win against Cameroon earlier in the day.

Both teams have three points under their belt after the first game and a win here for any of them will surely send them to the knockout stages. Brazil are World's No.1 team in the FIFA rankings and will be favourites to continue their winning run against a tricky Switzerland side.

On Monday, Brazil takes on a disciplined Switzerland team hoping to make a statement during the World Cup group stage. There will be no justifications for anything less than three points for the Selecao with one game remaining in the competition. However, there are question marks over their star attacker Neymar. Neymar injured his ankle during Brazil's win against Serbia and the injury looked pretty bad. However, Tite’s side goes into the match as favourites and boasts a squad with no shortage of quality despite Neymar's injury. Thiago Silva's expertise, combined with that of ex-PSG teammate Marquinos and Casemiro in front, creates the ideal foundation for Brazil's attacking play.

Murat Yakin's club will probably start the game by defending. Brazil is likely to be frustrated by a strong defence and a competitive midfield. Yann Sommer was on top of his game against Cameroon and made some solid saves. So most probably Swiss are likely to be going to the match with the same starting XI.

On Monday, the World Cup favourites take the field for their second match of the tournament, and these Brazil vs. Switzerland predictions point to another victory for the Selecao. Brazil are too strong of a team to get toppled by Switzerland.

Our experts think Brazil vs Switzerland will be going to be a 3-1 win for Brazilians. For more odds visit 1Win.