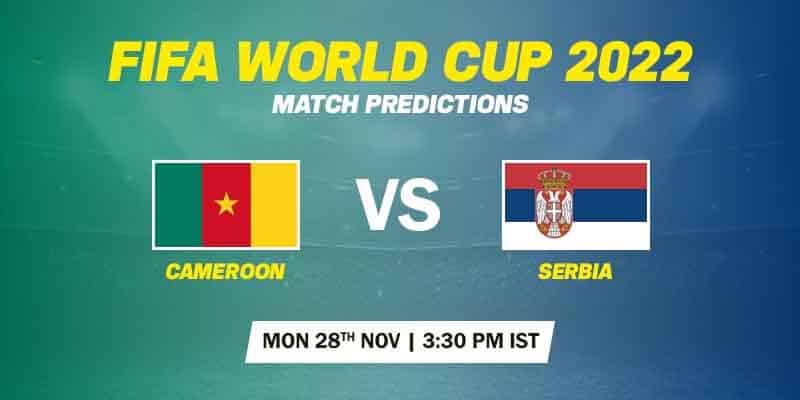 Serbia have found itself in a group of two of the most ferocious teams. Brazil and Cameroon, both are well-known in the world of international football. It won’t be an easy task for Serbia to qualify for the next round as they have to face Cameroon next and after that, they are scheduled to face the team that defeated Cameroon in their first game, Switzerland.

Cameroon witnessed an upset in their first game itself as Switzerland overpowered the African team by 1-0. Les Lions Indomptables is currently placed at the third position in Group G and to qualify for the next round, a win against Serbia is important.

Cameroon has witnessed some glory days in the past with some of the best players in the world. Roger Mila and Samuel Eto’o are the best examples of the same. In their last game against Switzerland, the Lions found themselves in a very awkward situation where the opposition scored a goal as soon as the second half began. The game was in under the control of Cameroon but they were punished for their mistake in the 48th minute. It will be interesting to see how they will be able to make a comeback against Serbia.

It is not easy to face a football giant in the first game of the World Cup and Serbia went through the same feeling on Friday as they faced Brazil. Serbia was outcasted by Brazil with a scoreline of 2-0. However, Serbia’s perseverance to score goals should be admired and because Brazil has some world-class players, Serbia defended the game very well. Cameroon vs Serbia won’t be an easy fight for Serbia but they should display some aggression to maintain the defence line strongly.
Cameroon vs Serbia Match Prediction

Cameroon vs Serbia will be a tough battle of defence. Both the teams have a strong defence and that will be a key to winning the game. Cameroon has a weak attack and Serbia might benefit from the same. We predict Serbia winning the fixture by 1-2.

Our experts feel that Cameroon vs Serbia will end up with Serbia scoring two goals and Cameroon scoring one goal. For some great odds create an account at bet365.