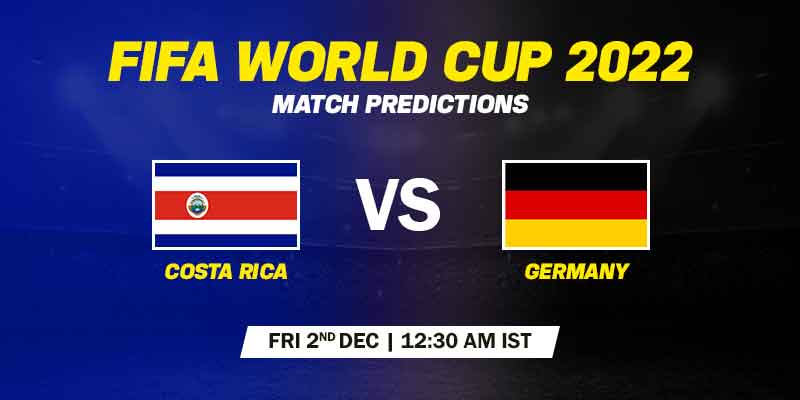 In this Costa Rica vs Germany encounter in the final Group E match of the ongoing FIFA World Cup 2022, Hansi Flick's side appears to still have a chance of winning against one of the lowest-ranked nations and advancing to the next stage. However, they will also need help from Spain to get a positive result against Japan in their tie.

After being annihilated 7-0 by Spain, the CONCACAF side will be confident after they beat Japan. Although, they could face a tough night against the 2014 World Cup champions. Germany will have to be on top of their game as well if they want to make it to the knockout stage of the Qatar World Cup 2022.

Germany will be hoping to start quickly in order to avoid any doubts and ease past Costa Rica. In the previous match between the two nations, played in 2006, Costa Rica were able to defeat Germany by a score of 2-0. However, two defensive lapses are unlikely given the degree of concentration Germany will probably bring to the game on Thursday.

Prior to the encounter against Germany, head coach Luis Fernando Suarez is not anticipated to make any dramatic adjustments. To provide a stronger defensive option, Kendall Watson is most likely given the right-back starting position. Despite his old age, Bryan Ruiz might start on the right wing.

Despite his team's underwhelming performance, Hansi Flick will not panic. The likes of Jamal Musiala and Leon Goretzka have both shown themselves worthy of starting. Niclas Füllkrug may get the nod after scoring against Spain due to Kai Havertz's poor performance in the tournament so far.

On Thursday, the German team's manager will be eager to boost his players' spirits. We predict a victory for Germany at the Al Bayt Stadium, which is fortunate for the manager because Costa Rica are probably the best opponents against which to accomplish so.

We predict a 2-0 victory for Germany in Costa Rica vs Germany tie. For all the betting odds simply create an account with bet365 and get things started.

Place your bets on bet365