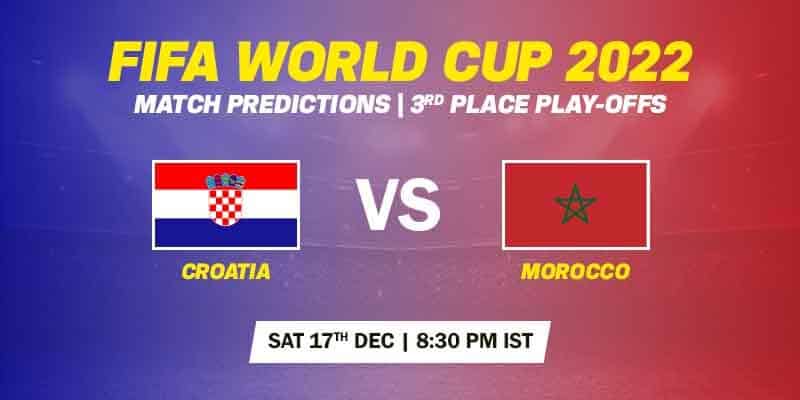 It is now a team for Croatia vs Morocco, two teams from the same group will meet again to make their place for the third position in the ongoing FIFA World Cup 2022.

Croatia are coming after facing a defeat by 3-0 against Argentina and Morocco witnessed a defeat against France by 2-0. Both teams will be fighting for third place in the tournament and they both have similar styles of play.

The 2018 runner-up Croatia made it to the semi-final for the second consecutive time but unfortunately, couldn't see themselves in the final game. The Checkered Ones lost to Argentina by 3-0 and it was a very disappointing defeat for Luka Modric and his men.

The team’s confidence was high after defeating Brazil in the quarter-final but their journey unexpectedly came to an end.

Morocco had the best outing in the FIFA World Cup 2022 and their campaign will go down in the history books. The Atlas Lions made history by becoming the first African team to qualify for the semi-final stage.

It is not the everyday moment for Morocco and when they leave for their home, Morocco will have a sweat memory from the FIFA World Cup 2022.

Croatia cornered every major team with their only strength i,e, their defence skills. With every game, it got tough for the opposition to score a goal against Croatia. However, one segment that Croatia majorly lacked was their attacking ability.

The Checkered Ones didn't have an aggressive attacking partnership and they failed to score goals. They won the round of 16 and the quarter-final through penalties and luck played its part.

Morocco's squad will be high in spirits as they have seen the best outcome in their history of football. They not only became the first African country to qualify for the semi-final but also defeated teams like Spain, Belgium, Japan and Portugal.

The Atlas Lions have the same problem as Croatia as they are also good with defence but lacking in scoring goals. It will be interesting to see both teams who are equally matched to fight for the third position.

We predict that after multiple tries, Croatia will secure the third position by winning the game at a 1-0 scoreline.

Our expert analysis says that Croatia will win the game by a 1-0 scoreline and defeat Morocco on Saturday. For some great odds create an account at 1XBET.