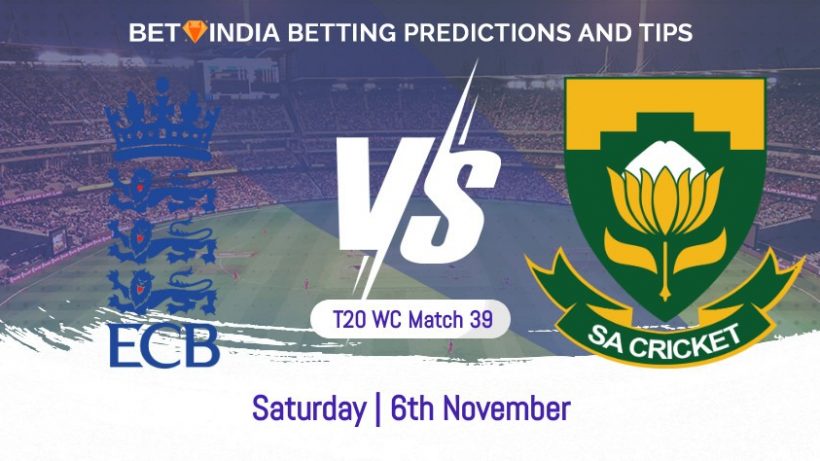 Two of the form sides in this World Cup meet as England take on South Africa. The English amazingly still haven't officially qualified for the semi-final phase despite winning their opening four games. A win for Eoin Morgan's men will see them qualify as group winners. A heavy defeat against South Africa and an Australian win over the West Indies would bring qualification down to the net run rate.

After a loss to Australia in their first group game, South Africa have now won three in a row and have taken qualification right down to the final day. An inferior net run rate has seen the South Africans drop down to third in the group, and even with a win, it might not be enough to overtake the Australian and English sides.

In what is a finely poised group, England to go unbeaten are priced at 1.44, and the South Africans can be backed at 2.75.

After a busy period of three matches in a little over a week, England have been able to rest up ahead of this final match and what they hope the semi and final.

England have so far been superior and would have appreciated the challenge that the Sri Lankans gave them on a spinny Sharjah deck last time around.

Jos Buttler has been one of the leading batsmen at this World Cup, and it was his effort when scoring a fine 101 off just 67 balls that got England into a commanding position.

Sri Lanka, in their chase, certainly kept things interesting, but it was the bowling of spin duo Adil Rashid and Moeen Ali who kept a lid on things, and their two wickets apiece saw England win by 26 runs.

Buttler has been England's top scorer in three of their four opening matches, and he is priced at 3.00 to repeat the feat.

South Africa have kept their qualification hopes alive thanks to some battling displays. The South Africans have won three in a row and know that a win here could be enough to see them through.

The South Africans showed they were a class apart from Bangladesh, who they beat convincingly in their last match, winning by 6 wickets and chasing down the Bangladesh total of 84 with over 6 overs to go.

The match was won by the South African pacemen, with Kagiso Rabada and Anrich Nortje taking three wickets each. Rabada has a liking for taking English wickets, and priced at 4.00 to be his side's leading wicket-taker, could be a good bet.

This match will be held in Sharjah.

Let's take a look at a few important betting predictions for England vs South Africa:

England are the rightful favourites for this match, and they, along with Pakistan, have looked like the two standout teams of the whole tournament.

South Africa certainly have the ability to cause an upset, and it should be a fantastic spectacle. It would be dangerous to dismiss South Africa, who have an array of talent at their disposal, but we will side with England to make it a perfect clean sweep.

We have already indicated how destructive Joss Buttler can be at the top of the order, but a batsman who showed some signs of recovery in the victory over Sri Lanka was Eoin Morgan.

Morgan had a torrid time in the IPL, but his captaincy can never be questioned. He seemed to turn a corner against Sri Lanka, and his 40 off 36 balls was timely indeed. He could be a value play at 8.00.

Place a bet on 1xbet by registering with the code 1BETINDIA1 and get a 130% bonus of up to Rs. 13,000 if you bet on Eoin Morgan to be England's top batsman in England vs South Africa T20 World Cup.