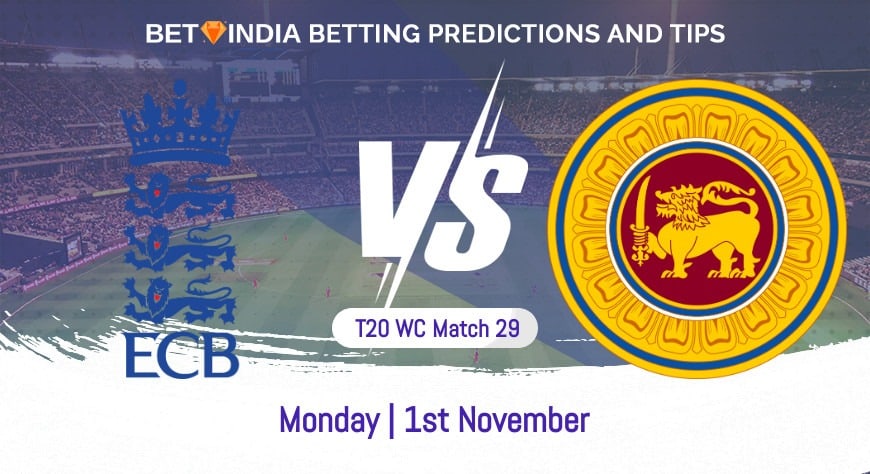 England outlined their title credentials with the most dominant display of this World Cup, beating Australia by eight wickets in crushing fashion.

Sri Lanka lost an absolute heartbreaker to South Africa after looking in a strong position to win. South Africa managed to score 18 off their final over to surpass Sri Lanka's total of 142 with just one ball to spare. After this loss, Sri Lanka's qualification hopes are now hanging by a thread.

England are now the clear outright favourites for the entire tournament and are heavy favourites to win this match too, and are priced at 1.20. Sri Lanka to pull off the upset can be backed at odds of 4.50.

England and Pakistan look like the two form teams of the tournament, and England would be a tough side to beat in this match following their demolishing of a previously unbeaten Australian side.

Like their two previous matches, England had the opportunity to bowl first, and their bowlers did a fantastic job by taking early wickets and restricting the Aussies to a low total.

Early wickets for Chris Jordan, Adil Rashid, and Chris Woakes restricted Australia to 21/4. Needing to recover, the Australians were able to steady the ship and reach a total of 125.

Needing to avoid early wickets, England's batsmen came out firing and looked to put the chase to bed early. Joss Buttler showed why he is such a respected batsman in this format, scoring 71 off just 32 balls, which included five 6s. England lost two wickets but reached the Aussie total with over eight overs remaining.

Barring a disaster, England have all but qualified for the semi-finals, but a win here will make them the first team to officially qualify and seal the top spot in the group. Look for Buttler to continue where he left off and dominate the Sri Lankan bowlers. He can be backed at 3.25 to be England's top scorer.

After a great start to the Super 12 phase with victory over Bangladesh, two successive defeats to Australia and South Africa have left Sri Lanka's hopes for qualifying for the semi-finals hanging by a thread. Sri Lanka will need to beat both England and the West Indies to stand any chance of progression, and even then, it might not be enough.

For much of their match against South Africa, the Sri Lankans looked in control. On a slow Sharjah pitch, a total of 142 was more than competitive. Opener Prabath Nissanka produced a masterful innings for the Sri Lankans, scoring 72 off just 58 balls.

With the ball, the slow conditions and some excellent bowling kept the South African chase in check, and thanks to the mastery of Wanindu Hasaranga, it looked like Sri Lanka would pull off a memorable victory. However, the match turned on its head in the final over as David Miller hit successive sixes to reach the Sri Lankan total with just a ball to spare.

Spin has been key for Sri Lanka, and England have looked largely untroubled by it in this World Cup. Spin bowlers Hasaranga and Chameera will hold the key, and they are priced at 2.25 and 2.63 to take over 1.5 match wickets each, respectively.

This match will be held in Sharjah. Sri Lanka have played three times at Sharjah and have won twice, whereas this will be the first match at the venue for England.

Let's take a look at a few important betting predictions for England vs Sri Lanka:

England are the rightful favourites for this match, and they, along with Pakistan, have looked like the two standout teams of the whole tournament.

England are yet to be thoroughly tested, and remarkably, when chasing, have not been taken past 14 overs in their three matches so far.

Wickets taken by spin far outweigh the wickets taken by the seamers in this World Cup, and England haven't yet faced a side capable of spinning the ball as well as Sri Lanka do.

Another worry for England is that the tail and the middle-order have had either no or very few minutes out in the middle because of the performances of England's openers. If Sri Lanka can claim some early wickets, they will be able to bowl at players with very little experience of batting in these conditions so far in this World Cup.

It's also worth remembering that the last time these sides met in a World Cup, Sri Lanka emerged as victors, beating England in the 50 over World Cup in their own conditions.

If England can play their best, they will win this match, but this Sri Lankan side has a lot of fight and heart, and it would be foolish to think this could be a one-sided contest.

Jason Roy and Joss Buttler have both looked imperious in this World Cup and, because of their great form, haven't given many chances to the rest of the batters. They rightfully dominate the betting to be their team's top scorer; however, in a match where value looks hard to find, it could be worth siding with Dawid Malan to be England's top scorer.

Malan will bat at three and can quite easily play the anchor role. He is capable against spin and can be an efficient scorer. At odds of 5.00, he could provide some real value as England's top scorer.

Place a bet on 1xbet by registering with the code 1BETINDIA1 and get a 130% bonus of up to Rs. 13,000 if you bet on Dawid Malan to be England's top batsman in England vs Sri Lanka T20 World Cup.