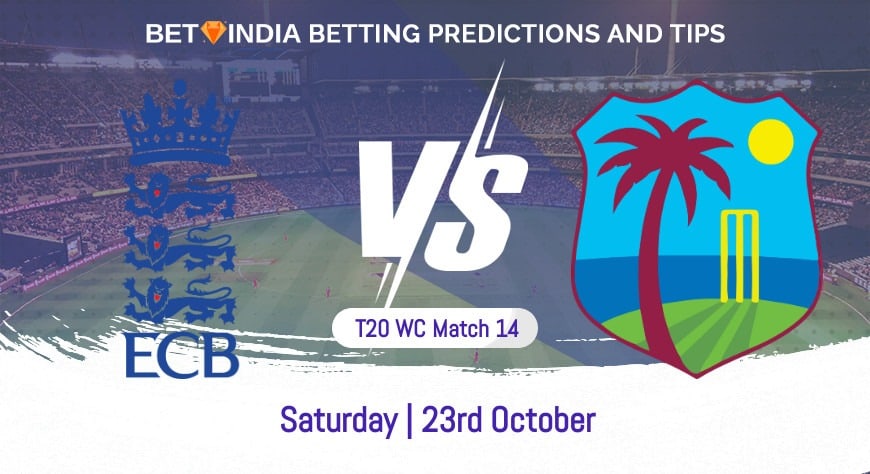 It's fitting that the headline match of the first day of the Super 12s gives us a repeat of the 2016 T20 World Cup Final with England vs West Indies.

The final of 2016 will always be remembered for Carlos Brathwaite smashing four consecutive 6s to win the title in magnificent fashion and, in doing so, breaking English hearts along the way.

Fast forward to the present day, and it's England who have the chance to create history, becoming the first side to win both the 50 Over World Cup and T20 World Cup at the same time.

Ahead of the Super 12 phase, England are the second-favourites for the tournament at 5.00, and the West Indies are amongst a host of teams priced at 8.00.

England enter this tournament as a bit of an unknown factor, which is a strange thing to say considering they are the current 50 over world champions. However, injuries to Ben Stokes and Jofra Archer leave this England side with a few question marks to answer.

The one thing this England side has perhaps over all of their rivals is power, and throughout the batting lineup, they have players capable of scoring big, quick runs. One thing England like to do is move Joss Buttler up to the top of the order, which makes sense as he can be England's most destructive player. At odds of 3.50, he is a safe bet to be England's top-scoring batsman.

Another danger that lurks in this English side is Adil Rashid. Rashid is one of the finest white ball spin bowlers and should have conditions he loves – odds of 3.75 to be England's top bowler is a great looking bet.

The West Indies have a tough ask on paper to defend their title, but as most West Indian sides in recent times, they have the talent and the players to go far. It's just whether they have the consistency to perform match after match.

The West Indies has a terrific blend of experience and youth on their side, with veterans Chris Gayle and Dwayne Bravo there to provide experience. Coupled with younger talents such as Obed McCoy, they can cause England some real problems.

The powers of Chris Gayle might be waning, but in Evin Lewis, they have another star batsman. Lewis had a fine CPL campaign scoring the second-highest amount of runs in the entire competition, averaging 47 over the duration of the tournament. It isn't a surprise to see Lewis near the top of the betting to be his team's top performer, and he is priced at 3.50 to be the West Indies' top run-scorer.

Let's take a look at a few important betting predictions for England vs West Indies:

This is a tough one to call. England are the favourites at 1.67, with the West Indies, the slight underdogs at 2.20.

When these two nations last played T20 fixtures against one another, England won the five-match series 4-1. There is no question that England have been the world's best white-ball side over the last 4-5 years, and to win the T20 World Cup would be a crowning achievement.

England are brilliantly led by Eoin Morgan, who is one of the best white-ball captains in the game. His own form has been questionable off late, but his captaincy has been brilliant, which is demonstrated by him leading the Kolkata Knight Riders to the final of the IPL.

West Indies love to play the spoiler, and they will be determined to win this match to get the defence of their 2016 title off to the best possible start. The smart money is on England, and that is who we will pick here to earn what is bound to be a narrow win.

Either team to win the toss can be backed at 1.91. On a pitch that could be hard to bat on, the side that wins the toss will want to bat to make the most of the batting conditions before scoring gets harder as the game goes on. Any score over 150 should be very hard to chase.

We have already highlighted the power of Joss Buttler and what he can do, but a man who gets strangely overlooked for all of his skills is Jason Roy. Jason Roy, when in form, is one of the finest T20 batsmen in the world and can find the boundary with regular frequency.

Roy has the ability to take the game away from his opponents in the opening few overs, and he has done this on many occasions. Priced at 4.33 to be his team's top scorer, he could be one of the best value plays in this contest.

Place a bet on 1xbet by registering with the code 1BETINDIA1 and get a 130% bonus of up to Rs. 13,000 if you bet on Jason Roy to be England's top batsman in England vs West Indies T20 World Cup.