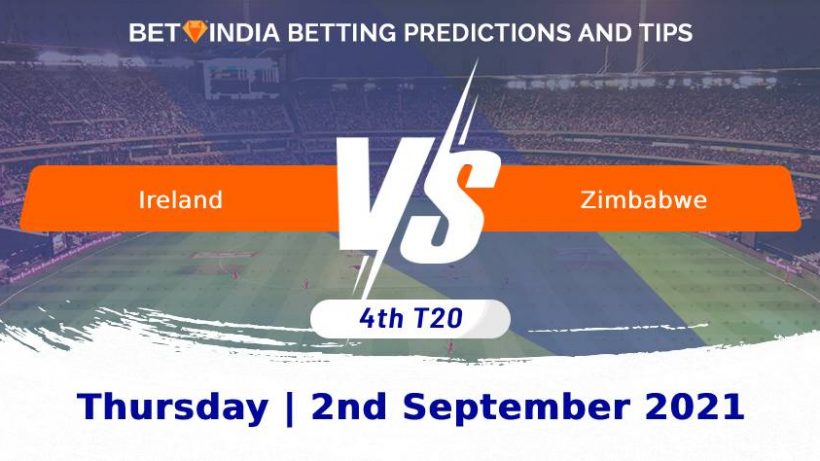 Thursday 2nd September sees Ireland and Zimbabwe meet for the fourth of five T20 Internationals, with the home side holding a narrow 2-1 lead. The fourth match will take place at Bready Cricket Club in Northern Ireland.

Ireland have won the last two matches of the series, recovering after losing the first game to lead 2-1 going into the fourth match. With the opportunity to win the series, Ireland will be looking to secure the victory and continue their momentum into the one-day internationals and the 2021 World Cup Preliminaries.

Zimbabwe have now lost two straight games and need to win this match to keep the series alive. Struggling to handle the conditions, Zimbabwe have struggled with both bat and ball and will need to find a way of scoring runs to win this game.

The weather on Thursday is set to remain dry. The temperature will be cool, and it will be cloudy for most of the day, so expect a fast pitch that could really aid the fast bowlers.

Ireland was dominant in the third match of the series, winning comfortably thanks to a maiden T20 ton from opener Paul Stirling. Stirling scored a devastating 115 off just 75 balls, and the knock included 8 fours and 8 sixes. Zimbabwe's chase never really got going, thanks mainly to the bowling of Mark Adaire, who picked up three wickets. With the Irish sensing blood and a chance to clinch the T2o series with one match to go, the favourites for the match have to be Ireland.

Place a bet on Ireland to win at Bet365.

Craig Irvine to score under 23.5 runs.

Despite being on the losing side, captain Craig Irvine put in a captain's knock, managing to top score for the visitors with a score of 33. Despite scoring 33, Irvine has struggled a little with the bat, managing scores of 17 and 15 in the other two games. Bet365 are offering odds of 1.83 for Irvine to score under 23.5 runs, and despite his match 3 heroics, this could be a good way to bet.

Place a bet on Craig Irvine to score under 23.5 runs.

Ireland to score the most sixes

In the third match of the series, Ireland outscored Zimbabwe by 8 sixes to 3. The Irish have outscored the visitors in every match of the series so far when it comes to the total number of sixes. Despite this stat, the odds of the Irish hitting the most sixes are reasonably generous. The Irish can be backed at 1.70 to hit the most sixes in match four.

Ireland to score the most sixes: Yes (1.70 from Dafabet)

Place a bet on Ireland to score the most sixes.

Ryan Burl has had a good T2o series with the ball – taking five wickets across the 3 matches completed so far. Despite his performance, Burl finds himself fairly low in the betting picks to be Zimbabwe's top bowler. Burl is set at 4.33 to be the leading wicket-taker for Zimbabwe, and that could be a good way to bet.

Ryan Burl to be Zimbabwe's top wicket-taker: Yes (4.33 from Betway)

Place a bet on Ryan Burl to be Zimbabwe's leading wicket-taker in match 4 of the T20 series.