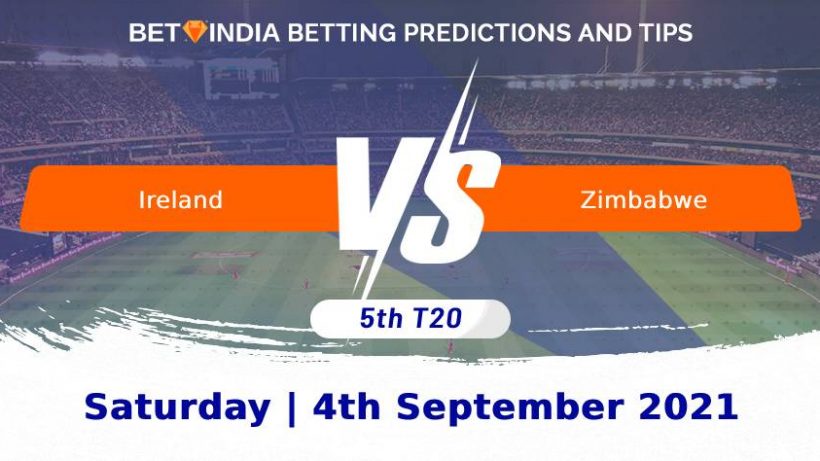 Saturday, 5th September, sees the culmination of the five-match T20 series between Ireland and Zimbabwe. The Irish have an unassailable 3-1 lead going into the final match of the series and will be looking to finish with a flourish. The fifth and final match will take place at Bready Cricket Club in Northern Ireland.

Despite a poor result in the opening fixture, Ireland were able to find the winning touch, winning the 2nd, 3rd, and 4th matches convincingly. The 4th match in the series was a rout, with the Irish winning convincingly by a margin of 64 runs. Bowlers Craig Young and Mark Adair causing the damage, picking up five wickets between them.

Zimbabwe have now lost three in a row, and with it, the series. In recent matches, they have really struggled to handle the conditions. Zimbabwe have struggled with the bat, with captain Craig Ervine having now top-scored for Zimbabwe in matches 3 and 4. Zimbabwe will be looking to gain some momentum ahead of the ODI series that is due to start next week.

The weather for the final match of the series is set to remain dry, but with cloud cover all day, making temperatures feel slightly cold. Expect conditions that could make the ball swing, which could really aid the fast bowlers.

With the series done and dusted, this could be an opportunity for both teams to give some players a rest and give those yet to play a chance. Despite the potential chopping and changing, Ireland will need to treat this game importantly, as this will be one of the final T20 games they could play before their T20 World Cup campaign starts. Ireland have looked a class apart from Zimbabwe over the last three matches, and despite the smaller price, it’s hard to look beyond the Irish to chalk up another win.

Place a bet on Ireland to win.

Paul Stirling to score over 2.5 fours

After scoring a maiden T20 century for his country in match 3 of the series, Paul Stirling backed that promising innings up with another 39 runs, which included four 4s. Bet365 is offering 1.67 for Stirling to score over 2.5 fours, and with Stirling being in such impressive form, it could be a bet to consider.

Place a bet on Paul Stirling to score over  2.5 fours.

Zimbabwe have really struggled with the conditions, with none of their top order being able to surpass double figures in each of the last two games. The glue that has held the batting lineup together has been captain Craig Ervine, the Zimbabwe top scorer in matches 3 and 4. Surprisingly, his odds are fairly large for this final match as he can be backed at 4.5.

Craig Ervine to be the top-scoring Zimbabwe batsman: Yes (4.5 from Dafabet)

Place a bet on Craig Ervine to be the top-scoring batsman for Zimbabwe.

As it’s the final match of the series, we thought we would include a bet that provides great value and that being whether a century will be scored in the match. Paul Stirling has already achieved it in match 3, and other players have come close with scores posted in the eighties. For a century to be scored in the match, Betway is offering odds of 9.00, and that could be a good bet to end the series with.

Place a bet on a century to be scored in the match.