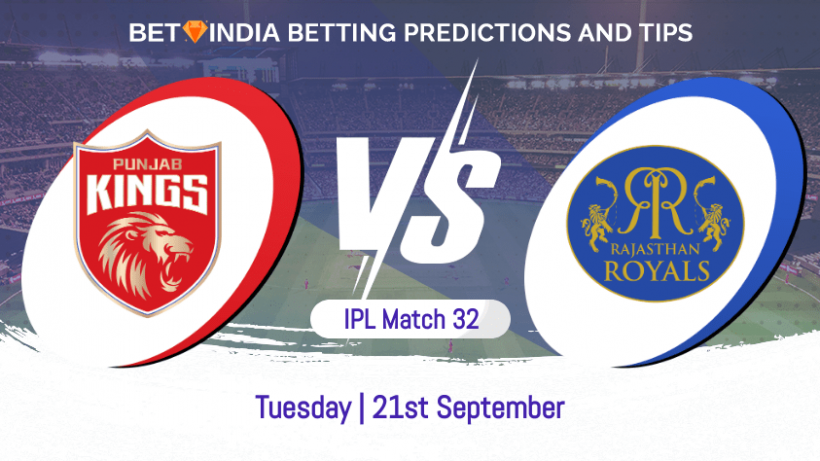 It’s been 13 years since Rajasthan Royals won the inaugural and their only Indian Premier League trophy. In IPL 2021, they built one of their most expensive squads to get their hands on it again, yet they struggled again this season and find themselves in fifth place in the points table. They will be up against Punjab Kings in the Punjab Kings vs Rajasthan Royals 32nd Match IPL 2021 to be played at Dubai International Cricket Stadium on 21st September. Punjab changed their name before the start of this season, but the name change did not bring much luck for Punjab Kings as they are currently in sixth place.

Thanks largely to the openers KL Rahul and Mayank Agarwal, Punjab Kings have won three of their seven matches. The pair of childhood friends continued their form from the last season to add 591 runs in seven games.

KL Rahul, IPL 2020’s Orange cap holder, didn’t let the franchise down with 331 runs this season till date with four fifties. Known for his elegant cover drives, Rahul will be the key to Punjab’s success in UAE.

Ben Stokes and Jofra Archer's injury, along with the sloppy middle-order, proved fatal for the Rajasthan Royals as they ended up winning only 3 of their 7 matches. Add to it the unavailability of Jos Butler, and the situation looks even worse for the Royals.

Royals camp will be happy with the availability of in-form all-rounder Liam Livingstone and the new signing Evin Lewis. Livingstone was the face of the inaugural ‘The Hundred’, and his 348 runs at a strike rate of 178.46 were a big season attraction. At the same time, Lewis finished the CPL 2021 season as the second leading run-scorer with 426 runs. With skipper Sanju Samson’s power-hitting big knocks, it looks like big scoring games are in the pipeline for the Royals.

Smaller boundaries and little grass make it easier for batters to score on the spinner-friendly Dubai pitch. The pitch has few green patches to offer help to the pacers. Clear weather with high temperatures is predicted on the match day.

Always a tight game! The Royals have won 12 of the 22 times they have faced the Kings. Recent history shows a different picture, with Kings having won 7 of their last 11 games against Rajasthan. This clearly puts them ahead of the Royals. In the first installment, Rajasthan came close to the 222 runs target set by the Kings but fell 4 runs short.

In this game, Punjab Kings should win the match by exploiting the unavailability of the key players in the Rajasthan Camp.

The team batting first has won on 34 of the 61 occasions. The second innings makes it difficult for the batters to tackle the spin. Therefore, teams should bat first after winning the toss. Betway is offering the odds of 1.90 on both teams to win the toss.

KL Rahul should be the top batsman from the Punjab Kings camp. The bowlers have had no answer for this classy right-handed batsman when it comes to IPL. Rahul has a habit of starting the innings cautiously, and as he settles, he paces his innings with ease. And he has been doing this for the last two seasons. His recent record (315 runs) in England tour shows that he hasn’t lost his touch and is all to go for his second orange cap.

Place a bet on KL Rahul being the top batsman for Punjab Kings in Punjab Kings vs Rajasthan Royals 32nd Match IPL 2021 on 1xbet. Register with the code 1BETINDIA1 and get a 130% bonus of up to Rs. 13,000.