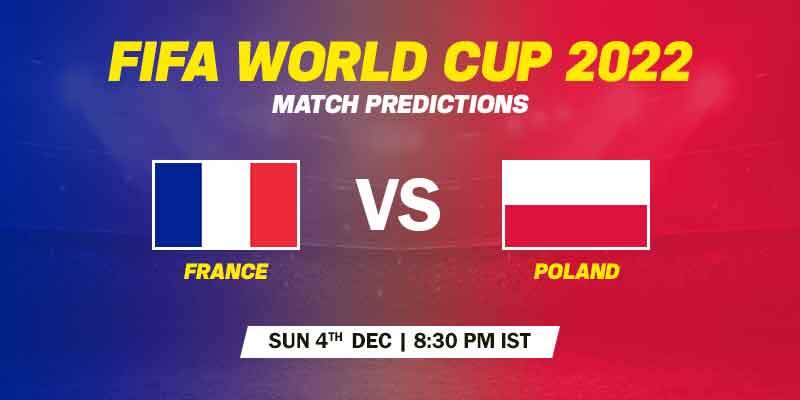 FIFA World Cup 2022 will witness the thrilling knockout clash of France vs Poland. The 2018 champions have come out strong again this year as they have topped the charts of Group D.

Poland witnessed a defeat against Argentina in their last fixture of Group C by 0-2. The game will be an attention seeker because of the involvement of Kylian Mbappe and Robert Lewandowski.

France is coming for their knockout fixture after witnessing an unexpected defeat from Tunisia by 1-0. It was one of the biggest upsets in the tournament but has not affected the position of France in the group point table.

They already qualified for the round of 16 by defeating Australia and Denmark from their group. The defeat would have rather motivated the French squad to play the best of their game from now on and reach closer to the trophy.

Poland has stood up well in their group as the group involved Mexico and Argentina, two of the most experienced teams in FIFA World Cup 2022.

One of the biggest news which is coming right now is the recovery of Ballon’d Or 2022 winner Karim Benzema. He has miraculously recovered and joined the squad for training on Thursday.

This will provide a major push to the French squad if Banzema makes his presence against Poland. It will be good to see the duo Karim Benzema and Kylian Mbappe together again playing for their country.

Robert Lewandowski scored his first world cup goal at the age of 34 but Poland overall has come out as a weaker team in Group C. They started their World Cup campaign with a draw against Mexico and won their second fixture against Saudi Arabia.

However, Poland’s group stage was finished after facing a disappointing loss against Argentina. The result of the last game will affect the confidence of the Polish players.

Both teams are evenly matched when it comes to their defence. France and Poland both have a weaker defence. The only difference they both have is that France has a better attack. We predict that France will have a comfortable win against Poland at a 2-1 scoreline.

Our experts believe that France will score two goals but Poland might not be able to score more than one goal. The match will end 2-1 with France winning the fixture. For some great odds create an account at bet365.