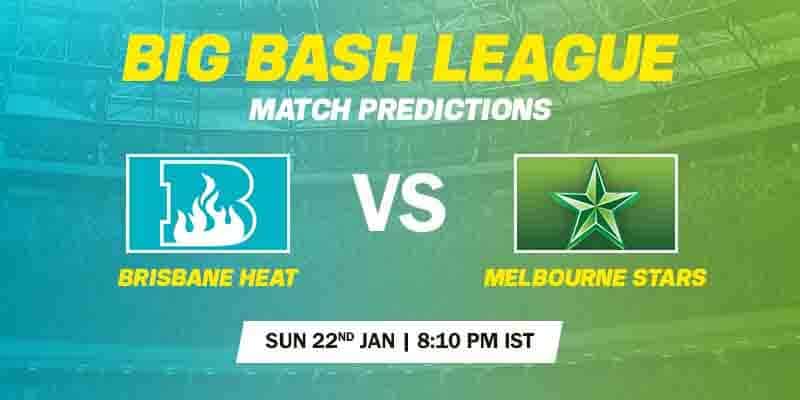 Brisbane Heat and Melbourne Stars are the two bottom teams that won’t be part of the playoffs. This will be the game to give some fans something to cheer about and bettors will look to put their odds on the right bets in online betting.

With a net run rate of -0.721 and just four wins, Brisbane Heat is currently at the last spot in the BBL 2022 point table. Brisbane Heat has nine points in the league and is in close competition with Hobart Hurricanes.

Three points behind Brisbane Heat are Melbourne Stars. With a net run rate of -0.276 and only three wins, the Stars are placed at the bottom of the point table this year and they won’t be able to make it to the playoffs.

Brisbane Heat has struggled with their bowling lineup but they don’t have a good option as a replacement and hence they will be with the same combination as the last game.

Since the 2019-2020 season, Melbourne Stars have not qualified for the playoffs. They have seen a major dip in overall performance but this year the team is going through a nightmare. The Stars are coming to face the same opposition to which they faced a loss in their last game. The team morale looks low and the players are missing the much-required confidence.

The Stars will have the same combinations and no changes are expected.

We predict that Brisbane Heat will score another win over Melbourne Stars because the former has a good batting depth.

Our experts believe that Brisbane Heat will win this match.

It can be a run-fest with a total score of more than 300 in the game.