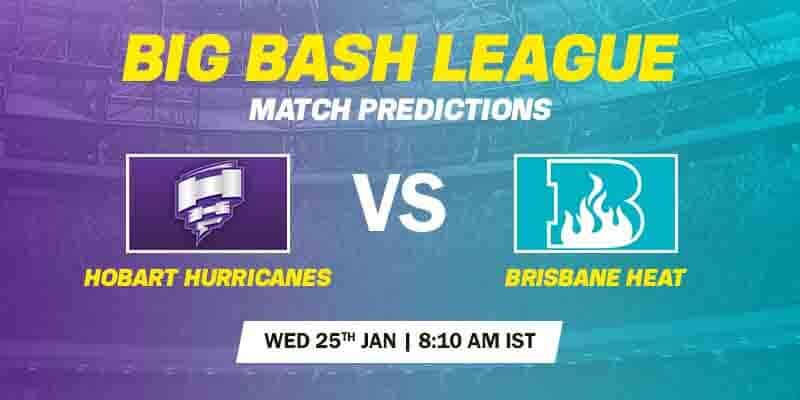 The League fixtures of the Big Bash League season 12 have come to a business end and we have finally identified the teams which will be making their presence in the playoffs. We will witness the first game between HBH and BRH on the last day of the league fixtures.

In their previous meeting, Brisbane Heat registered a comfortable win and as per the odds by the best online bookies, they remain favourite in this encounter as well.

HBH witnessed a sudden dip in their performances during the end moments of the league fixtures in BBL 2022. Their BBL campaign has already ended and there is no chance that the Hurricanes will be part of the playoffs.

BRH is in the third spot in the points table with 13 points. They are still in a very vulnerable position because they are in close competition with Sydney Thunder with a one-point difference.

With three consecutive losses, Hobart Hurricanes' position in the BBL point table dropped down from 5th to 7th and their run to the BBL season 12 with the last loss against Sydney Sixers. Overall, the Hurricanes showed a bit of inconsistency in the tournament but as the league fixtures came to an end, the batters from the Hurricanes lost their momentum and were unable to score runs.

Hobart Hurricanes are already out of contention for the play-off spot and might go with this line-up.

As compared to last year's outing, Brisbane Heat has played exceptionally well. They are currently at the third spot in the BBL point table with 13 points and 6 wins. However, the upcoming fixture is a must-win game for the Heat because they are in close competition with Sydney Thunder and in no situation, Brisbane Heat would like to lose their position in the point table. The franchise will be confident to play against the Hurricanes as they defeated the latter in the previous meeting.

Brisbane Heat has finally figured out the winning combination and they won’t be doing any changes in the playing XI.

Hobart Hurricanes have lost their winning momentum but Brisbane Heat has got the right rhythm. We predict a win for Brisbane Heat in the upcoming fixture.

Our experts believe that Brisbane Heat will win the match.

Both teams to hit more than 5 sixes.