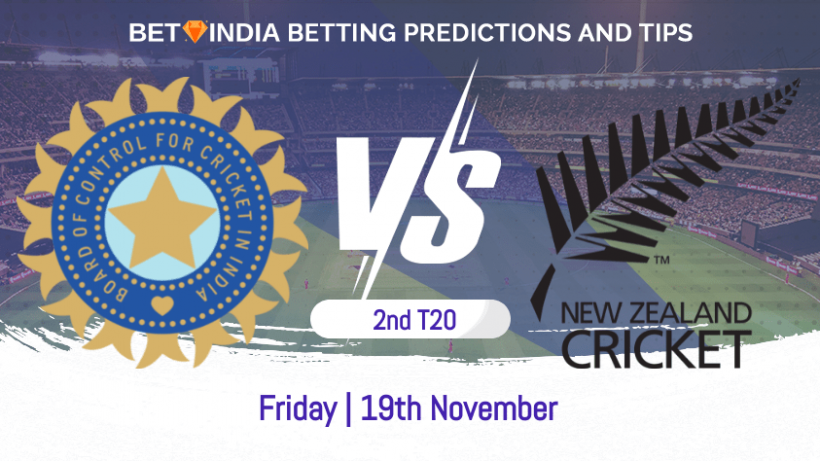 The second match of the T20 series between India vs New Zealand is quickly upon us as the two sides are set to lock horns in Ranchi following a classic in the first contest between the two.

India would go on to eventually win the first match of the series by 5 wickets, chasing down the New Zealand total of 164 with just two balls to spare.

India know that with a win here, they can clinch the T20 series and get the Dravid era off to the perfect start. India are once again favoured for the clash and can be backed at 1.33. To level, the series New Zealand are priced at 3.40.

It was a good start for this new Indian cricketing era, and the victory in the first match of this series saw India win their fourth straight T20 contest.

Chasing down 164, India got off to a solid start with Rohit Sharma, starting for the first time as the full-time T20 captain scoring a measured 48 off 36 balls. India's innings then burst into life with some fine power hitting from Suryakumar Yadav, who scored 62 off just 40 balls. The rest of the batting lineup had a pretty quiet day with Rishabh Pant scoring the next highest total of just 17; the Indians were just about in control and got over the line with two balls to spare.

The win will go some way in healing the wound of a poor World Cup, but Dravid and his side will be looking to prove that they are on their way back to being the best T20 side in the world with another win here.

New Zealand showed why they are such a tough nut to crack and clearly demonstrated why they are one of the best sides in the world despite losing the first match of the series.

Playing without their best player in Kane Williamson, playing in front of fanatical home support with very little support for themselves, and playing with the memory of last Sunday's T20 World Cup defeat, New Zealand produced a typically determined display. Martin Guptill and Mark Chapman did the bulk of the scoring, with Guptill scoring an impressive 70 off 42 deliveries and Chapman 63 off just 50. A total of 164 was never likely to be enough, but to their credit, they fought hard with the ball taking some late wickets to take the match down to the wire.

It's going to be another big ask for the Black Caps to level the series and win this match, but you know with this New Zealand side, they will be doing everything in their power to get a vital victory.

Like many pitches in this part of the world, the pitch should offer assistance to both the seamers and spinners. Ravi Ashwin did some damage in the first match, and look to him to be a thorn in the side of the Black Cap batsmen once again.

Look for the side that wins the toss to bat first and make the most out of the better batting conditions.

India would have been pleased with the start they made in this new era under Rahul Dravid. It was a match they always seemed in control of, but there would have been a moment of concern as they limped over the finish line.

Rohit Sharma would have been ecstatic to get his tenure as T20 captain off to a winning start, and he will be looking for his side to clinch the series at the first time of asking.

Despite some significant player absences, New Zealand showed their trademark grit and spirit in taking the first match of the series all the way to the final over. However, like in the first match, they seem to be up against it once again.

It was a big win for India, and it was very much needed after a succession of heartbreaking defeats against the Black Caps. With the monkey off their back, we expect India to kick on and claim another victory.

Martin Guptill currently finds himself ranked 3rd all-time as the top T20 international batsman, and he is rapidly closing on Virat Kohli in second place. Guptill had a mixed World Cup averaging a mixture of big and low scores. It seems that if Guptill can survive the power play, he can score big and bat long.

Guptill can play well in the conditions and has the ability to get New Zealand off to a great start regardless of whether they bat first or second. He top-scored for the Black Caps in match one, and we like his price of 3.50 to repeat the feat here.

Place a bet on 1xbet by registering with the code 1BETINDIA1 and get a 130% bonus of up to Rs. 13,000 if you bet on Martin Guptill to be New Zealand's top batsman in India vs New Zealand 2nd T20.