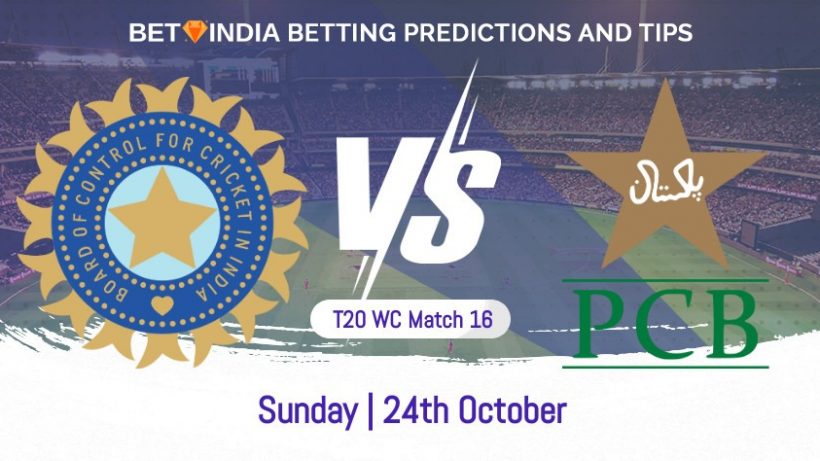 Does it get any bigger than this? One of cricket's greatest rivalries headlines the first Sunday in the Super 12 phase of this year's T20 world cup, as two old rivals meet in India vs Pakistan. It's a fixture that stops the cricketing world, and billions of people from all over the world will be tuning in to see who comes out on top.

These days, these two sides only ever meet in ICC events. They last met back in 2019 when India beat Pakistan in the group phase of the 50 over World Cup. They have met five times in ICC events, with the Indians winning on all five occasions.

This year, India are the tournament favourites, and they can be backed at 3.00 to lift the World Cup in just a few weeks' time.

They come up against a Pakistan side that, leading into the tournament, has played the most T20 cricket out of all of the competing nations at this World Cup. Pakistan are the third-best T20 side in the world and will be more than a match for their Indian counterparts.

India are worthy favourites for this year's tournament. They have a side packed full of experience, and despite the tournament being played in the UAE, they should have some fantastic support and conditions that should be perfect for them.

This is Virat Kohli's last tournament as Indian captain in the T20 format, and he will want to go out with a bang. There were plans for Kohli to potentially open, but they will most likely be shelved due to the great form of openers KL Rahul and Rohit Sharma, so expect Kohli to come in at three.

India have an advantage as every member of their squad was playing in the IPL held recently in the UAE. Many were involved with sides that went deep into the tournament, so the Indians should have an excellent handle on conditions.

One man who heads into the tournament in flying form is KL Rahul. Rahul was the IPL's leading scorer in the group stages, scoring 626 runs across 13 matches averaging 48. Rahul brings great calmness to the Indian batting lineup, and he is priced at 3.75 to be his side's top scorer.

Pakistan are a chaotic team, controversy and drama never seem too far away, and that has been the case in the lead-up to this year's World Cup.

Rocked by the sudden coaching resignations of Misbah-ul-Haq and Waqar Younis, a whole raft of players who were previously omitted from the World Cup squad were then called up by the new regime, couple this with both New Zealand and England cancelling their planned tours, it's been far from the perfect preparation.

Pakistan, like most big events they play in, arrive at this tournament as complete dark horses. They boast a string of talent that is littered amongst the squad. They have arguably the world's best T20 batsman in Babar Azam and one of the world's most exciting young bowlers in Shaheen Afridi.

What also can't be overlooked is Pakistan's comfort in these conditions. For years, Pakistan have played their international home fixtures in the UAE, and they have an excellent record here. They have played six T20 matches at the Dubai International Stadium and have never lost.

On their day, they can beat anyone, and the odds of 2.75 could be a little on the long side.

Betting Predictions for India vs Pakistan

Let's take a look at a few important betting predictions for India vs Pakistan:

Due to the intense rivalry between these teams, this is a tough one to call.

India are the favourites; they have a great team comfortable in the conditions and have an excellent recent record against Pakistan; many of this team were involved in their 50 over World Cup match they won against Pakistan, so they should know what it takes to beat their rivals.

However, nothing is ever easy in the world of T20s, and it only takes the loss of a few quick wickets or a batsman to score a big one, and the game can flip on its head.

Pakistan have a fierce and respected bowling attack, but the Pakistani batting lineup, particularly the middle-order, is weak. India have the ability to score runs throughout their batting lineup, so they can post a big total or manage a controlled chase. With Pakistan, so much depends on openers Babar Azam and Mohammad Rizwan; if either of them fails, it could leave the middle-order exposed.

We think the strength in batting could be the ultimate difference between the sides, and we are backing India to edge what is going to be an exciting and tense affair.

It's worth noting that if Pakistan win the toss, they may elect to bowl first as they have won their last eight T20 fixtures when they have chased.

We have already highlighted the important role KL Rahul could play in this match, but it would be wrong if we didn't talk about Virat Kohli, the game's biggest star playing in the world's biggest match.

Kohli would have been disappointed that his RCB side was unable to win this season's IPL, with them losing at the first eliminator stage. However, as the IPL went on, his performances with the bat got better and better, and he top-scored in their last game with a spirited 39.

This is the sort of occasion that Kohli lives for, and there will be no man more determined to lead his side to victory than the Indian captain. Odds of 3.25 to be India's top-scoring batsman could be one of the better bets on offer in this match.

Place a bet on 1xbet by registering with the code 1BETINDIA1 and get a 130% bonus of up to Rs. 13,000 if you bet on Virat Kohli to be India's top batsman in India vs Pakistan T20 World Cup.