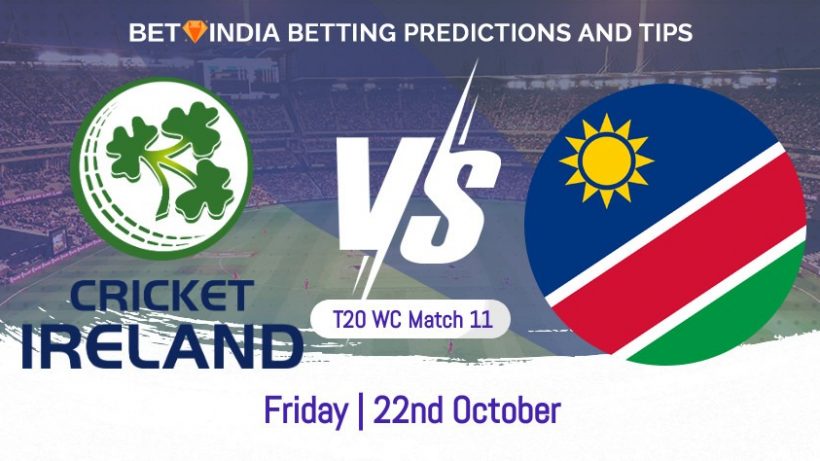 We have entered the final round of round 1 games in group A, and next up is what we expect to be a thriller in Ireland vs Namibia. Both sides head into this match with one win apiece, knowing that the winner of this crucial match will progress to the Super 12 phase of the tournament.

Ireland will have been disappointed with the manner of their defeat against Sri Lanka, losing by a whopping 70 runs. A win against the Sri Lankans would have seen Andrew Balbirnie's men qualify for the tournament's next phase. Instead, they will need to bounce back against a tough Namibian side if they want to achieve their main objective of qualifying for the next phase.

Playing their first major cricket competition since the ODI World Cup in 2003, Namibia rebounded nicely after a big defeat to Sri Lanka in their opening group game. The Namibians were the clear underdogs against a more experienced Dutch side who had beaten them in the 2019 qualifying phase. Needing to chase a total of 165 to win, Namibia chased down the total with one over to spare, sparking some fantastic scenes.

They will head into this match full of confidence but as underdogs priced at 2.63. Ireland, who are favoured to win, can be backed at 1.50.

Sometimes you need to hold your hands up and just admit when the better team has beaten you, and this is what happened to Ireland following their defeat by Sri Lanka. Wanindu Hasaranga was the star for Sri Lankans with the bat, top-scoring for Sri Lanka with a 71 off just 47 balls, helping guide the Sri Lankans to a total of 171.

In Ireland's pursuit, they fell way short, being bowled out for just 101. Most of the Irish batters struggled to get going – chasing big runs they were often caught holing out in the deep. Andrew Balbirnie was the exception, with the captain scoring a measured 41 off 39 balls. Balbirnie is 4.50 to top score for his country again.

The Dutch side reached a total of 164 for just the loss of four wickets, which looked promising. However, some assured and powerful batting between captain Gerhard Erasmus and Namibia's best player David Wiese saw the Namibians reach the total with an over to spare.

It's a significant win for Namibia, with many predicting before a bowl had been bowled that they would finish as the bottom-placed team in Group A. Instead, they now have a chance to reach the Super 12 phase and will achieve it with a victory over Ireland.

Much was made before the tournament of the inclusion of former South African bowler David Wiese. Wiese has already proved his worth after averaging 36 across his first two innings. He has only taken one wicket so far in the tournament and will be looking to change that in this match. Wiese is currently priced at 3.75 to be his team's top bowler, and that could be a worthwhile bet.

This contest will take place in Sharjah. This stadium is one of the better pitches in the UAE for allowing the ball to come onto the bat. The scoring is expected to be higher here than in other stadiums being used in this World Cup.

Betting Predictions for Ireland vs Namibia

Let's take a look at a few important betting predictions for Ireland vs Namibia:

In a group that contained Sri Lanka, it was always going to most likely come down to a mini playoff of sorts as to who would take the second place in the group. Many would have thought it would have been a showdown between Ireland and the Netherlands, but Namibia have forced themselves into the qualification picture.

In normal circumstances, you would probably back Ireland to win here, but this is a huge game with a lot on the line, making things a lot tighter and edgier.

The pressure is on Ireland to bounce back following their poor defeat against Sri Lanka; they have all of the pressure on them in this match, whereas the Namibians have nothing really to lose. It would be a big blow if Ireland weren't to qualify for the Super 12 phase of the competition.

Irelands bowling will need to be a lot tighter than it was against Sri Lanka. Ireland and Namibia have played four times in a time period that spans eight years, with the Irish winning on every occasion.

In what is bound to be a tense and nervy encounter for both sets of fans, we are going to side with the Irish to win what could be a classic encounter.

In a pivotal match, we always believe that any top batsmen bets should be placed on men in form. We have already provided Andrew Balbirnie's odds, but Kevin O'Brien is another batsman who could play a leading role for Ireland.

O'Brien, who opens the batting alongside Paul Stirling, has had a tricky start to the tournament scoring only 9 and 5 runs in his two innings so far. However, O'Brien does have form in the UAE as he has scored a century in Oman.

O'Brien is vastly experienced and often plays his best cricket in the big games. Ireland need him to step up in this match, and at odds of 4.50 to be his team's top scorer, we will back him to find his best in this crunch encounter.

Place a bet on 1xbet by registering with the code 1BETINDIA1 and get a 130% bonus of up to Rs. 13,000 if you bet on Kevin O'Brien to be Ireland's top batsman in Ireland vs Namibia T20 World Cup.