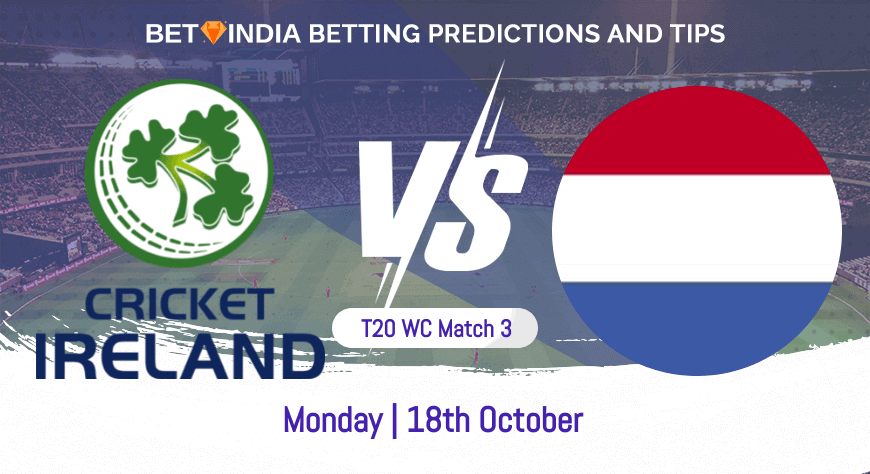 On Monday, 18th October, Group A of the T20 World Cup gets underway between two sides that will fancy their chances of progressing out of the group stage as Ireland take on the Netherlands.

Both have good records at previous T20 World Cups, with Ireland playing in their sixth T20 World Cup and the Dutch their fourth. Ireland come into the match as slight favourites as the 12th ranked side in the world, with the Dutch back in 17th. Ireland can be backed at 1.67 for the win, with the Netherlands being priced at 2.20 to cause the minor upset.

Unlike many of their fellow emerging nations that make up the majority of the group stage, Ireland have had the opportunity to play against several of the world's more established teams. In trying to prepare for the tournament, Ireland played T20 series against South Africa and Zimbabwe. Ireland's strength lies in their top-order batting, with the trio of Kevin O'Brien, Paul Stirling, and Andrew Balbirnie all established at this level. Stirling, in particular, on his day, can be one of the world's most destructive batsmen, and his price of 3.00 to be his team's top scorer could be a great way to bet.

Playing in the UAE will be new to some of Ireland's players, and they will need to adjust to the slower surfaces they will encounter here. One player they hope has a good tournament is spin bowler Craig Young. Young proved to be a real difference-maker in Ireland's series win over Zimbabwe, taking wickets at vital times, and for this match, he is priced at 2.63 to take over 1.5 wickets which could be a bit of a steal.

Team News for the Netherlands

The Netherlands qualified for the World Cup by winning the qualifying event, winning eight of their nine qualifying games, including a victory over Ireland.

The Dutch are a side racked with experience, none more so than 41-year-old Ryan ten Doeschate. Ten Doeschate has honed his skills over the years in the English county cricket scene. A class player across all formats, ten Doeschate averages 42 in the T20 format, operating with a strike rate in the 130s. He is priced at 5.50 to be his team's top scorer.

Another player to keep an eye on is Brandon Glover. Glover was the top wicket-taker in the qualifiers, taking 16 wickets over 8 games with a strike rate of 10.8. Glover is the man the Dutch will turn to try and dislodge that pivotal Irish top-order trio. With odds of 2.63 to take over 1.5 wickets, that could be one of the better betting angles of the contest.

This crucial contest will take place in Abu Dhabi at the Zayed Sports City Stadium. The stadium is one of the better pitches in the UAE for allowing the ball to come onto the bat, and the scoring has been higher here than in other stadiums being used in this World Cup.

Betting Predictions for Ireland vs Netherlands

Now let's take a look at a few important betting predictions for Ireland vs Netherlands:

On paper, Group A consisting of Ireland, the Netherlands, Sri Lanka, and Namibia, looks like a much tougher group than Group B. With Sri Lanka favoured to advance through to the Super 12 stage, these two sides will most likely be battling it out for the second spot in the group.

Ireland wants to be considered an elite cricketing nation and have some players worthy of that mantle, but they need to make it count in these types of tournaments. The Dutch have the experience and match-winners in their side, but this contest will be decided by who can handle the slow and turning conditions the best.

Knowing how pivotal this competition could be to the future of Irish cricket, we are backing their big names to come to the fore and edge what could be an exceptionally tight contest.

Place a bet on Bet365 and get a welcome bonus of up to Rs. 4,000 if you bet on Ireland to win in Ireland vs Netherlands T20 World Cup.

Either team to win the toss can be backed at 1.91. On a pitch that should offer something to both batsmen and bowlers, the team that wins the toss will be looking to chase as the ground seems to favour the chasing team slightly. For the team that bats first, the average score in the first innings is 156, so anything over this will be tough to chase.

Place a bet on Betway and get a 100% welcome bonus of up to Rs. 2,500 if you bet on the toss outcome in Ireland vs Netherlands T20 World Cup.

A man in fine form over the recent series win against Zimbabwe was Kevin O'Brien. Coming into that series, O'Brien was a man who was struggling for any form, but he quickly put this right and was Ireland's top scorer in the series. O'Brien, a veteran in this Irish team, is more than happy for his batting partner Paul Stirling to get the plaudits, but he is a class player in his own right. At 4.50, he is flying a little under the radar when it comes to being Ireland's top scorer, and we think that could be a bit of a generous price.

Place a bet on 1xbet by registering with the code 1BETINDIA1 and get a 130% bonus of up to Rs. 13,000 if you bet on Kevin O'Brien to be Ireland's top batsman in Ireland vs Netherlands T20 World Cup.