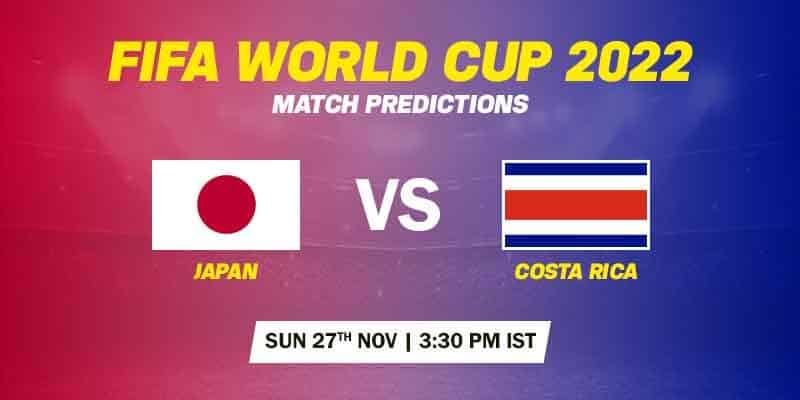 From group E, Japan vs Costa Rica FIFA World Cup 2022 will be taking place on Sunday at Ahmad bin Ali Stadium. Both teams are at completely different ends of the group table. Japan are coming after a massive win over Germany and Costa Rica suffered a humiliating loss against Spain.

Japan gave one of the biggest upsets in the football world as they defeated Germany by 2-1 on Wednesday. After taking an early lead, the Germans were in control of the match but upbeat Japan had other ideas. Japan scored 2 goals in the last 15 mins to snatch a deserving win.

Costa Rica, on the other hand, witnessed a complete thrashing from Sapin as they were defeated by 7-0. The morale of the team will be low when they face Japan but would be hoping to revive the quality of their game.

The Samurai Blue will be high on confidence as they come for Japan vs Costa Rica fixture because they defeated one of the most feared teams in the world of football. Japan showed their domination in the qualifiers itself by scoring 46 goals and conceding only 2 goals overall. They won 100% of their qualifying fixtures. Now a win against Germany will give them even more confidence going into this match. Japan showed brilliant perseverance against Germany as they maintained their calm and overpowered the opposition in the last two minutes. Takumi Minamino and Yuya Osako will be the trump cards for the team against Costa Rica.

Costa Rica had a very disappointing start to their World Cup campaign. They witnessed a 7-0 loss against Spain. It will be difficult for them to bounce back from that loss as the team morale will be low and Japan looks dominating after their win against Germany. Costa Roca will have to work hard on their defence skills but as things stand – it looks like a difficult task against Japan.

Costa Rica has a very tough task ahead on Sunday. They need a good game that can help them to bounce back in the tournament. Japan are expected to dominate the game and our experts feel that the game will end in favour of Japan by 2-0.

Our thinking is that it could be a 2-0 win for Japan in Japan vs Costa Rica fixture on Sunday. For some great odds create an account at bet365.