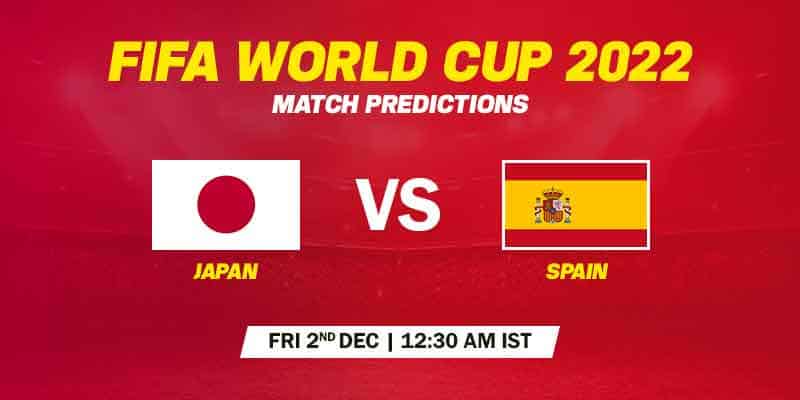 There is a high possibility of some unexpected result during the Japan vs Spain fixture in the FIFA World Cup 2022. Spain are at the top spot and Japan at the second with just a point difference. A win or even a draw will help Spain to qualify for the next round and Japan needs a win to guarantee their progress.

Japan started their World Cup campaign after scoring a thrilling win against the most feared team in the group Germany by 1-2. However, they lost their next fixture but the Samurai Blue still have a chance to qualify for the next round. All they have to do is to win against Spain or at least end the game with a draw. Japan has kept an offensive approach in all the games and they would like to continue the same.

Spain is known for their style of football across the globe. They are playing like champions. Spain started their World cup journey with a win and drew their game against Germany. They are at the top of the point table in Group E and would like to end their group stage with a win.

Before the beginning of the FIFA World Cup 2022, Japan was making headlines with their style of play and 4-2-3-1 formation. They have adopted an attacking approach and it is working in favour of the team. Daichi Kamada, Takehiro Tomiyasu, Takumi Minamino, Kyogo Furuhashi, and the 21-year-old superstar, Takefusa Kubo will be the key players for Japan who might overpower the opposition in 90mins.

The Red Fury has come out as one of the most ferocious teams in Group E. They defeated Costa Rica in their first game and their last game against Germany ended up as a draw. Spain has already registered their place in the next round and a win over Japan will declare its dominance in the group. La Furia Roja plays a game of possession and Japan might find it difficult to deal with.

Spain reached the semi-final stage in Euro 2022 tournament and won their last four world cup qualifier games. La Furia Roja relies on the fitness of its players and keeps the ball in motion through accurate passes. Japan’s aggressive approach might find it difficult to deal with and Spain might win the game by 1-3.

We predict that Spain will score a win in the upcoming fixture by 1-3 against Japan. For some great odds create an account at 1XBET.

Place your bets on 1XBET