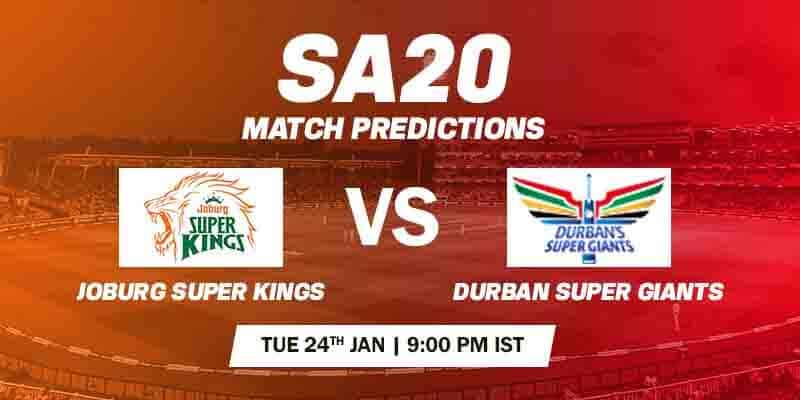 Tuesday will be a double-header day for SA20 and in the second game, JSK will lock horns with DSG. JSK vs DSG will take place at Wanderers Stadium on Tuesday, 24th January.

Both the teams are at a four-point difference in the SA20 point table and Durban Super Giants is behind Joburg Super Kings on net run rate. That is one of the reasons that online bookies have set the odds for both teams almost the same ahead of the encounter.

With a net run rate of -1.128 and three wins in the tournament, Joburg Super Kings are currently in the fourth position in the point table. They will be looking forward to scoring another win to gain some points in the tournament.

Durban Super Giants are having a horrible first season and they are currently at the last spot in the SA20 League. There are very less chances that the franchise will be able to make it to the next round.

While being at the fourth spot in the SA20 point table, the Joburg Super kings have displayed inconsistency in the tournament. They started the campaign with a win but lost two consecutive games. The batters are struggling to score runs and the bowlers are finding it hard to pick wickets. The major concern is the middle order which is not at all contributing to the team’s success.

Faf du Plessis will be going with the tried and tested combination for JSK. Here is the predicted XI:

Hopes of qualifying for the next round are getting shattered with every game Durban Super Giants is losing. They are at the last spot and now only a miracle can save them in the tournament. Durban Super Giants players are not performing at their best and it is because of the same reason they are finding it difficult to win matches.

Durban Super Giants players are not performing at their best so they might change a player here or there. This could be the playing XI for the Giants:

Our experts believe that Joburg Super Kings will register a win.

Faf du Plessis will score over 50.