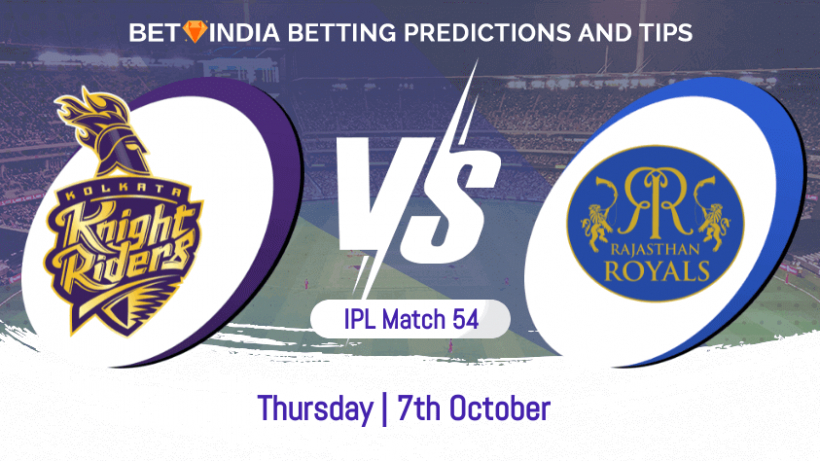 Thursday 7th October sees both the Kolkata Knight Riders and Rajasthan Royals play their last group matches of the 2021 IPL season when they face each other in the 54th match of the competition. We bring you the most accurate betting predictions and tips for this all-important match.

The Knight Riders control their own destiny in terms of playoffs qualification. Currently sitting in the 4th and final playoff spot, a win here against a struggling Royals side will all but see them through. Level on points with the Mumbai Indians, on 12 points each, they know a win is vital if they are to qualify for the next phase of the competition.

They may still qualify even if they lose, given their superior NRR, but they would ideally want not to leave their fate in the hands of others. Kolkata have the opportunity to put real pressure on the Mumbai Indians as they have the luxury of playing before the Indians take on bottom-ranked Sunrisers Hyderabad on Friday the 8th. A win doesn't technically guarantee qualification for Kolkata as Mumbai could still pip them through net run rate, but that would require Mumbai to win really big. So a win here would put Kolkata firmly in the driving seat.

Since the second phase of the IPL started in the UAE, the Knight Riders have won three and lost three of the six matches they have played. They had a nervy end to their last match, beating bottom-placed Sunrisers Hyderabad by six wickets but only surpassing the Sunrisers' total with two balls to go, which was far finer than they would have liked.

Shubman Gill was the star of the show scoring a measured and controlled 57 off 51 balls to help guide the Knight Riders past the Sunrisers' modest total of 115. With the ball, the wickets were shared between Tim Southee, Varun Chakravarthy, and Shakib Al Hasan. If the Knight Riders are to claim the victory they so desperately need, more of the same will be needed here.

The Royals' indifferent season is about to come to an end, thanks mainly to a thrashing by the Mumbai Indians in their last match. Things started positively before the wheels came off, with the Royals only managing to score a total of 90 in their 20 overs. The Royals lost their last nine wickets for just 60 runs.

For the Royals, they sit two points behind the Knight Riders; their qualification hopes are hanging by a theoretical thread. The Royals need to win and win big in order to boost their net run rate, and then they need to hope other results go their way. Given the hit their NRR took because of the way they lost to Mumbai, it's a long shot that they qualify, but they should still enter this match trying to do all they can to get the victory.

Batting has been a thorn in the side for the Royals all season, as they have often struggled to get to grips with the slow pitches in the UAE. The Royals have changed around their starting lineups to try and get the balance right. Despite a surprise success against Chennai, they are still trying to find the right answers.

The match is due to be held at the Sharjah Cricket Stadium. With the weather set to be perfect, everything should be set up for a tense and exciting game. There have been quite a few low scores in the last few games held at Sharjah, with teams struggling to get past 140. Batting will get harder as the game goes on; the team that bats first averages 149, and the team that bats second averages 131, so there is a definite advantage to batting first.

Betting Predictions for KKR vs RR

In what is an important match for both teams, the betting has the Knight Riders as favourites at 1.57. The Royals can be backed at 2.38. The recent head-to-head between the sides is close, with Kolkata winning three of the last five. However, the Royals were the winners when these sides met earlier in IPL 2021.

It's really difficult to have any faith in the Royals batting lineup as no matter which way they go, they can't seem to post or chase any half-decent totals. In cricket, especially a format as competitive as the IPL, anyone can beat anyone on any given day. Still, the smart money has to be on the Knight Riders to win and secure qualification for the next phase.

Either team to win the toss can be backed at 1.91. On a pitch that could be tricky to bat on, the side that bats the best will win. Look for the team that bats first to post a total of above 150, which would likely be a tricky chase. An interesting stat to take into the match is that in the Knight Riders' last nine fixtures, the team batting second has gone on to win the game.

In a match like this, it makes sense to back a batsman who we know is in good form. With a match like this potentially decided by the finest of margins, we are going to back Shubman Gill to be the Knight Riders' highest scoring batsman. Gill was the controlling force behind the Knight Riders' victory against the Sunrisers. Gill can be backed at 4.33 to be his team's top scorer.

Place a bet on 1xbet by registering with the code 1BETINDIA1 and get a 130% bonus of up to Rs. 13,000 if you bet on Shubman Gill to be the Knight Riders' top batsman in Kolkata Knight Riders vs Rajasthan Royals 54th Match IPL 2021.