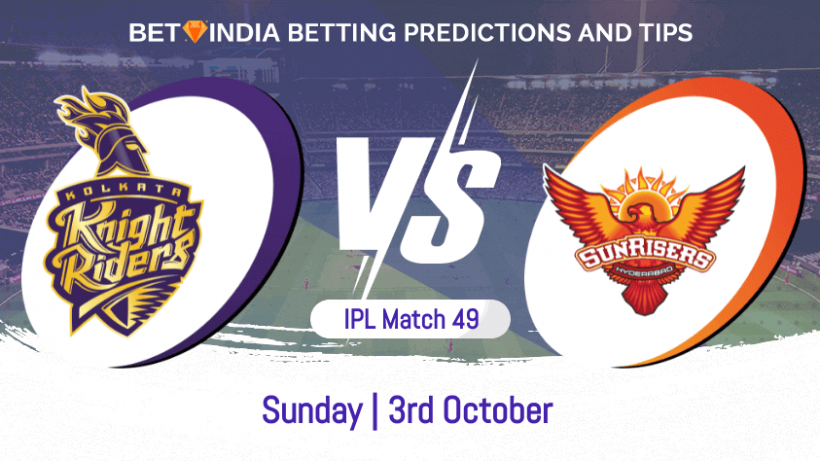 Clinging onto the final playoff spot thanks to their superior net run rate, the Knight Riders are level on points with three other teams – the Punjab Kings, Rajasthan Royals, and Mumbai Indians. A loss for any of these teams will see their playoff hopes dashed significantly, so it's absolutely key that the Knight Riders get the victory here.

Sunrisers Hyderabad are the first team in this year's competition who have been officially eliminated from playoff contention. It's been a massively disappointing season for the Sunrisers as they have only managed to win two matches all season, winning just one of their last seven.

Despite the Sunrisers already being eliminated, they will play a huge part in deciding who qualifies for the playoffs. They have the Knight Riders, RCB, and Mumbai Indians all slated in their remaining schedule. With nothing left to play for, the Sunrisers could be an exceptionally dangerous team to face. This could be one of the season's most intriguing matchups in a playoff race that is bound to go down to the wire. The Knight Riders can put down a significant marker to all of their playoff rivals with a win.

Since the second phase of the IPL started in the UAE, the Knight Riders have won three and lost two of the five matches they have played so far. They will head into this match full of confidence as they have beaten the Sunrisers the last three times that these sides have played.

One issue that is dominating the Knight Riders' preparation is the form of their captain Eoin Morgan. Throughout his illustrious T20 and ODI career, Morgan has gone through periods of poor form, but currently, he is offering nothing to the Knight Riders batting lineup. With scores of 7,8,0, and 2, it’s absolutely imperative that the England Captain rediscovers his form quickly.

In their last match, the Knight Riders would have been disappointed that they were unable to put any significant distance between themselves and the Punjab Kings. Having the opportunity to draw four points clear of the Kings, defeat has now brought the two teams' level. It wasn't a bad performance by the Knight Riders, with Venkatesh Iyer and Rahul Tripathi scoring some vital runs; however, KL Rahul turned the tide of the match with his 67 of 49 balls proving decisive and giving the Kings the vital win they needed.

With an array of cricketing talent across both the batting and bowling units, it’s been very strange to see the Sunrisers struggle as much as they have done in this year's tournament. Unable to take vital wickets at crucial times and some of their batsmen being out of nick for far too long in this tournament has all contributed to the dismal season they have experienced.

Heading into the match, much of the noise around the Sunrisers has been the continued absence of former captain David Warner who has been dropped from the side and looks to have finished his IPL season early.

Not to be deterred by everything that is happening off the pitch, the Sunrisers have too much pride in their side to roll over without a fight. Jason Roy, Kane Williamson, and Jason Holder will all be determined to end their campaign on a high. Teams with nothing to play for can be dangerous opposition, and despite the disparity between the two sides in the table, this should be a close match.

The match is due to be held at the Dubai International Cricket Stadium. With the weather set to be perfect, everything should be set up for a great game. The pitch is a slow and sticky one which can make batting difficult. Traditionally, a score of 160+ plus is a great total, but the average score for IPL games held at the venue is 144. The team that wins the toss has options; they can try and chase or try and put a competitive score on the board as a big total could be easily defended here.

As mentioned earlier in the preview, this has been a matchup that has been dominated by the Knight Riders, who have won the last three matches the sides have contested; however, the Knight Riders need to beware of a wounded side. Despite the Sunrisers being stranded at the bottom of the table, they do contain some of the world’s finest T20 players.

The Sunrisers squad will want to put the Warner debacle behind them and make positive headlines on the pitch. With some of the Knight Riders batsmen being out of sorts, I am unsure if they can deliver under this pressure. In what might be a bold leap of faith, we are going to back the Sunrisers to pick up just their third win of the campaign.

Either team to win the toss can be backed at 1.91. On a pitch that could be tricky to bat on, the side that bats the best will win. Look for the team that bats first to post a total of above 150, which would likely be a hard chase. An interesting stat to take into the match is that in the Knight Riders' last eight fixtures, the team batting second has gone on to win the game.

Place a bet on Betway and get a 100% welcome bonus of up to Rs. 2,500 if you bet on toss outcome in Kolkata Knight Riders vs Sunrisers Hyderabad 49th Match IPL 2021.

Despite those around him struggling with the bat, one player who is seeing the ball extremely well is Nitish Rana, who has three straight scores of thirty runs plus. When these sides last met, Rana was the player of the match thanks to his match-winning knock, where he scored 80. In a must-win match like this one, it makes sense to back the man in form. Rana is 5.50 to be his team's best batsman and could be one of the best betting angles of the match.

Place a bet on 1xbet by registering with the code 1BETINDIA1 and get a 130% bonus of up to Rs. 13,000 if you bet on Nitish Rana to be the Knight Riders' top batsman in Kolkata Knight Riders vs Sunrisers Hyderabad  49th Match IPL 2021.