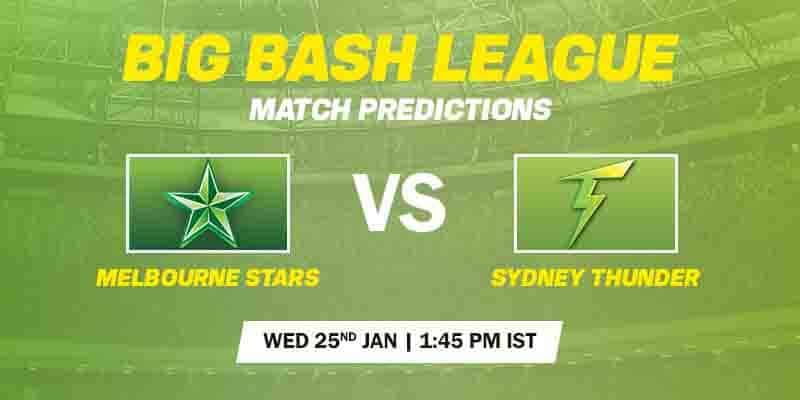 The Big Bash League season 12 has come to its business end and the final four teams are almost ready to face each other in the playoffs. On the last day of league fixtures, we will witness MLS vs SYT at Melbourne Cricket Ground.

The fixture is an important one for Sydney Thunder to fix their position in the playoffs. And bookmakers are giving out some fancy odds for this tie.

MLS journey to Big Bash League 2022 came to an end at a very early stage of the tournament. The only good memory that they can take from season 12 is that they won twice against Adelaide Strikers.

SYT are in a must-win situation. They are in close competition with Melbourne Renegades and the match against the Stars is their last chance to make it to the playoffs.

With only three wins and a net run rate of -0.270, Melbourne Stars have finished their BBL season 12 campaign at the last position in the point table. Throughout the season, players from Melbourne Stars found it difficult to play their best game. The primary reason for their disappointing loss was the low-quality bowling and weaker middle order. The franchise would like to end its campaign on a positive note on Wednesday by defeating Sydney Thunder.

Stars have nothing to play for and might make a few changes here and there. Here is the Predicted XI

Thunder has found itself in a very vulnerable position in the tournament. They are in close competition with Melbourne Renegades and Brisbane Heat. They are in a must-win situation to make sure that they become part of the playoffs. Sydney Thunder is coming to play against the Stars after witnessing an embarrassing loss against Sydney Sixers in the last game.

Sydney Thunder faced a disappointing loss in the last game but they won’t be doing any changes in their playing XI.

This might be a run-feast and expect a total of above 300 in the match.

David Warner will score over 75.