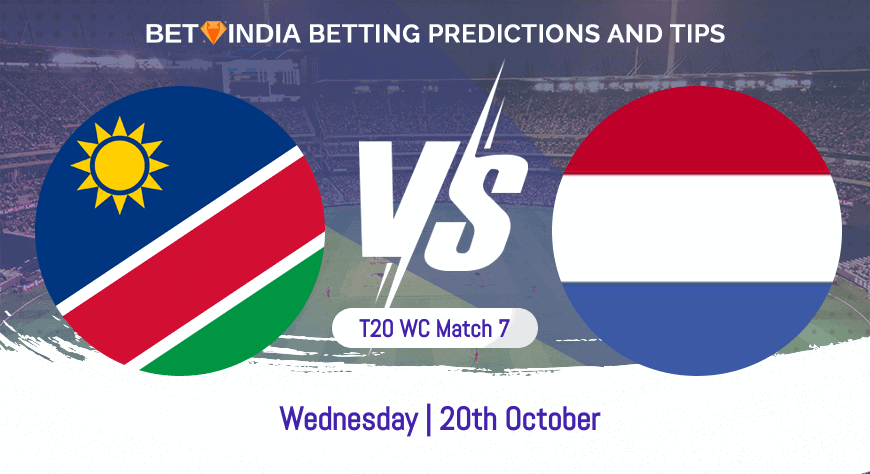 Two teams that suffered losses in their opening group games meet in this crucial Group A clash – Namibia vs Netherlands. Both teams need to win to avoid crashing out of the group stage.

In their first game, Namibia had a tough task and ended up losing to Group favourites Sri Lanka by seven wickets. The Netherlands would have been disappointed about the manner of their defeat to Ireland, a side they are closely matched with. Four wickets in four balls by Irish Bowler Curtis Campher saw the Dutch reduced to 106, which the Irish chased with five overs to spare.

In what could be a tense encounter, the Netherlands are the match favourites at 1.50, with Namibia the slight underdogs at 2.63.

Namibia had potentially the most challenging opening assignment of any side in the World Cup. They took on a Sri Lanka side who have aspirations of going far in the tournament.

Namibia, while batting, couldn't get going, losing wickets in regular clusters with only Gerhard Erasmus and Craig Williams offering any sort of resistance, scoring 20 and 29, respectively. They ended up posting a total of just 96, which was never going to be enough to beat this Sri Lankan side.

Some credit must be given to the side from Africa as they never gave up and made some early in-roads to the Sri Lankan batting lineup, reducing the Sri Lankans to 26/3. Strike bowler Reuben Trumpelman was the pick of the bowlers for Namibia, and more will be needed from him if they are to cause an upset and beat the Netherlands.

The Netherlands will be really disappointed in their defeat to Ireland. In what was a contest between two sides who will most likely be battling it out for second place behind Sri Lanka, it was a pivotal match for both. The match turned on its head when the Netherlands, who were going along nicely at 51/2, lost four wickets in four balls to find themselves at 51 for six in the blink of an eye.

After losing four wickets in such quick succession, the Dutch were clearly rocked and could only limp towards a total of 110. Ireland's strength is their batting, and they reached the low total with five overs to go. The Dutch kept fighting, and the wickets were shared amongst Brandon Glover, Pieter Seelaar, and Fred Klassen.

With two fragile-looking batting lineups, bowling will be key in this game, and the Dutch will look towards quick bowler Brandon Glover to give them an advantage. Glover is priced at 2.63 to claim over 1.5 match wickets, and with the Dutch looking to claim early wickets, that could be one of the better bets of the game.

This contest will take place in Abu Dhabi at the Zayed Sports City Stadium. This stadium is one of the better pitches in the UAE for allowing the ball to come onto the bat, and the scoring has been higher here than in other stadiums being used in this World Cup.

Betting Predictions for Namibia vs Netherlands

Now let's take a look at a few important betting predictions for Namibia vs Netherlands:

The two sides met back in 2019 in the qualifiers of this tournament, and the Netherlands were the winners by 44 runs.

Usually, you would back the Netherlands to win this match 9 times out of 10, but this is a high-pressure match where anything can happen. The Dutch are definitely the more established side and have a wealth of experience on their side. They will be so disappointed in losing to Ireland and will realistically need to win both remaining matches to have any shot of qualifying for the Super 12 phase. We think the Dutch recovery will start here as they have the recent victory to draw upon and should have enough talent and experience to win this tricky-looking contest.

Place a bet on Bet365 and get a welcome bonus of up to Rs. 4,000 if you bet on the Netherlands to win in Namibia vs Netherlands T20 World Cup.

Place a bet on Betway and get a 100% welcome bonus of up to Rs. 2,500 if you bet on the toss outcome in Namibia vs Netherlands T20 World Cup.

It says something about how poor the Dutch were in their first match against Ireland that they fell for a total of 110, with Max O'Dowd scoring 51 of those runs. Despite the madness going on around him, O'Dowd, who opened the batting for the Netherlands, scored a measured 51 off 46 deliveries.

O'Dowd looked at home on the surface, and had he not been required to chase a big total by himself, he could have gone on to make a big score. In games like these, we always think it makes sense to side with the batsman in form, and following match 1, O'Dowd is definitely that man. Priced at odds of 3.50 to be his team's top scorer, we are hoping that he can continue where he left off in the first match.

Place a bet on 1xbet by registering with the code 1BETINDIA1 and get a 130% bonus of up to Rs. 13,000 if you bet on Max O'Dowd to be Netherlands' top batsman in Namibia vs Netherlands T20 World Cup.