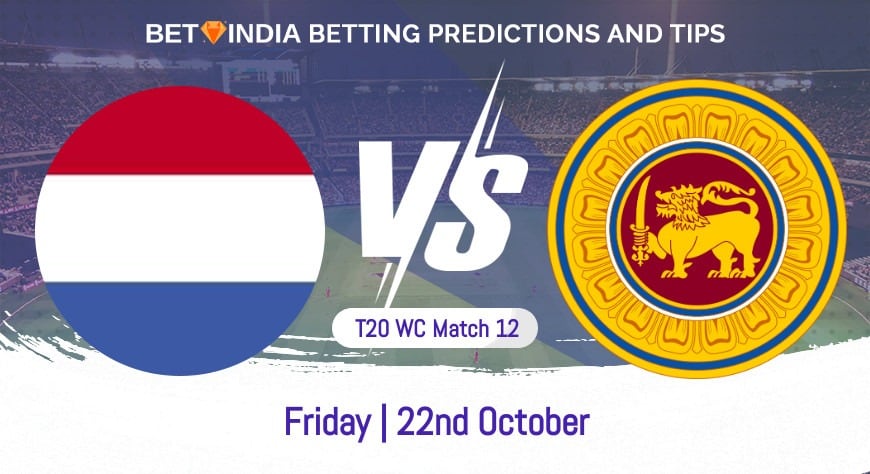 The final group match of round 1 sees two sides who have trended in different directions take on each other in Netherlands vs Sri Lanka.

Sri Lanka have easily been the best side in this year's round 1; they have dispatched both Namibia and Ireland in the two games they have played so far, being the first team out of both groups to qualify for the Super 12 phase of the tournament.

With bigger fish to fry, Sri Lanka now have the opportunity to rest some of their big names for this game to give those in the squad who haven't had much time in the middle an opportunity of some valuable match practice.

Sri Lanka, as you would expect, are the heavy favourites for the match priced at 1.14. The Netherlands can be backed at a price of 5.50.

Team News for the Netherlands

The Netherlands came into this tournament full of hope and expectation, with many pundits expecting the Irish and Dutch to battle it out for the second spot in the group behind Sri Lanka. It simply hasn't happened as the Dutch have just failed to score the volume of runs needed to stay competitive. Becoming the first side in the group to be eliminated, they will want to end their tournament on a high note.

One man who has played well for the Netherlands has been Max O'Dowd, who has scored 70 and 51 in his two innings, becoming the top scorer in round 1 as well as for his team. For O'Dowd to continue his excellent form and be the Netherland's top scorer for the third successive game, he is priced at 3.00.

Sri Lanka's management has already discussed how they want to win all three group games to head into the Super 12 phase with as much momentum as possible. The Sri Lankans have looked a class apart in their two games so far, but there will be a slight concern over the form of Sri Lanka's top 3, who all failed to get a big score in their last match. Ireland's bowlers did an excellent job of restricting Sri Lanka to 8/3, and a shock looked on the cards.

The game turned thanks to the brilliance of Winandu Hasaranga, who scored a magnificent  71 off just 47 balls, which helped take the team total up to 171. Hasaranga showed that he is one of the top players in the world in all T20, and for him to be the team's highest scorer, he is priced at 9.00, which looks like an attractive price.

This contest will take place in Sharjah. This stadium is one of the better pitches in the UAE for allowing the ball to come onto the bat. The scoring is expected to be higher here than in other stadiums being used in this World Cup.

Let's take a look at a few important betting predictions for Netherlands vs Sri Lanka:

It's very hard not to see Sri Lanka winning this game and winning comfortably. The conditions look perfect for the team that has had such a good pedigree in this tournament.

The Netherlands just haven't got to grips with the slow and spinning surfaces, and their batting has been a real challenge. The fear is that the Dutch will come up against a higher calibre of spin bowling they have yet to face, and the struggles could continue.

One argument that the Sri Lankans are putting to bed is their reliance on their openers and lack of power hitters. As demonstrated in the last match, the all-rounders and tail contributed the majority of the runs. It shows that Sri Lanka has a side that can score runs through the innings, making them a real force in the tournament moving forward.

As we indicated earlier in this preview, Sri Lanka's top three will want to score some runs after failing against Ireland.

One man who will want to get stuck into the Netherlands bowling is Kusal Perera. Perera is a class player but has only scored 11 runs in his first two innings so far. Perera averages just over 27 across his international T20 career, and he will be desperate to score some runs ahead of the Super 12 phase. We are backing him to come good in this match. His odds of 3.40 could represent some real value.

Place a bet on 1xbet by registering with the code 1BETINDIA1 and get a 130% bonus of up to Rs. 13,000 if you bet on Kusal Perera to be Sri Lanka's top batsman in Netherlands vs Sri Lanka T20 World Cup.