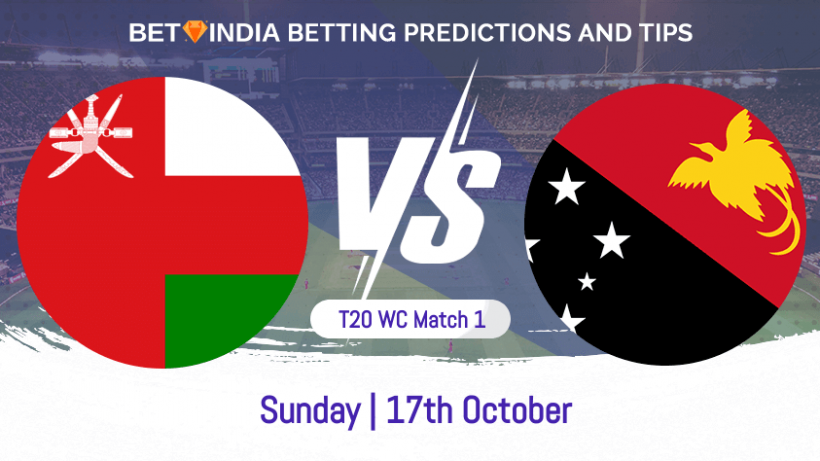 It's been five long years since Carlos Braithwaite famously dispatched Ben Stokes for four successive sixes to win the 2016 T20 World Cup for the West Indies. The 2020 edition was due to be held in Australia last year, but due to COVID, the tournament got postponed. This year's tournament was to be held in India but has now been moved to the U.A.E. and Oman.

The tournament starts on the 17th of October with Oman vs P.N.G. Oman are the heavy favourites and are priced at 1.20 to kick off their tournament with a win.

Oman are playing this game on home soil at the Al Amerat Cricket Ground in Muscat. Oman enter the tournament ranked 18th in the world and are playing in this year's tournament thanks to qualifying back in 2019. They grabbed the 6th and final spot in the qualifiers, and this is their second T20 World Cup, with their debut coming back in 2016, where they managed to beat Ireland to cause a shock.

Like many of the emerging nations, COVID has caused many problems for Oman, and since the qualifiers back in 2019, the team has only managed to play two matches, losing both to a far superior Sri Lankan side.

Oman will be the oldest side at this year's T20 World Cup, with an average age of 32. The Oman bowling attack in the qualifiers was one of the most economical, with all of their front-line bowlers averaging under 7 runs an over. Their star bowler is Bilal Khan, who will be bowled at the start and end of the innings. Priced at 2.20 to take over 1.5 wickets, backing Khan to take at least a couple of wickets against a rusty P.N.G. batting side could be a wise bet.

P.N.G. qualified for the tournament thanks to their second spot performance in the tournament qualifiers back in 2019. They turned heads, beating nations such as the Netherlands and Namibia.

For P.N.G. to continue making shocks, much hope will rest on their opening batsmen, captain Assad Vala and Tony Ura. Vala is as explosive as they come and will be looking to dominate the bowlers right from the outset. Ura has a touch more class about him and is the island's first-ever T2o centurion.

Considering Vala's power, odds of 1.83 for him to hit over 2.5 fours looks like a bet with potential, as do the odds of Ura to hit a half-century which is attractively priced at 5.00.

On the bowling front, P.N.G. will rely on left-arm quick Nosaina Pokana, who in his young T20 career has an impressive economy rate of 5.7 an over, and Norman Vanua, who took a hat-trick in the Qualifiers. P.N.G. will rely on Vanua to make the breakthroughs, and odds of 2.38 for Vanua to take over 1.5 wickets look generous.

Betting Predictions for Oman vs P.N.G.

Now let's take a look at a few important betting predictions for Oman vs P.N.G.

P.N.G. head into this match ranked higher than their opponents but are desperately short of match practice and will be playing Oman in their own backyard. However, considering what is at stake for both sides, we don't think the margins of the odds should be as large as they currently are. Oman are 1.28 to win, whereas P.N.G. are long shots at 4.50.

Playing in a stadium they know, backed by the home support and in conditions that will suit them, the smart money has to be on Oman to win, however at such skinny odds; there is very little value to be had, so for this match, a small play on the underdogs is how we are going to bet.

Either team to win the toss can be backed at 1.91. On a pitch that should offer something to both batsmen and bowlers, the team that wins the toss will be looking to chase as the ground seems to favour the chasing team heavily. For the team that bats first, the average score in the first innings is 149, so anything over this will be tough to chase.

We mentioned them at the start of the article, but the glue that holds the P.N.G. batting line up together are their openers, Assad Vala and Tony Ura. Ura can be the classier of the two, and he is the only man in the P.N.G. lineup who can boast of a T20 century. He is the overwhelming favourite to be his team's top scorer at 3.00, and considering his class compared to most of his teammates; it makes sense to back him to be the side's top run-scorer.