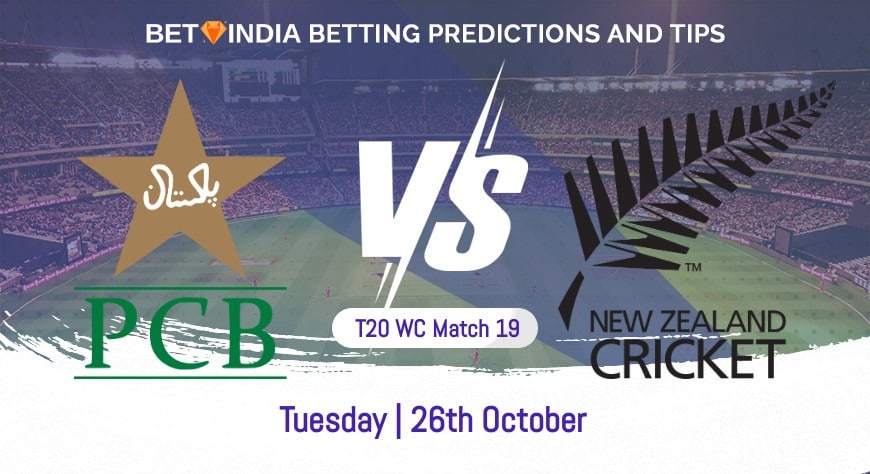 After crushing their arch-rivals India by 10 wickets, Pakistan is now all set to take on New Zealand in the T20 World Cup at Sharjah Cricket Stadium on 26th October. Their massive victory against India has made Pakistan a favourite for this game. However, it's a different venue, different pitch, and different opposition. It will be a test for Pakistan against this New Zealand side, who have an arsenal of big hitters when it comes to T20s.

There shouldn't be any surprise inclusions in the Pakistan team. They finally broke the jinx against India of a twelve-match losing streak in the World Cups. Skipper Babar Azam will continue to open with wicket-keeper Mohammad Rizwan. The duo didn't give any room to opposition bowlers in their first game in their third 150 plus stand of 2021. The cover drives from the skipper and the classy pull shots from Rizwan were the bullet points of their victory. No doubt, these two will create chaos for the New Zealand Team.

Afridi! What a night the pacer had. Pakistan will be rooting for their premium fast bowler to take the stage once again to clean the top order of the Kiwis. Three big wickets against India must have boosted the morale of Shaheen Shah Afridi to take the lead with Hasan Ali and Haris Rauf. The spinners did a fabulous job for Pakistan by restricting Indian batters from playing freely. With a pitch like Sharjah, Imad Wasim and Shadab Khan will be the players to look out for.

Babar Azam and Shaheen Afridi will be the key players from the Pakistan side who are priced at 2.87 and 3.00 in their departments, respectively, by Bet365.

After losing both practice games, New Zealand have a tall task to get back on their feet. They have a concern over the fitness of their skipper Kane Williamson, who missed the second practice game due to a flared elbow. Though management has made it clear that Williamson will be playing all Super-12 matches, it will be interesting to see how New Zealand manages their skipper's workload throughout the tournament.

Martin Guptill and Devon Conway will open the innings for New Zealand with support from Tim Seifert in the top order. Lockie Ferguson and Trent Boult, who had great success in the IPL this season, can put pressure on Pakistan with their familiarity with the UAE pitches. New Zealand should play Mitchell Santner and Ish Sodhi on this spin-friendly pitch.

Martin Guptill and Trent Boult are bookies favourites from the New Zealand Camp with prices set at 3.75 and 3.5 respectively at Bet365.

It is not a piece of news for the fans who have followed the IPL 2021 that the Sharjah pitch is heaven for the spinners. The pitch has become slower, and the batters are finding it difficult to open their arms except on a few occasions. Afghanistan spin duo of Rashid and Mujeeb took 9 of 10 wickets in the earlier game to show the help spinners are receiving from the pitch. It won't be a surprise if both teams decide to play an extra spinner tomorrow.
The weather will be clear, with the temperature around 25 degrees. The winds will be between 10 to 15 km/h.

Let's take a look at a few important betting predictions for Pakistan vs New Zealand:

A thumping victory over India has made bookies choose Pakistan over New Zealand to win the game. You can't unsee the record between these two teams in UAE. Pakistan have won 6 out of 7 games played against New Zealand in UAE. This makes Pakistan's chances of winning higher than the Kiwis. The last time these two sides met at Napier exactly 308 days back, Mohammad Rizwan scored 89 off 59 deliveries to hand over a loss to New Zealand. His unbeaten 79 against India should give New Zealand nightmares before the game.

And if you are still having some ‘negative thoughts' about the prediction, let us tell you that Pakistan have won all of their last 12 games in UAE since 2016.

Out of 17 matches played at Sharjah, the team batting first has defended the target 10 times. But the last few results show some different scenarios. In six of the last eight games played here, including 4 from IPL and 4 from the ongoing T20 World Cup, the team batting second has won. Therefore, the team winning the toss should field first. Both teams have been priced at 1.90 to win the toss.

The World number 2 T20 batsman and the Pakistan Skipper, Babar Azam, is on the top of the list for the bookies as the top batsman from the Pakistan side. Babar scored an unbeaten 68 runs against India off 52 deliveries with six boundaries and two sixes. Known as a very good player against spin, Babar will play a crucial role at Sharjah. He has an average of 47 against New Zealand in T20s.

Place a bet on 1xbet by registering with the code 1BETINDIA1 and get a 130% bonus of up to Rs. 13,000 if you bet on Babar Azam to be Pakistan's top batsman in Pakistan vs New Zealand T20 World Cup.