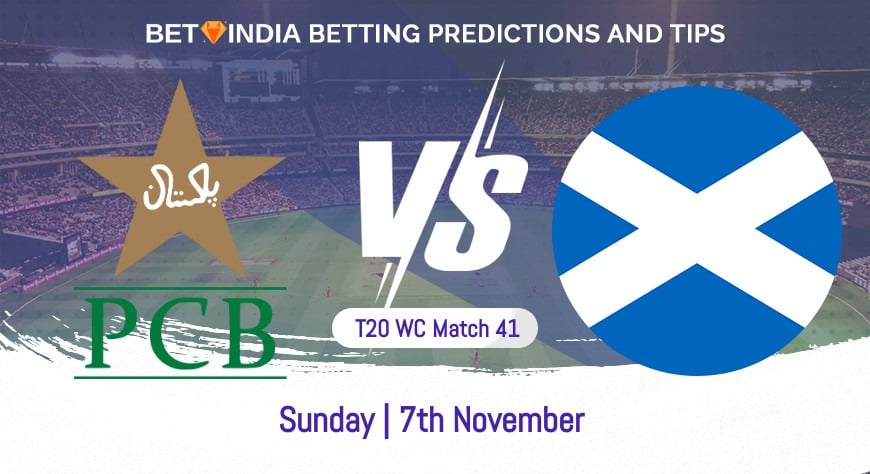 Pakistan have had a few days of deserved rest following their exploits earlier in the tournament. Pakistan were the first side to qualify for the semi-finals and, barring a strange turn of events, should top their Super 12 group. They are likely to play either Australia or South Africa in the semi-finals.

For Scotland, this final contest brings the curtain down on what has been a fabulous tournament for the minnows. Getting into the tournament itself was deemed a success; qualifying for the Super 12s by topping the group and beating Bangladesh will go down in Scottish cricket folklore.

Scotland have shown against classier opposition that they are not a side to be taken lightly, and they will be doing all they can to go out with a bang here. The Scots to pull off the upset are priced at 13.00, while Pakistan are priced at 1.04 to make it a clean sweep of victories.

Pakistan and England have been the two standout sides, and it's only right that both of those sides look like they will top their respective groups. The two could be on a collision course for a mouth-watering final, but Pakistan have one more Super 12 game to negotiate against Scotland before any of that. Pakistan had one of the busier schedules playing India, New Zealand, Afghanistan, and Namibia in barely over a week and a half, so Babar Azam's side would have appreciated the rest they have had.

Last time out, Pakistan beat a tough Namibian outfit by 45 runs. Put in to bat first; the world-class opening duo of Babar Azam and Mohammed Rizwan won the game for Pakistan, putting on a 113 run opening partnership. Both players have been in fine form this tournament and are a huge reason why Pakistan have been as successful as they have. If Pakistan are asked to open the batting, we won't put it past either one to score a century. For a century to be scored, you can get odds of 10.00, which could be a great way to play in this game where value could be hard to find.

Perhaps the toll of playing seven games in a little over two weeks is catching up with Scotland as they were blown away by a class Indian side.

Put into bat by Indian captain Virat Kohli, the Scottish batsman were all at sea and couldn't cope with the accuracy of Mohammed Shami, Jasprit Bumrah, or the spin of Ravi Jadeja. Being bowled out for just 85, the Indians reached their total with 13 overs to go. The win would have done wonders for the Indian net run rate but might have damaged Scotland's confidence ahead of this final match.

One man who has shown himself to be able to operate efficiently at this level is opening batsman George Munsey. Munsey was the top-scoring batsman in round 1, and he has looked comfortable when facing the best. His 24 off 19 balls was head and shoulders above his teammates, and Munsey won't be intimidated by what he is about to face here. Odds of 3.75 to be Scotland's top run-scorer could be a worthwhile bet.

This match will be held in Sharjah.

On a deck that should aid spin bowling, it should offer a significant advantage to Pakistan's spinners, making it a long day at the office for Scotland.

Betting Predictions for Pakistan vs Scotland

Let's take a look at a few important betting predictions for Pakistan vs Scotland:

It's impossible to think that Pakistan won't dominate this matchup, and their odds of 1.04 will make them the shortest price favourites in any game held in this World Cup so far.

Pakistan and England have been the two standout teams, and every phase of Pakistan's game is just clicking. The only way Pakistan will lose this game is if they beat themselves or become complacent.

From a team line-up point of view, it will be interesting to see if they rest some players for this clash or whether they stick with the same playing 11 that have been so dominant in this tournament.

Scotland will fight, and they do have some players who can compete and perform well at this level, but the victory will fall to Pakistan and will set them up perfectly for the bigger challenges to come.

At the top of this preview, we highlighted the dangers that both Mohammad Rizwan and Babar Azam possess. Both are wonderful players, but we are going to side with Rizwan to score the most runs here for his side.

While both have been in amongst the runs, Rizwan has looked the more fluid of the two, and he has shown his class and variety of shots on a more frequent basis. Rizwan is one of the best T20 batsmen in all of the world, and the odds for him to be his side's top scorer are 3.25, which could provide some brilliant value.

Place a bet on 1xbet by registering with the code 1BETINDIA1 and get a 130% bonus of up to Rs. 13,000 if you bet on Mohammad Rizwan to be Pakistan's top batsman in Pakistan vs Scotland T20 World Cup.