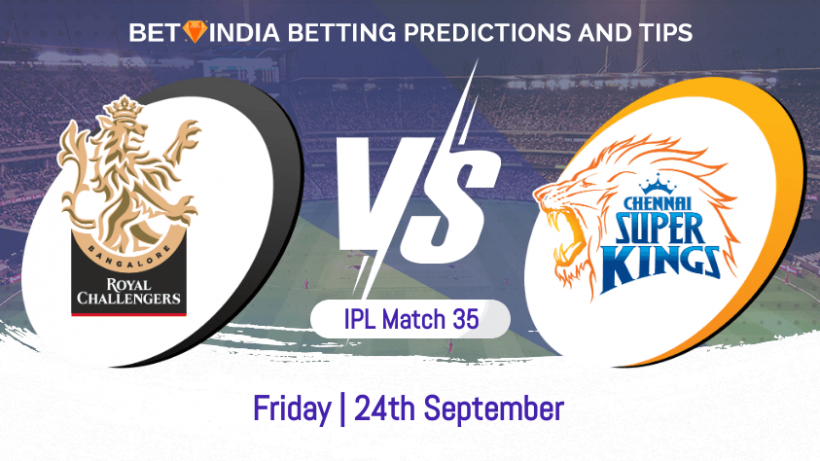 RCB got off to a fantastic start in this year's tournament, winning five of their first six matches, but their campaign has recently threatened to go off the rails as they have lost their last two fixtures to the Punjab Kings and the Kolkata Knight Riders. The Super Kings are flying high with six wins in their eight matches played so far, including a win after the resumption against the Mumbai Indians. Victory for RCB will see them halt their slide down the table, whereas a win for Chennai will see them strengthen their grip at the top.

If you are new to cricket betting, reading this piece on How to Learn Cricket Betting might be helpful for you.

Royal Challengers Bangalore will be looking for an immediate bounce back following a crushing defeat to the Kolkata Knight Riders. Against Kolkata, RCB were bowled out for a dismal 92, and the Knight Riders chased the total with ten overs to spare. The pressure is well and truly on the big names like Kohli, Maxwell, de Villiers, and Hasaranga. They all will need to perform against a Super Kings team in breathtaking form.

The Chennai Super Kings are in sparkling form, winning six of their eight matches so far this season, including a resounding 20 run victory over the Mumbai Indians in their previous outing. The stars of the show were Dwayne Bravo, with the West Indian veteran claiming three wickets, and batsman Ruturaj Gaikwad, who scored an unbeaten 88 off just 58 balls. Along with the Delhi Capitals, Chennai lead the way sitting at the top of the table with 12 points. Victory in this match will go a long way to ensuring the Super Kings lock down a playoff spot.

The match is due to be held in Sharjah, and the weather for the game looks perfect. The pitch at Sharjah can be challenging for bowlers as the pitch can sometimes be lifeless, and batters have been able to score effectively. Look for the team that wins the toss to put a total on the board and give the opposing team a difficult score to chase.

In a match-up that includes some of the world's biggest cricketing names, this could be a match for the ages. Chennai Super Kings are the favourites for the match and can be backed at 1.73, with the Challengers priced as slight underdogs at 2.10.

In a team that contains superstars such as Virat Kohli, AB de Villiers, and Glen Maxwell, it's very hard to back against the Challengers when they find themselves in a must-win position. In a game that could go either way, we are going to back the underdogs, the Challengers, at the slightly higher price.

Either team to win the toss can be backed at 1.91. On a pitch that doesn't give the bowlers too much help, Sharjah has seen IPL teams successfully post scores of 200+. Look for the team that wins the toss to bat first so that they can try and put a competitive score on the board. With the pitch slowing and wearing down as the game goes on, batting in the second innings could be a very tricky proposition.

Place a bet on Betway and get a 100% welcome bonus of up to Rs. 2,500 if you bet on toss outcome in Royal Challengers Bangalore vs Chennai Super Kings 35th Match IPL 2021.

In a match in which the Challengers really need to win, it would be obvious to look at Virat Kohli to score the most runs for the team. However, he isn't in great form, and so we will look elsewhere for some value. AB de Villiers has been in fine form for the challengers for the majority of the IPL season, scoring totals of 75+ twice in his eight innings. At odds of 4.33, he is a good bet to be his team's highest scorer.

Place a bet on 1xbet by registering with the code 1BETINDIA1 and get a 130% bonus of up to Rs. 13,000 if you bet on AB de Villiers to be RCB's top batsman in Royal Challengers Bangalore vs Chennai Super Kings 35th Match IPL 2021.

1xBet is offering a special offer for all its players for this pivotal ‘Royal Challengers – Super Kings' match. In this “Risk-Free Bet” offer, if you place a bet on the correct score of the game and you end up losing, 1xBet will provide you with a free bet of up to 1500 INR. To claim this offer, register on 1xBet with the code 1BETINDIA1 now and also get a 130% bonus of up to Rs. 13,000.