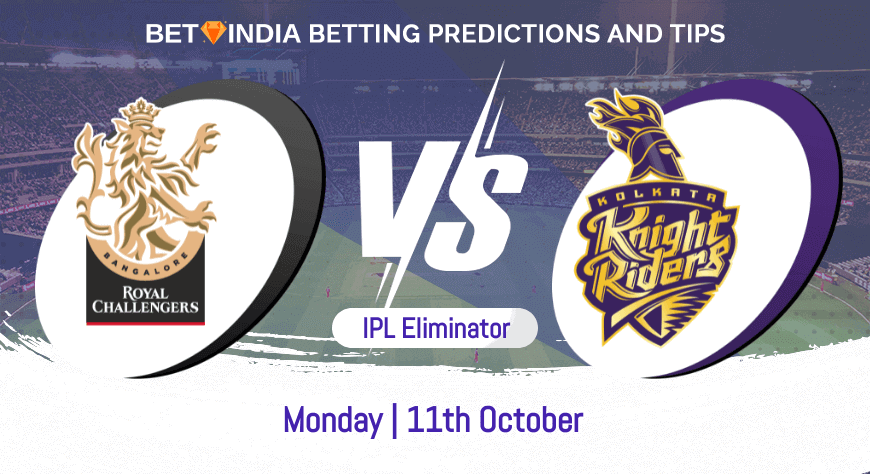 After several intense and exciting weeks, the Kolkata Knight Riders won the race between four teams to win the final playoff spot and qualify for the eliminator of the 2021 IPL season. Their reward is a match against Royal Challengers Bangalore, who finished off the group stage in fine style, winning four of their last five and finishing third in the table.

So now the eliminator of IPL 2021 will be ‘Royal Challengers Bangalore vs Kolkata Knight Riders'. The loser of this match will get eliminated and their season will be over; for the victor, they will move one step closer to the IPL final and will take on the loser of the first playoff between the Delhi Capitals and Chennai Super Kings.

RCB are looking to make history and win their first IPL title after finishing runners-up on three separate occasions. For the Knight Riders, they are looking to add to the titles they won back in 2012 and 2014.

In the two group matches that the teams played this season, the honours were split. RCB won the first meeting by 38 runs before the Knight Riders got their revenge in the second match, winning by 9 wickets.

RCB head into this elimination match as the form side in the whole of the competition, thanks to victories in four of their last five matches. RCB were actually very unlucky not to finish in the top two, finishing behind a stuttering Chennai Super Kings only because of net run rate. They will be pleased with how they finished the group stage, particularly after they experienced a mid-season wobble that had them potentially missing out on a playoff spot altogether, thanks to a period where they lost three in a row and four out of five matches.

The key to RCB's' form has been their batting. On pitches that have been sticky and slow, batting hasn't' been easy, and some sides have really struggled during the second phase of the competition. In the four matches they recently won, RCB were able to score totals of 150+ each time, which on these pitches has been a tough total to chase.

Glenn Maxwell and Devdutt Padikkal have been the stars, with both finishing inside the top ten for most runs scored within the group stage. With the ball, Harshal Patel has been the main man, finishing as the group stages' overall leader in wickets, with 30 across the 14 matches.

In what is bound to be a tight and tense affair, RCB will need all three to continue to fire if RCB are to advance to the next stage.

Heading into this match, the Knight Riders might have a bit of an edge over their opponents due to the fact that they were involved in a four-team race to secure the fourth and final playoff berth. The Knight Riders won three of their last four, proving they could handle the heat and pressure, edging out the defending champions, the Mumbai Indians, to the final spot thanks to a superior net run rate.

The Knight Riders have suffered a season mostly full of inconsistencies, winning seven and losing seven of their fourteen group games. They will be pleased with their finish and, having adopted an elimination mindset over the last few weeks, must head into this match full of confidence.

Recent success for the Knight Riders has largely been due to the form of Rahul Tripathi and Shubman Gill, whose vital runs have helped set the platform for some decent batting scores. With the ball, Varun Chakravarthy has led the team with sixteen wickets and has been ably supported by a solid supporting cast of Lockie Ferguson, Sunil Narine, Andre Russell, and Prasidh Krishna, all of who have contributed vital wickets.

There is a big question mark over the form of Eoin Morgan, who has been in woeful form with the bat but has led his side well up to his stage; the Knight Riders will need a spark in the middle order and will hope that Morgan can find his form and provide it.

The match is due to be held at the Sharjah Cricket Stadium. With the weather set to be perfect, everything should be set up for a tense and exciting game. There have been quite a few low scores in the last few games held at Sharjah, with teams struggling to get past 140. Batting will get harder as the game goes on; the team that bats first averages 149, and the team that bats second averages 131, so there is a definite advantage to batting first.

Betting Predictions for RCB vs KKR

In a matchup where both sides have recorded recent victories over one another and have a really tight head-to-head, there aren't any surprises that the betting for the contest is really close. RCB are the slight favourites, which reflects their marginally better form entering the match; they can be backed at 1.80, with the Knight Riders being priced at 2.00.

Something seems to have clicked for RCB, as they have shown they are a complete side over the last few weeks, excelling in all three phases of the game.

So often the nearly men, RCB's recent tenacious and gritty displays are the perfect mirror image of their captain Virat Kohli. Kohli has had a rough season across all formats of the game. He has stepped down from the captaincy of the international T20 side and not scored a century in any format since 2019.

Fate has a strange way of working, and you wonder if Kohli will finally lead his side to that IPL victory that has so long been denied to him. We will back RCB to win and send the Knight Riders home in what could be a thriller.

Place a bet on Betway and get a 100% welcome bonus of up to Rs. 2,500 if you bet on toss outcome in Royal Challengers Bangalore vs Kolkata Knight Riders Eliminator IPL 2021.

Batting at the top of the order is not easy, especially when your batting partner is one of the most celebrated figures in the game, but Devdutt Padikkal has excelled in the role this season.

Padikkal finished the group stages 9th in the race for the orange cap and has posted recent scores of 41, 40, and 22. Despite a recent rare slip-up (a duck in his last match), Padikkal has shown this season he has the class and temperament to successfully send the Challengers on their way to a good total. We have a lot of confidence he will bounce back for this one. At odds of 3.75, he could represent some great value in what is a very close betting contest.

Place a bet on 1xbet by registering with the code 1BETINDIA1 and get a 130% bonus of up to Rs. 13,000 if you bet on Devdutt Padikkal to be the Challengers' top batsman in Royal Challengers Bangalore vs Kolkata Knight Riders Eliminator IPL 2021.