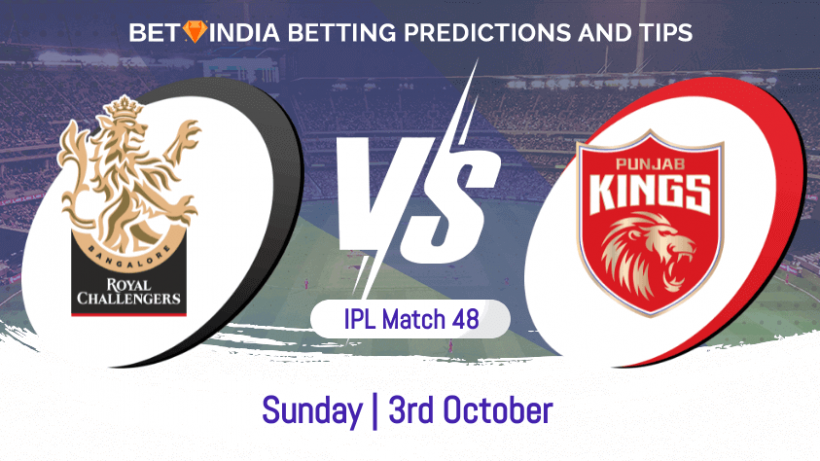 Royal Challengers have turned the tables around by registering back-to-back victories. With 7 wins now, they are in third place in the points table. A third win in a row will take them to the playoffs for successive seasons.

Bangalore’s success will be dependent on the form of Virat Kohli and Glenn Maxwell. Kohli has 2 fifty-plus scores in the last three games, while Maxwell’s cracking knock (50 off  30 balls) against Rajasthan helped them secure two crucial points. Plus, these two have 682 runs in 11 matches amongst them. They should be looking forward to wreaking havoc on Punjab’s bowling unit.

Though Yuzvendra Chahal’s dream of playing in the ICC World T20 got over after getting ignored by the selectors, he has put on a solid show with the ball in the UAE, claiming 7 wickets. Bangalore should continue playing 2 spinners, and Kyle Jamieson should come in for Daniel Christian.

Punjab Kings and close finishes are a match made in heaven. After two such encounters in their last three games, Punjab have just about kept themselves alive in the race for the playoffs. But they need to win their reaming two games and wait for others to lose. It’s the same equation again.

Punjab Kings should change their middle-order. It is clearly visible that they are not able to keep the scoreboard running after the top-order storms the opponent bowling units. Harpreet Brar should replace Deepak Hooda. In addition to that, they should send Shahrukh Khan up the order. Moises Henriques is likely to replace Nathan Elis.

Sharjah pitch has proven heaven for the pacers. The pacers get swing in the early stages of the match. On the other hand, the slower ones have been crucial in the death overs. The weather will be partly cloudy, with winds between 15 to 30 kmph.

Though Royal Challengers haven’t seen a victory against the Kings in their last three matches, they have far better form than Punjab this season and should easily win this match against Punjab Kings. Their batting-order depth and lethal bowling attack, inclusive of the leading wicket-taker Harshal Patel (26 wickets), should be enough to overpower the Punjab side. The stats clearly show that both Punjab openers have averaged more than 45, but the remaining 9 batters are well below 25. Royal Challengers should exploit the poor record of Punjab’s batting order to come out with flying colours.

Teams chasing the target have won four of the last five outings. Without a doubt, the team winning the toss should bowl first here.

Place a bet on Betway and get a 100% welcome bonus of up to Rs. 2,500 if you bet on toss outcome in Royal Challengers Bangalore vs Punjab Kings 48th Match IPL 2021.

Royal Challengers Bangalore's Skipper Virat Kohli should be the top batsman against Punjab Kings. After all, he is in sublime form. The opener for Bangalore has scored 2 fifties in the last three innings. Overall, he has 8 fifty-plus scores in his last 12 innings. Kohli has been able to convert his slow starts into big scores. He is back in control of his cover drives, which means that Punjab should be worried about him.