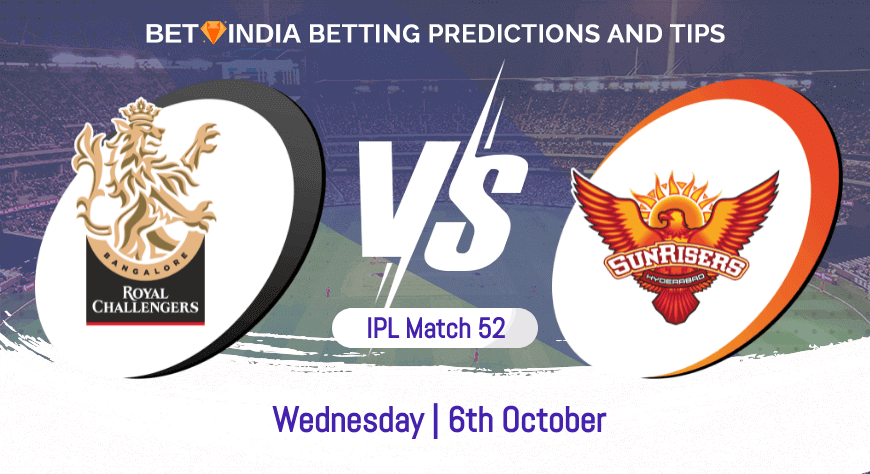 The qualifiers for the 2021 IPL are just around the corner, and we are now entering the final few matches of the group stage. On Wednesday, 6th October we have Royal Challengers Bangalore vs Sunrisers Hyderabad 52nd Match IPL 2021.

In what is technically a dead rubber with RCB already qualified for the playoffs and the Sunrisers eliminated from playoff contention, there is still plenty on the line for both sides. RCB could still finish top of the table if results were to go their way, giving them a slightly easier route to the final; for the Sunrisers, they are playing for pride. Even if they were to win their last two remaining games, the Sunrisers are guaranteed to finish bottom, but they will want to end a troubled campaign on a positive note.

When these sides meet, it is often close, with RCB winning three of the last five and the Sunrisers the other two. Despite nothing really resting on the outcome of the match, both sides will be doing their best to beat the other.

If you are new to cricket betting, reading this piece on How to Bet on Cricket? might be helpful.

Royal Challengers Bangalore have really found their groove in recent weeks and head into this match full of confidence following three successive victories over the Mumbai Indians, Rajasthan Royals, and Punjab Kings. Having booked their playoff place, RCB can look back at the last few weeks with real satisfaction after surviving a mid-season wobble. Rewind a few weeks, and things weren’t looking so rosy after RCB went through a period of only winning one match in five games, leaving their qualification hopes hanging in the balance.

RCB’s big players have really stepped up in recent matches, with Virat Kohli, Yuzvendra Chahal, and Glenn Maxwell all stepping up with big performances with the bat and ball. They face a dilemma in this match, and the RCB management will need to get it right, as RCB need to decide whether they rest some of their key men ahead of the bigger matches that are on the horizon or do they continue to play their best eleven in the hope that they have as much momentum as possible heading into the playoffs. RCB have yet to taste IPL success, finishing runner up on three different occasions. To win it all, RCB are currently priced at 4.50.

For so long, they have been one of the dominant forces of the IPL, but this season has been a nightmare for the Sunrisers Hyderabad, who will finish bottom of the table in this year’s competition. This will be the first time that the Sunrisers would have failed to qualify for the playoffs in five seasons.

With just two wins all season, much of the criticism fell at the doorstep of captain David Warner, who was subsequently dropped, but even with the pugnacious batsman out of the lineup, results have still been poor. Despite clocking this year's fastest delivery thanks to Umran Malik’s 151 kph ball against Kolkata, bowling has been a problem for the Sunrisers with a lack of pace from their seamers being a clear weak link. The introduction of Malik brought much-needed improvement, but it’s a move that should have happened earlier in the season.

The match is due to be held at the Sheikh Zayed Stadium in Abu Dhabi. With the weather set to be perfect, everything should be set up for a great game. The pitch in Abu Dhabi has got better as the tournament has gone on, but batting is still a challenge. In all of the matches held here in the IPL, the team that bats first averages 140, whereas the team that bats second averages 129. Based on this, look for the team that wins the toss to bat first and make the most of the better batting conditions.

Considering how badly out of form the Sunrisers have been this season and the fact that they might experiment with their starting lineup, it’s not surprising to see that the Challengers are the strong favourites for a victory. The Challengers can be backed at 1.50, with the Sunrisers priced at 2.63.

As stated at the top of the preview, depending on results, RCB could still finish top, so although they could make some changes, we expect RCB to go with a strong lineup here. Momentum is a wonderful thing, and after a tricky spell, RCB certainly have it. The Challengers will want to keep winning with big matches to come, and it’s hard to see beyond any other result here.

Place a bet on Betway and get a 100% welcome bonus of up to Rs. 2,500 if you bet on toss outcome in Royal Challengers Bangalore vs Sunrisers Hyderabad 52nd Match IPL 2021.

RCB have found some much-needed solidity in their batting, with Glenn Maxwell posting some recent good scores. The Aussie is priced at 5.00 to continue his recent good form and could be the way to bet here.

Place a bet on 1xbet by registering with the code 1BETINDIA1 and get a 130% bonus of up to Rs. 13,000 if you bet on Glenn Maxwell to be RCB's top batsman in Royal Challengers Bangalore vs Sunrisers Hyderabad 52nd Match IPL 2021.