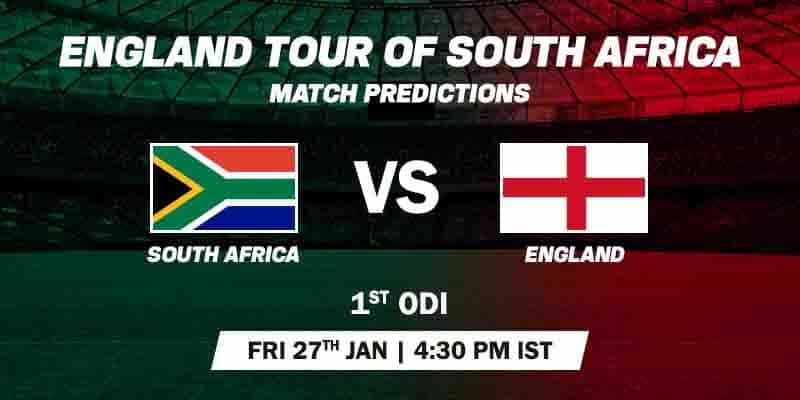 The SA20 cricket league will be on a break because of England’s tour to South Africa for a three-match ODI series and a two-match Test series. The first ODI is scheduled to take place on Friday, 27th January at Mangaung Oval.

South Africa are coming to play against England after a Test series loss at home against Australia and England is coming after dominating Pakistan in the Test format on Pakistani pitches.

South Africa has witnessed a major dip in their overall performance when it comes to the limited over format. In ICC Men's Cricket World Cup Super League, South Africa stands in 11th position with 59 points.

England has seen an uprising in the limited-over format of cricket but they are still turning out to be a weaker team in the ODI format. With 125 points, England are currently at the 4th spot in the ICC Men's Cricket World Cup Super League. And according to online bookies – visitors are the favourite for this series.

Temba Bavuma will be leading the side again and the player has shown some positive signs in his performance. He will be motivated to take the team in a better position after the ICC T20 World Cup tournament's early exit. Sisanda Magala and Marco Jansen are making their way back to the ODI format and their presence will be a huge boost to the pace attack with Kagiso Rabada, Lungi Ngidi and Anrich Nortje on their side.

South Africa will have the services of all the best possible players. Their line-up could look like this:

The biggest boost for the English squad is the comeback of Jofra Archer in the bowling squad. The player is a crucial contributor to the team and he was out of action for more than a year due to a career-threatening injury. Harry Brook will be making his ODI debut against South Africa and Ben Duckett has been named in the squad after an impressive Test series against Pakistan. England will be under the leadership of Jos Buttler and he will be motivated to improve the overall performance of the team before the ICC World Cup.

England will have Harry Brook and Jofra Archer in their starting XI. This is how they could field their players tomorrow:

Both teams are evenly matched when it comes to the ODI format. We are in for an absolute thriller but we predict England’s win in the first ODI.

England will register a win as they have a strong squad.

Jofra Archer to pick up over 3 wickets.