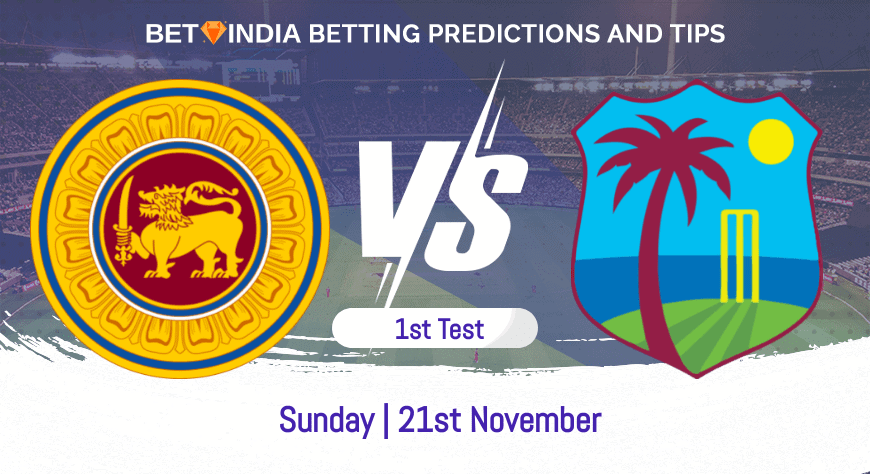 Two sides who are looking to bounce back following a difficult World Cup campaign meet in the first official match of the new 2021-2023 World Test Championship. The Test Championship is in its second iteration after New Zealand won the first edition beating India in a rain delayed final in England.

These sides occupied two of the final three spots in the standings finishing a disappointing 8th and 9th respectively. This is a crucial opportunity to secure some vital points ahead of what is likely to be a tough campaign for both sides.

The first of two test matches will be played in Galle, and home advantage makes Sri Lanka the heavy bookies favourite at 1.80. West Indies are priced at 6.00.

The two sides will lock horns again in test cricket after having done so earlier in the year. Playing in the West Indies, the sides played out a 0-0 series after two test matches were drawn.

Now back in Sri Lanka, Sri Lanka will be hoping for a win on home soil in what is Head Coach Mickey Arthur’s last series in charge, before he heads off to Derbyshire.

The West Indies have never won a series away in Sri Lanka and Sri Lanka will be hoping to keep it that way. The Sri Lankan side contains a blend of experience and youth with a lot of expectation resting on both Angelo Mathews and captain Dimuth Karunaratne.

Karunaratne is a fine opening batsman and he scored a century in the last test match they played against Pakistan. When these sides met earlier in the year it was bowler Suranga Lakmal who was the star of the show taking 11 wickets across the two test matches.

It’s the dawn of a new era for West Indian cricket following the retirements of Chris Gayle and Dwayne Bravo. West Indies across all formats of the game need to find consistency. Too often you simply don’t know what West Indian side is going to show up.

Their odds of 6.00 reflect that of a side who has only won two of their last fourteen tests away from home. On a spinning turning track they will need to find their A game if they are to turn that damning statistic around.

On a Galle track that is certain to spin, the West Indies have selected a trio of spin bowlers in Rahkeem Cornwall, Jomel Warrican and Veerasammy Permaul all of who could play a part here. Another key man will be Roston Chase. Chase with his spin has the ability to cause problems for the Sri Lankan batsman as well as score vital runs with the bat. He will need to play well with both bat and ball if the West Indies are to be competitive here.

The weather in Galle looks to be mixed over the next five days and their is a chance that there could be some breaks in play, particularly towards the end of the test match.

Galle is a pitch that offers almost immediate turn and as the test match goes on, look for spin to take over. Both sides will choose a side that is packed with spin options and the majority of wickets that will fall will be because of spin.

Look for the side that wins the toss to bat first and make the most out of the better batting conditions. Batting last on a turning track could be very hard indeed!

Let's take a look at a few important betting predictions for Sri Lanka vs West Indies:

For both of these sides they have both spent too long in the wilderness when it comes to Test cricket. After a poor first showing in the first World Test Championship, these sides will want to make amends and get the new campaign off to the best start possible.

Its easy to see why Sri Lanka are the heavy favourites to win this match because of the West Indies horrific away form, but Galle hasn’t been a happy hunting ground recently for the home side, who have lost to both England and New Zealand in recent test matches played at the venue. Sri Lanka did beat the West Indies when they last played a test match against each other at this venue.

The two sides are evenly matched and this matchup will come down to how the West Indian batsman can handle barrage of spin they are bound to face. Over recent years the West Indies have struggled against spin and you have to think Sri Lanka will have a significant advantage. We expect the home side to win but think this match will be a lot closer than people think.

Either team to win the toss can be backed at 1.91. Conditions are likely to get harder as the game goes on, so look for the side that wins the toss to bat first here as batting last on this spinning track will be very hard.

Following a successful World Cup courtesy of being Sri Lanka’s highest run scorer, Charith Asalanka has received his maiden call up to the test side and is expected to start.

The bet comes with some risks attached as it isn’t the easiest in transferring from white ball to red, but in home conditions we think Asalanka has every chance to be successful. He can handle these type of conditions and the West Indian bowlers shouldn’t hold any fear. At odds of 5.00 we think Asalanka could be a good option to be his teams top scorer and he can be backed at a decent price.

Place a bet on 1xbet by registering with the code 1BETINDIA1 and get a 130% bonus of up to Rs. 13,000 if you bet on Charith Asalanka to be Sri Lanka’s top batsman in Sri Lanka vs West Indies 1st test.