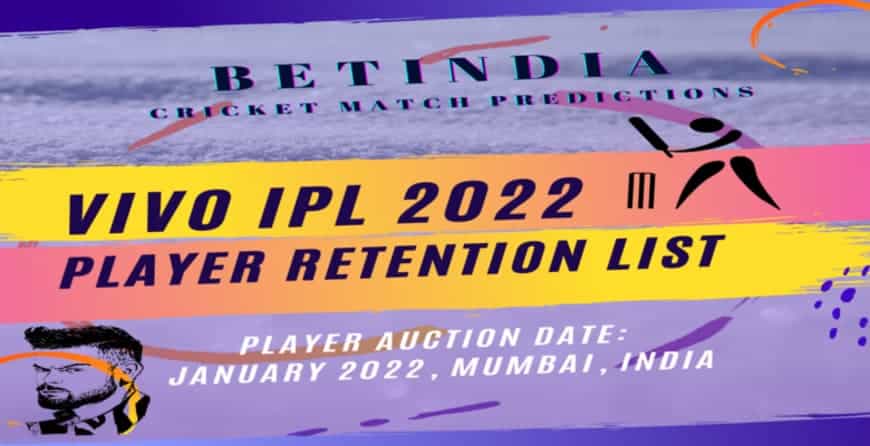 Hear! Hear! Hear! The list of major players of eight teams from the TATA IPL 2022 is out and is driving cricket fans crazy across the world. On Nov 30, 2021, the teams have released their retention list whilst sticking to the rules. When is the mega IPL auction 2022 going to happen? It will take place in early January 2022.

There is the addition of 2 new teams taking up Ahmedabad and Lucknow. The list released is creating a lot of buzz as to who goes where during the auction time. Major players were relieved resulting in low-spirits of the fans and yet the anticipation is high towards the new teams.

Get the live updates of any match including the IPL T20 on 1xbet India. The bookie has a live betting platform and cashout function to leave the punters in profits. It is one of the most engaging online betting sites with amazing odds. The registration process is quite simple with 24/7 customer support via live chat and email services. Also claim bonus offers that keep on adding during the IPL season.

As mentioned above 8 teams were retained with 27 players. With the addition of two teams, cricket lovers are going to witness more matches. It is going to be a double-round format and a 10 – team event. The old eight teams could retain 4 players each and release the list. According to the rule, the teams can keep 2 Indian players and 2 overseas players or 3 Indian players and 1 Overseas player.

The 1xbet welcome bonus for every new registration is very generous. You can win 100% of the first deposit bonus up to ₹10,000. The minimum deposit is ₹75. The money is directly credited to the gamer’s account. The bookie supports several payment methods. The best way for an Indian bettor would be through UPI or Paytm.

The new 2 teams have the chance to select the team from the released players of the eight franchises. They have time from December 1, 2021, to December 25, 2021. The teams are allotted 90 crores each to select the players. The mega auction dates are not finalized yet. It is predicted that January 2022 would be that time.

It was really a tough decision for the teams to make. Several popular and fancied players were relieved. The RCB, MI, and CSK have the same skippers. However, Punjab Kings is going to have a new captain after K L Rahul decided to get into the auction. Also, it is a big blow to the Sunriser Hyderabad fans, as the top players like Rashid Khan, Jason Holder, Jhonny Bairstow, Jason Roy, and David Warner were on not the list.

Dafabet India app brings forward a live IPL betting platform with one of the best odds in the industry. It is ranked as the most reliable platform amongst the Indian bettors. The app is available to Android and iOS devices. You can download the same from the official website or the stores like Google play store and Apple store. Dafabet apk download requires you to accept the installation from unknown sources and then you can enjoy the services.