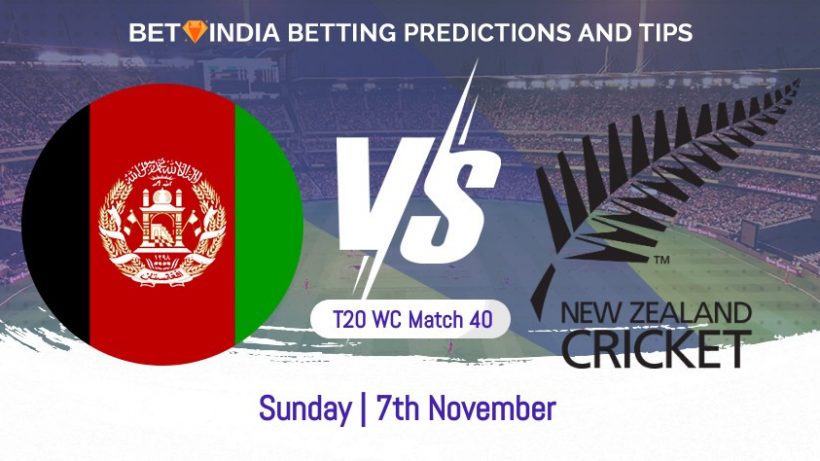 Arguably the most eagerly awaited match in this year's Super 12 phase is upon us as Afghanistan take on New Zealand. The match has many permutations, a win for New Zealand will see them qualify for the semi-finals. A win for Afghanistan brings both them and India back into qualification contention. For a short time, the Afghans will be the most supported side in the world!

Afghanistan lost their second match of the Super 12 phase when they faced the full wrath of a resurgent India. Unable to make a dent in the Indian batting lineup, India would go on to make the biggest total of this World Cup, scoring 210. Set a difficult chase, the Afghans gave it a really good go but would fall short of the total, going on to lose by 66 runs.

Afghanistan captain Mohammed Nabi top-scored for the Afghans, scoring 35 off 32 balls. The rest of the lineup couldn't quite get going, losing their wickets at vital times.

Spin will be key for the Afghans in trying to restrict the Black Caps to a low score, and they will need Rashid Khan fully firing. Khan is 2.38 to be his side's leading wicket-taker.

New Zealand, for the third consecutive game, had to overcome a challenge to win the game. Facing a spirited Namibia side, the Black Caps couldn't get going with the bat and lost Martin Guptill, Kane Williamson, and Devon Conway cheaply. Heading into the 16th over, New Zealand were 96/4 and were on course to post a total that Namibia would have fancied chasing.

Step forward Glenn Phillips and Jimmy Neesham who scored 67 in the final four overs to take the Kiwis to a final total of 163. Phillips scored 39 off 21 deliveries, with Neesham scoring 35 off 23.

Despite this match carrying several permutations, New Zealand have their own fate in their hands and know that a win here will wrap up second place in the group and a potential clash against England in the semi-finals.

Boult leads the attacking unit masterfully, and he is 3.60 to be his team's leading wicket-taker

In total, there have been 51 T20 International matches played at the stadium, with the team that bats first having won 23 times and the team that bats second 28 times. The team batting second has won on the majority of occasions at this venue in this World Cup.

Let's take a look at a few important betting predictions for Afghanistan vs New Zealand:

You could argue that this match is a quarterfinal as a defeat for both could leave them in a spot of bother and allow a lurking India team to pinch the final qualification spot. All of the pressure is on New Zealand, but as a side who have played in recent World Cup finals and won the Test Championship, it's a pressure that Kane Williamson and his men should be able to handle.

The pitch will help the Afghanistan team as they should be able to use their spinners to full effect. New Zealand will be slightly concerned that Martin Guptill aside, their top order has failed to fire against both the Scottish and Namibian bowling attacks. Against a better bowling unit in Afghanistan, a loss of early wickets could put the Kiwis in a spot of bother.

The strength of New Zealand in the last few games has been their middle order, with Glenn Phillips playing a starring role in the wins against Scotland and Namibia.

New Zealand have shown they can score big runs and do it quickly. If they can control the loss of quick wickets, they have to be the undoubted favourites for victory and, in the process, break millions of Indian and Afghan hearts.

Place a bet on Betway and get a 100% welcome bonus of up to Rs. 2,500 if you bet on the toss outcome in Afghanistan vs New Zealand T20 World Cup.

When the pressure is on, and you need a man to deliver, perhaps there is no better batter to back than Kane Williamson.

Williamson will be disappointed with how he has performed this World Cup after only scoring 28 in his last two innings against Scotland and Namibia. Williamson is capable in these conditions and one of the best players of spin in the world. Look for Williamson to hunker down and try to see New Zealand through to the end of their innings.

Due to his slightly patchy form, odds of 4.00 to be his team's leading scorer could be one of the best bets on offer in this match.

Place a bet on 1xbet by registering with the code 1BETINDIA1 and get a 130% bonus of up to Rs. 13,000 if you bet on Kane Williamson to be New Zealand's top batsman in Afghanistan vs New Zealand T20 World Cup.